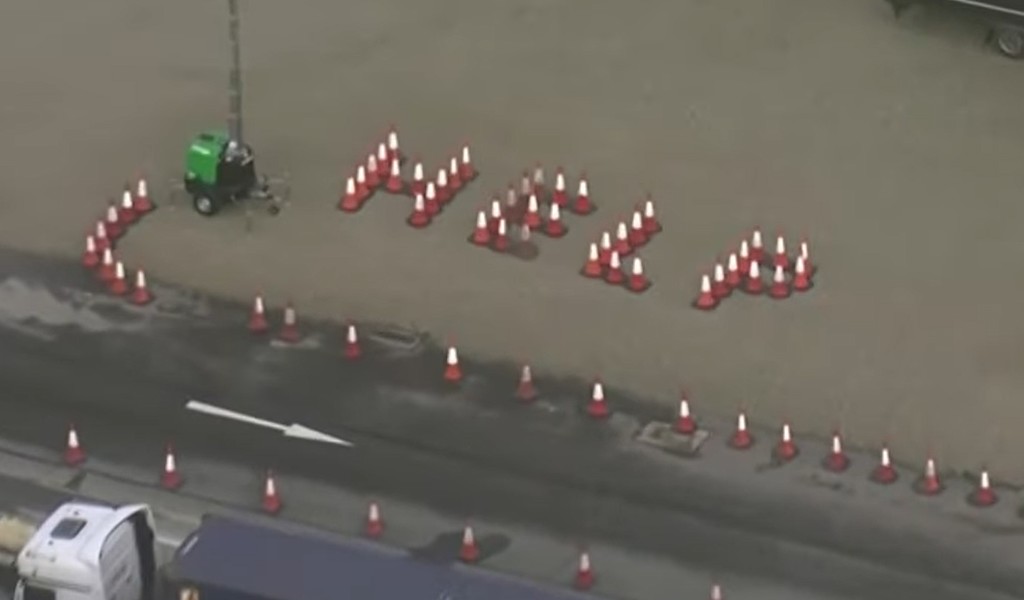 Truckers stranded in Kent while waiting to be tested for coronavirus have spelled out the words help using traffic cones at the Manston Brexit Lorry Park.

Testing has finally got underway both at Manston and on the M20. However progress is still slow, despite the additional help provided by French firefighters.

As of around 11.00 GMT today, approximately 1,000 lorry drivers had been tested according to Kent Online.

In some instances, the lack facilities available to drivers in Kent has seen tensions boil over, as seen in the video below.

There have been arrests as lorry drivers stranded in Dover clashed with police. The drivers have been protesting about what they say is a lack of facilities – such as toilets or food.#COVID19 testing has begun at the Kent port – more here: https://t.co/NOqYBdYoLe pic.twitter.com/sqIqXKugQo

Nevertheless, the local community in Kent, whether it be organisations, individuals or businesses, have all done their bit to try to help the stranded drivers. In the last few days, we’ve seen the Sikh community deliver curries, Ramsgate Football Club deliver pizzas, and local citizens bring food and supplies to truckers.

Yesterday even more people and organisations did their bit to help. A fund was set up to get hotel accomodation for drivers, while Dominos Pizza delivered 1,000 free pizzas.

Some truckers are now close to getting on the ferry and driving home to their families, though thousands are unfortunately still stuck in Manston and the M20 while the backlog is cleared.

After a long and miserable wait, lorry drivers from #Manston inching their way down the ramp and finally into the port of #Dover to be tested and then hopefully get on their way to the continent for Christmas ⁦@bbcsoutheast⁩ ⁦@BBCBreaking⁩ pic.twitter.com/2n7UzcB7x3

Fortunately, some of the obstacles for drivers entering the EU from the UK are being removed. Eurotunnel and the port of Calais will stay open throughout Christmas, while drivers’ hours regulations in the UK, Belgium and the Spain have been relaxed.

In addition, the French Government has announced that all trucks travelling from the UK into France will not be subject to the truck bans applicable on December 24th, 25th, 26th and 27th of December. Truck bans in Germany have also been relaxed until January – more details here.