Following criticism on lorry drivers' Facebook groups, a truckstop located by the M25 has defended the £50 nightly parking charge it will introduce on 1st January 2022. 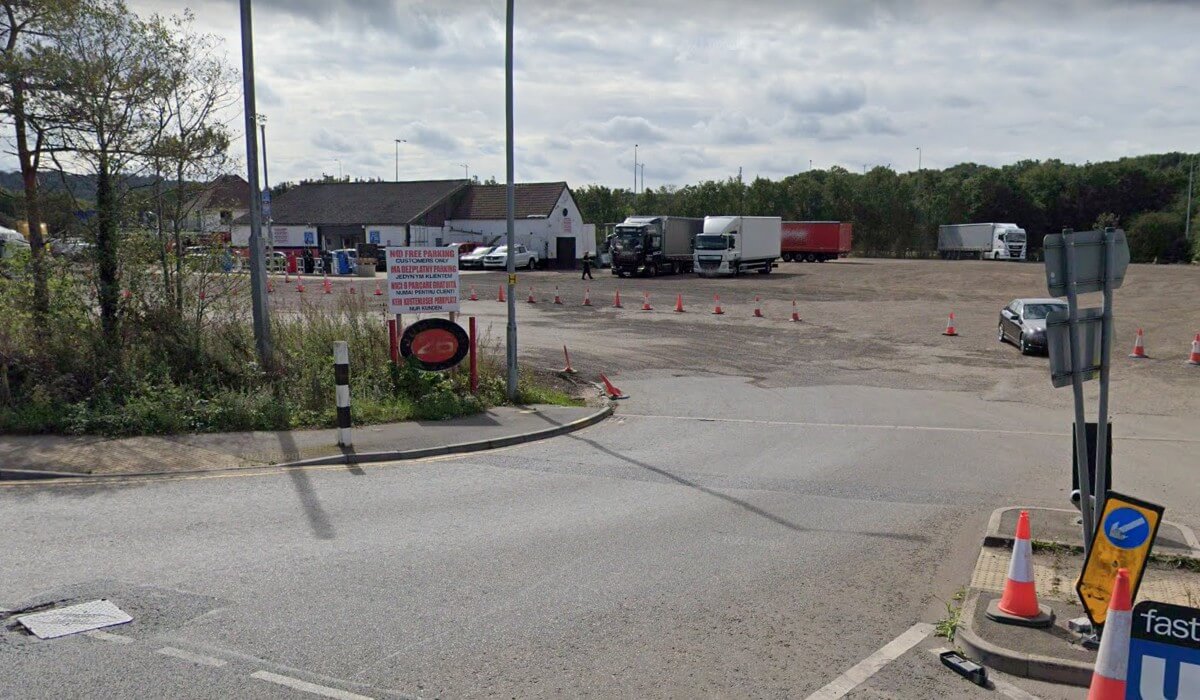 News of the eye-opening charges emerged on the ‘LDUK – Lorry Drivers UK’ Facebook Group yesterday, when one user posted the following:

“It would seem that Waltham Abbey truck park will be the most expensive parking in the country when they put their price up in the new year to £50 a night, not joking FIFTY QUID.” 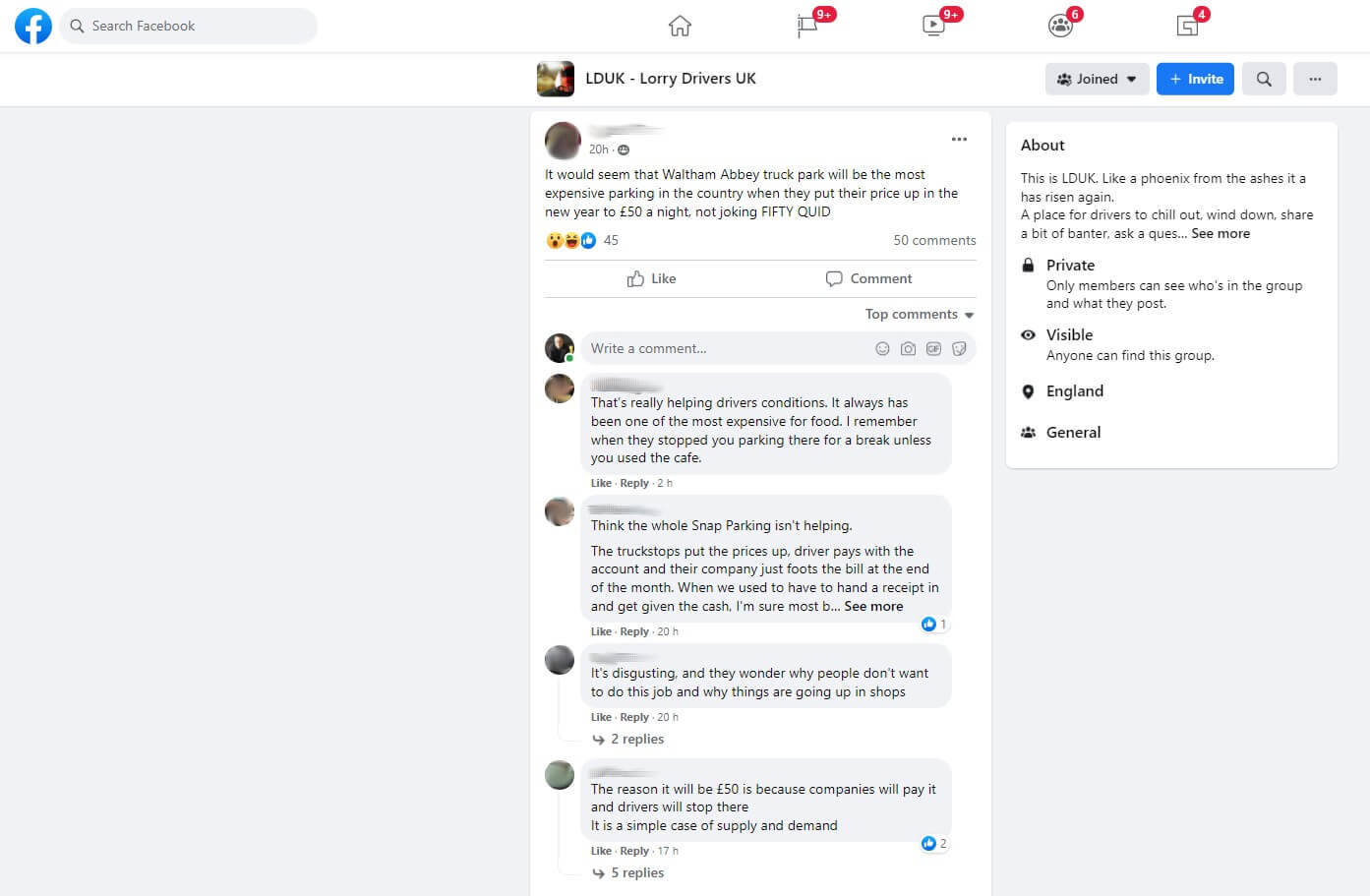 The reaction to the news from other users was unsurprisingly negative.

One trucker described the price as “disgusting”, while another joked “it would be cheaper to get an infringement”. Some comments were nonetheless more pragmatic, with a few drivers saying that the laws of supply and demand, as well as the truckstop’s convenient location, mean the facility will have no problems attracting customers.

One driver who was stunned by new rates contacted J26 Truckstop to confirm the news.

To his surprise, as well as several social media users, the reply he received was rather on the blunt side. When most business owners raise prices, it is normally explained by inflation or additional costs in the shape of higher rent, taxes or labour expenses. Alternatively, the increase might be justified by improvements to the overall product or service.

However, in the case of J26 Truckstop, according to the excerpt of the reply that was shared on Facebook, the truckstop simply said:

“Correct. And j26 staff are extremely proud to have one of the most secure parks in the UK. And provide a home cooked meal for every driver.”

“Full to capacity every night. Booking system for English speaking drivers. A concession rate for owner drivers and small hauliers we are well known for.” 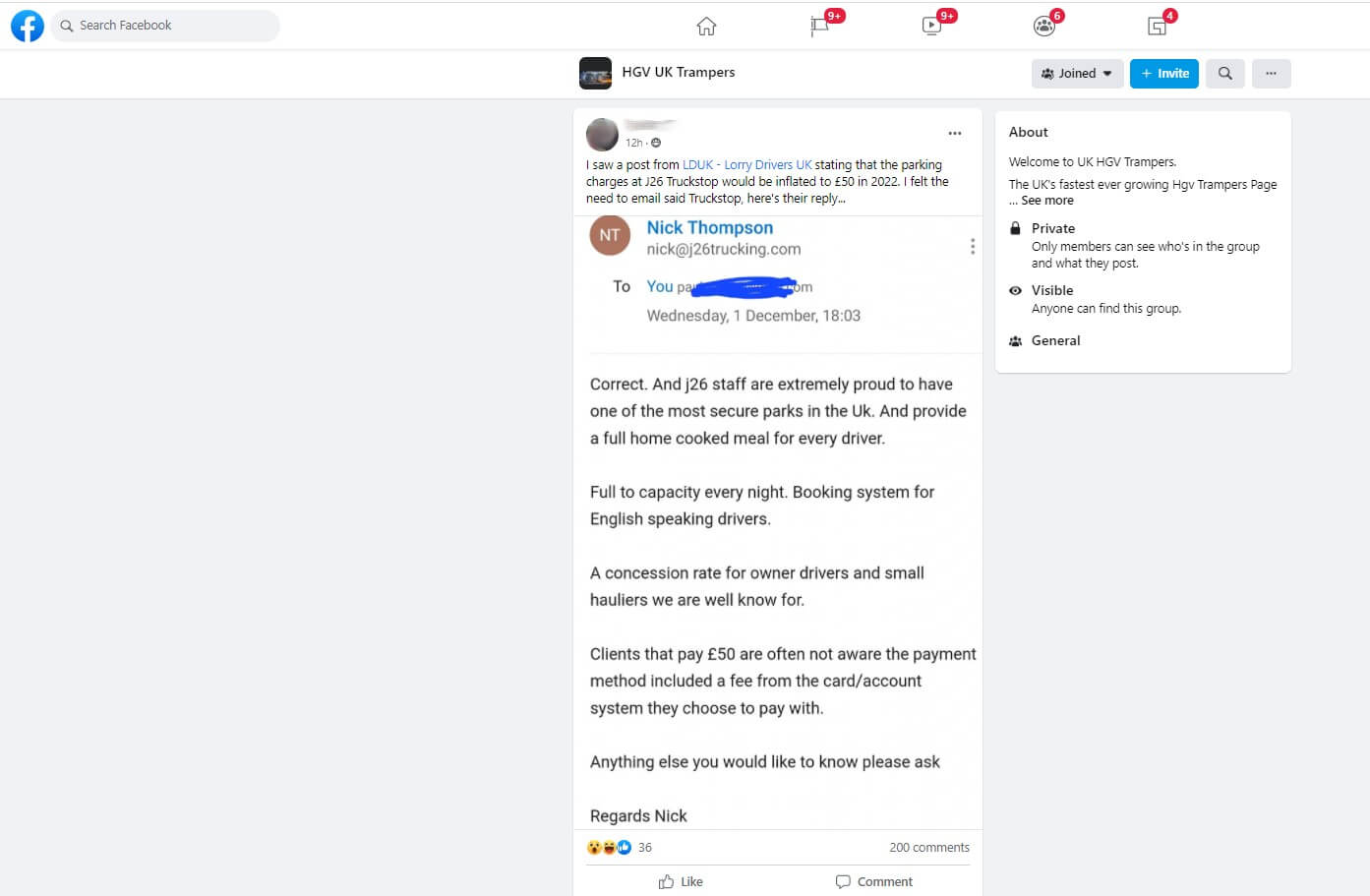 Back in November 2019, when J26 Truckstop faced criticism over the quality of its showering facilities, the venue did nonetheless provide some clarity on why prices were increasing.

Nick Thompson from the Truckstop told Truck and Driver Magazine:

“We are one of the few truck park operators that have managed to stay operational. There is always a debate on the price of parking in the UK; the facts of the matter are we pay huge taxes in business rates and repair bills on toilets and showers that we provide for free. We provide fantastic food for the price included in the parking, and we’re full every night at 6-00pm Monday to Thursday. Friday to Sunday we are catering for 95% continental drivers who have a different requirement to UK-Dutch trampers.”

In the aforementioned Truck and Driver interview, Mr Thompson also revealed that one of the reasons the facility built outdoor “summer showers” was because of the vandalism of its indoor showering facilities:

“We recently had an incident with [prominent British haulier] where an English driver defecated in our inside showers. The management of the company pleaded with me not to put this on social media, with the daughter of the company founder on the phone screaming at me. We had to clear his mess up, so yes [the outside covered showers] it is to prevent vandalism.”

The Truckstop then went on to explain that the cost of dealing with the vandalism on site was in excess of £1,500 a week. VAT and high business rates were also mentioned as factors that influence high parking charges.

Aggregate review websites such as Google Maps show J26 Truckstop is rated better than average by its users. The parking facility currently has a rating of 3.7/5 on Google Maps, based on 2,342 reviews. Other aggregate websites show the venue rated around 7/10 and 3/5, though the number of reviews is too low to draw clear conclusions.

Those who gave 5 star reviews praised the truckstop’s cleanliness and meal voucher scheme, while truckers who rated the place badly stressed high prices and a poor parking surface. Moreover, despite J26 Truckstop proclaiming itself as one of the most secure parks in the UK, at least two Google Maps reviewers claimed their tarpaulins had been slashed while parking at the facility.