The British Retail Consortium, as well as the Food and Drink Federation, both think stockpiling will take place ahead of the expected checks on EU goods from January 1st. However, the latter warns that limited capacity will make this difficult, while the Federation of Wholesaler Distributors says January is “the worst possible time" for the checks to take place. 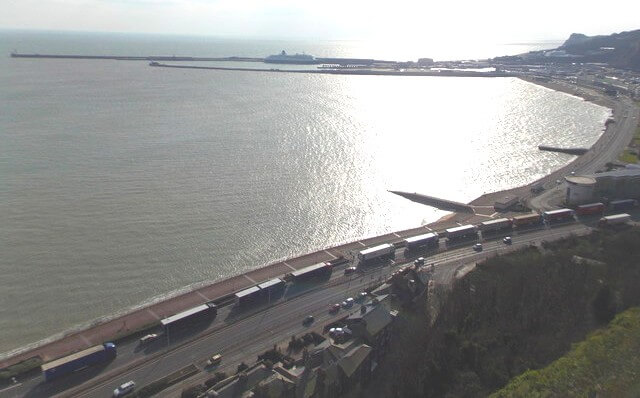 Following the news that major petrol station chains in Great Britain are having to restrict fuel deliveries due to the driver shortage, you could be forgiven for being primarily concerned with the country’s more immediate supply chain struggles.

However, even if Britain’s maxxed-out logistics industry manages to supply goods during the Christmas peak, further challenges are on the horizon in the face of the customs and veterinary checks on EU goods due to begin on January 1st.

Last year, similar checks were implemented by the EU on UK goods, prompting retailers and wholesalers to stockpile where possible so as to avoid any issues caused by disruption. However, as major organisations representing the food & drink, retail and wholesale industries have told Trans.INFO, UK businesses will face challenges building stockpiles before the checks begin next year.

To find out if stockpiling is likely, and to what extent it would be possible, we reached out to The British Retail Consortium, The Food and Drink Federation, and the Federation of Wholesaler Distributors.

Andrew Opie, Director of Food & Sustainability at the British Retail Consortium, told Trans.INFO that some retailers may choose to stockpile EU goods a result of the checks. He nonetheless stresses that it is essential EU suppliers are prepared to deal with the rule changes:

“Retailers are working closely with European suppliers to prepare them for future UK checks. Where necessary, some retailers may stockpile key non-perishable goods ahead of new January Customers declaration and controls. Nonetheless, it is essential that EU suppliers ensure they are aware of new documentation requirements ahead of the new January and July import controls.”

A spokesperson at the Food and Drink Federation also told Trans.INFO that stockpiling is “likely to happen” and that the “Late notice of changes means UK businesses are unpicking their preparations for 1 Oct and that may include revising stockpiling plans that were already in place.”

However, the representative added that “there are limits on what can be stockpiled because of cost, limited shelf life and constrained capacity to store food.”

The Federation of Wholesaler Distributors also responded to Trans.INFO’s request for comment. A spokesperson from the organisation warned that January was the worst time to introduce the checks due to distribution centres already being so full because of Christmas:

“As we found at the end of 2019, when the UK’s food distributors were told to prepare for a hard exit from the EU, it’s existing storage capacity which is the biggest challenge to stockpiling. Wholesalers’ distribution centres are designed to be full at the busiest time of the year, which is the Christmas period, when auxiliary warehousing space is also in short supply. Introducing new import rules in January is the worst possible time for them to successfully build stock in advance of the disruption and delay that the border checks are expected to cause.”