What can give you outsourcing of intralogistics? In this factory work efficiency has increased eight times 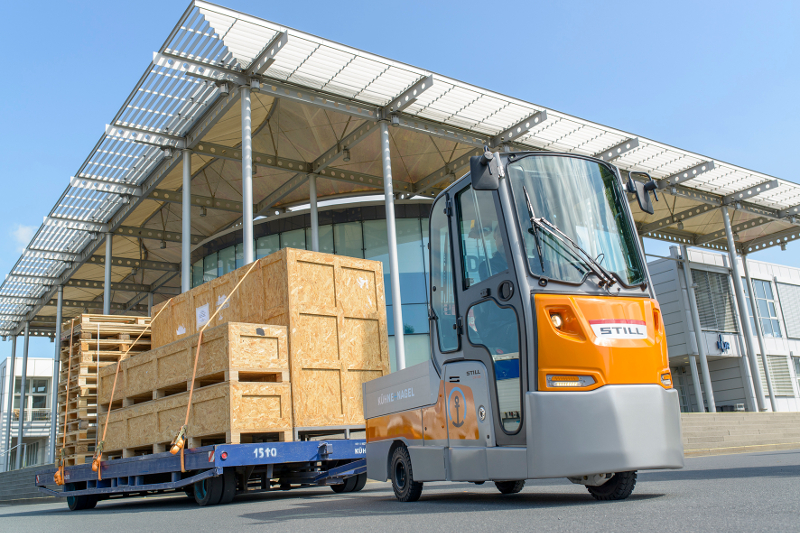 Outsourcing is becoming a common way of finding savings. It is also applied in intralogistics. It consists in entrusting full responsibility for the processes to the external specialized entity. Because the service provider can do some things better and cheaper. This solution has been implemented in the German company Ziegler.

The advantages of outsourcing are usually noticed only when the business faces big challenges. This is the time when it is especially important to make sure that the company does not have to freeze its capital and can control its expenses.

When it comes to handling equipment, flexible solutions may bring much more benefits. Outsourcing is becoming more and more popular, however, it is quite difficult to find typical solutions. The decision which machines and how many of them should be used depends on individual preferences. The service is always tailored to the customer’s needs.

Those who want to use outsourcing services are mainly focused on money. The list of financial benefits depends on many factors. It is especially important that the expenses connected with the outsourcing of the machines are a permanent component of costs in long-term financial plans. In this model of cooperation, it is worth ensuring the predictability of expenses and their linear nature (all fees included in monthly payments).

Outsourcing obviates the need to keep maintenance and repair service in-house for the rented equipment (material and personnel costs). The ‘accounting aspects’ are also crucial. The creditworthiness is not undermined, and the company can deduct taxes for the use of the vehicles. The forms of fleet financing where the user is not an owner are gaining more and more popularity. However, Michał Stanisławski, Director of the Advanced Applications Department in Still Polska, claims that in Poland outsourcing of handling machines is not as strong as in Western Europe.

The outsourcing of the production warehouse and supply chain has been introduced by Ziegler, a German company operating for 130 years (for five years it has been a part of the China International Marine Containers group).

Ziegler manufactures fire-fighting equipment. It provides hoses, clothes and extinguishing systems and even the whole fire engines to industrial plant, airports and railway enterprises (in over 100 countries in the world).

The just-in-time concept ensuring seamless processes and the equipment of the hall and the warehouse were developed together by the logistics services contractor Schwarz Logistik and Still providing transport units.

The company has decided to directly outsource its supply chain because of a large order which required manufacturing over 150 special vehicles.

To increase the number of production lines in its headquarters in w Giengen an der Brenz so that to produce such big series, the company has decided to outsource its warehouse services.

With our infrastructure back then, it was not easy to ensure the efficiency of material flow which would allow us to produce such big series. We wanted to fully focus on manufacturing of the vehicles ordered, so we used the services of a specialized entity which coordinated the movement of materials from the suppliers to the plant in Giengen,” said Thomas Ziegler, responsible for the supply chain.

The authors of the solution prepared the shuttle concept of inventory replenishment and on the basis of common analyses described the requirements for transport units appropriate for the existent infrastructure of the plant.

We have decided that the maximum unit length would be 11 m. Due to the numerous narrow curves in the facility and one-way traffic the vehicles had to be able to get back to the starting point going outside the plant,” said Mirco Adam, Project Manager from Ziegler.

How does it work? Once a day, the factory receives the needed materials from the nearby Schwarz logistics centre. With two diverse transport units, the loads are transported to the buffer zone along the production lines, while the empty containers are moved to the transporter’s loading zone.

When they are back in our logistics centre, the packages are scanned based on the electronic data interchange (EDI) system in our ERP and WMS programmes, and the demand for the appropriate materials is reported. On this basis the picking lists are generated,” explained Dennis Weimert, a representative of Schwarz Logistik.

Thanks to this solution, the materials get to the production plant on the next day, and if necessary the order is sent to the supplier to maintain the continued availability of the materials.

The factory in Giengen has implemented the agile tractors LTX 70 combined with type C frames and LiftRunner module. LiftRunner is a partially automated transport unit, which obviates the need of manual handling of platforms when connecting them to the tractor. It is equipped with two pairs of forks operated from the cabin with automatically driven hydraulic conveyors. The most innovative elements include the ability to support very different sizes and remote control over the load with a touchscreen.

When only the operator enters the cabin, the mechanism will automatically lift the loads up, and when he leaves the cabin, the loads will be lowered for the unloading. The trucks and trolleys are adapted to the transport of pallets, plastic containers of different heights and wooden boxes with the possibility of stacking. Due to the need to get outside the building, the cabin is equipped with a body and the trailers with tarpaulins. 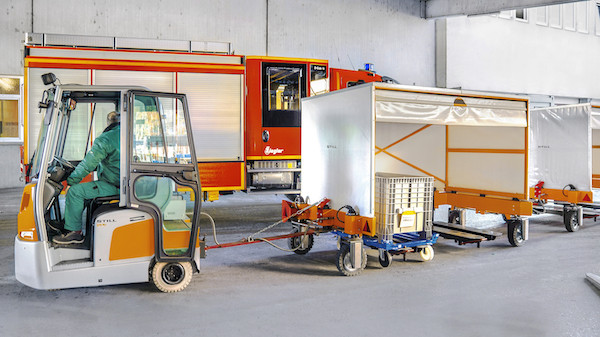 In fact, the transport system LiftRunner with type C frames obviates the need to lift the platform before connecting it to the tractor. The solution is especially beneficial in the places where only manual transport was possible due to the sizes of the loads. In this type of processes the work efficiency when using LiftRunner increases even eight times (one person can transport eight pallets instead of one).

These functionalities make the work easier because the workers do not have to manually pick up heavy materials, and thus every operator licensed to drive a fork lift truck (the unit requires only one operator) may perform order picking tasks.

The functionality of the transport units results from its modular structure. With LiftRunner system, the truck can be connected to the trailers very low to the ground, which significantly facilitates loading. During the transport the trucks are hydraulically or pneumatically lifted so that to prevent their contact with the ground. It allows reducing the wheel load and thus increasing the life of the trucks and limiting the noise during operation. Lifting and lowering the load is automated thanks to the pressure sensor in the tractor’s cabin. LiftRunner responds to the presence of the operator (when the operator leaves the tractor the system will automatically lower the truck to the level when their replacement will be possible). The trailers can be used for transport, rack and basket trolleys and for quarter pallets, half pallets and full pallets of different external dimensions (up to 2 x 1.2 m).

After loading, the transport trolleys are transported to the work stations and replaced with the empty ones. The maximum speed of the unit (depending on the tractor and the weight of the load) is 15 km/h. Each frame goes strictly along the track marked by the trolley dragging it. With a very small turning radius, which is generally 3.9 m, the maximum deviations when turning are only 2 proc. on the whole length of the unit. 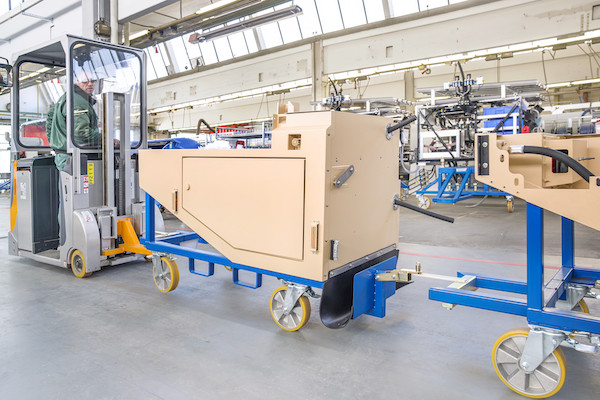 Box trusses and large objects are transported with the multifunctional tractor KANVAN.

The serial electric tractor KANVAN has been modified. It is now equipped with a hydraulic device lifting the front axle which decreases the turning radius of the unit. It is also equipped with a cabin resistant to weather conditions. The truck is integrated with the Kanban procedure. When the system gets a signal about the shortage of the components being transported, the supply process is enabled,” said Michał Stanisławski.

Integrated with shuttle supplies and orders processed by WMS, the units can transport up to 1.6 thousand different parts and components per cycle.

This implementation allowed us to reduce the number of intralogistics tasks by 40 percent and release a part of the resources engaged in them. By reducing traffic we were able to improve its safety,” said Thomas Ziegler.