What happens to truckers who test covid-positive in the UK? 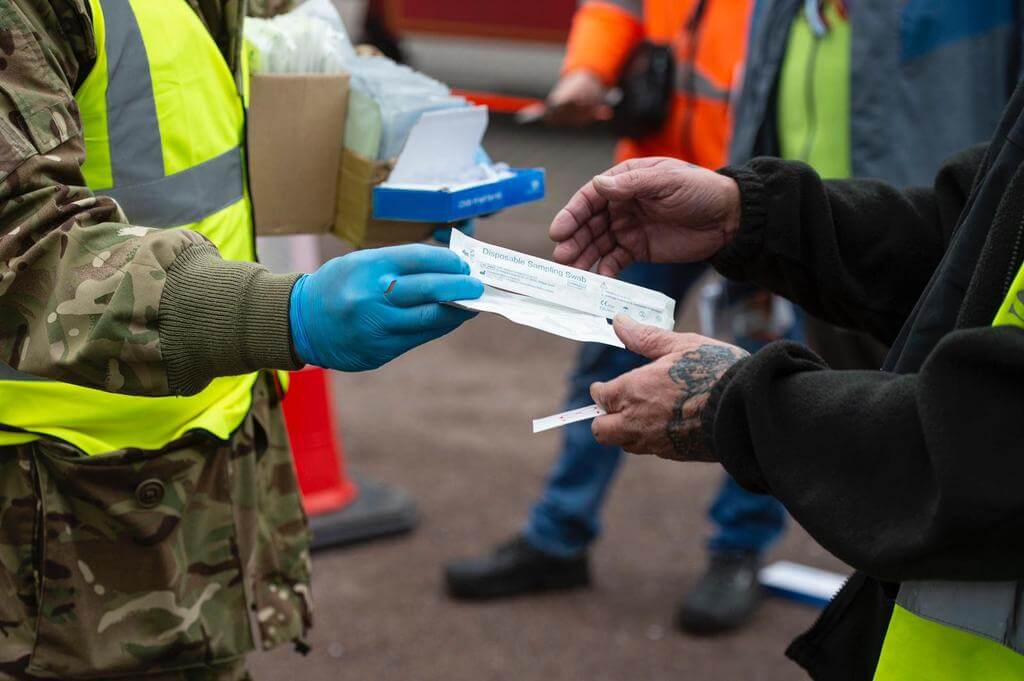 HGVs leaving England for France can only cross the Channel when they provide a negative COVID test that has been conducted less than 72-hours before their departure. But what happens if a driver tests positive?

EU-bound drivers and crews of HGVs, LGVs and vans can get a free COVID test at several haulier’ advice sites and also at the Manston Airport (postcode: CT12 5FF), as well as the Ashford Sevington inland border facility ( at the J10a junction at M20 motorway or for sat nav: 51.132138, 0.914994).

Testing is ongoing for drivers & crew of vans, HGVs and LGVs at 34 Information and Advice Sites.

These drivers at the #ThurrockServices Site took their free test no more than 72 hours before their departure, and continued on their journey to France.

Drivers are nonetheless advised to get tested at one of the haulier advice sites before they reach Kent, to avoid delays. At these sites, written guidance in English, Polish and Romanian is provided, and staff are available to help in other languages using additional written and spoken material.

A rapid-test or lateral flow test is used at these sites, both which provide results in 40 minutes or less. Drivers need to test themselves in the cabin of the truck using a swab and taking a sample from their nose or mouth.

The swab should be then placed into a tube filled with a solution, and finally, drivers should drop some of the solution onto the lateral flow device.

How do lateral flow tests work?

Watch our animated explainer to find out ⬇️ pic.twitter.com/f3qlCMb0xh

Drivers who test positive cannot cross the border but they need to self-isolate for 10 days.

Who needs to self-isolate? What happens if a driver tests positive but his/her co-driver doesn’t?

All drivers testing positive will be required to self-isolate. If they do not have access to a UK residence in which to isolate, they will be directed to covid safe accommodation with on-site parking located across the country, the Department for Transport has told Trans.INFO.

In the event that there are two people sharing the same vehicle and one tests positive, both drivers will need to self-isolate. Accommodation will be provided at the same venue.

Drivers will be accommodated irrespective of whether they have an EHIC card or not.

All we know about the hotels and regulations for self-isolation

There are 4 hotels for self-isolating truckers located across England, all just off major roads and with adequate parking space for heavy goods vehicles and vans. Drivers should drive themselves to the hotel; they will be given a specific address with a postcode which can be used in satellite navigation systems.

According to Kent Online, two hotels have been provided for drivers in Kent: one is on the outskirts of Sevenoaks while the other is in Medway – both places are about an hour’s journey from the lorry park at Manston Airport.

Accommodation, catering and internet access is provided free of charge and hauliers will be informed of hotel processes including how to safely self-isolate on arrival.

During their stay, there will be regular welfare checks in place and access to health support as needed. For those requiring medical attention, this will be provided by the local NHS.

When and how can drivers leave their accomodation?

Once they have completed their ten-day self-isolation period, drivers who have no symptoms will be issued with the necessary documentation to provide at the border as evidence.