An expert from Germany warns against the effects of The Mobility Package. ‘The administrative nightmare’ is coming. 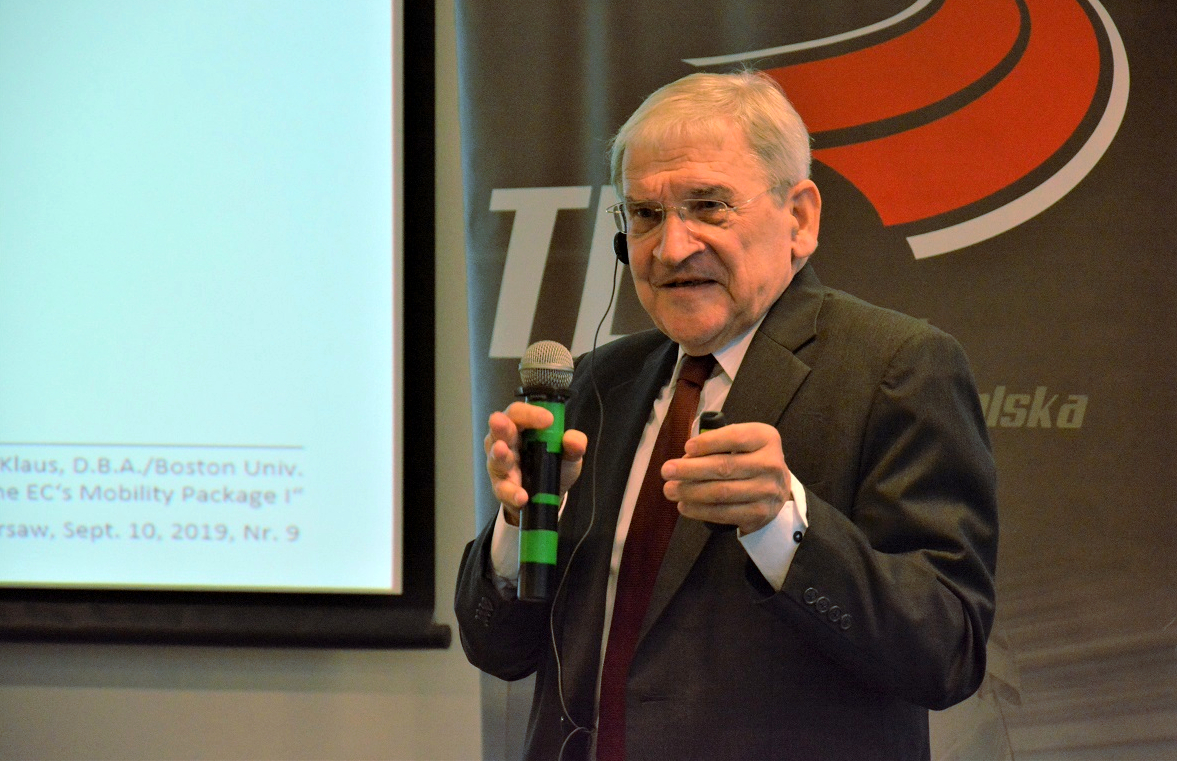 The Mobility Package is a set of rules to regulate the EU’s transport industry. The proposals prepared by the European Commission are unfavourable to Polish carriers. According to a German expert – Professor Peter Klaus (pictured), who prepared a report on the effects of the Package’s entry into force, the consequences will affect the entire EU economy.

We are paying close attention to the EU work on the first part of the Mobility Package, a comprehensive legislative initiative of the European Commission changing the framework in which the road transport sector operates, which has been underway since mid-2017. We are concerned that the final stage of the work on the Package is dominated by deep political divisions, excessive haste, a lack of attempts to reach reasonable compromises, the presence and predominance of journalistic arguments over substantive ones, and what worries us most is the lack of an assessment of the regulatory impact of the new solutions adopted in the course of the work. That is why we decided to order an independent expert opinion on the regulatory effects of the Mobility Package,” explains Maciej Wroński, President of the Employers’ Association Transport i Logistyka Polska.

Peter Klaus, Professor of Logistics at the Frederick Alexander University in Erlangen and Nuremberg, prepared a report on the impact of the entry into force of the Mobility Package, as approved by the European Parliament in April this year, commissioned by the Employers’ Association Transport i Logistyka Polska.

For the purposes of the report, Prof. Klaus conducted surveys among 25 transport companies from ten EU countries. The professor focused on the analysis of the aspects which, in his opinion, will have the greatest impact on the EU transport market and the EU economy. These include:

– a ban on taking 45-hour rest in the cabin, which is impossible to implement due to the scarcity of suitable facilities on motorways and major transport arteries in Europe.

– accusations of social dumping and unfair competition, which should be seen in a broader perspective. Prof. Klaus refers to the example of Bulgarian drivers who, according to the statistics, earn the least in the whole EU. However, the expert points out that their salary is 5 times the average salary in Bulgaria.

– the mandatory return of the driver to the country of registration of the vehicle, which will have a particularly negative impact on the transport sector in peripheral countries. It will also have negative economic (higher probability of empty mileage) and environmental effects.

– the inclusion of professional drivers in the revised Posting of Workers Directive, which will have the most dramatic impact on the European transport market. 70% of goods in the EU are transported by trucks. This will not be possible if international transport is subject to a revised posting regulation, as accounting for the work of drivers will become unfeasible.

Proposed changes to the Package

Prof. Klaus also presented the most urgent proposals for changes to the Mobility Package, which would allow the European transport sector to develop further for the benefit of its workers, customers and the EU economy as a whole. According to him, it is necessary to:

– abandon the proposal on weekly rest periods away from the vehicle and replace it with an intensive infrastructure development programme;

– simplify and harmonise rules across the EU, instead of promoting national protectionism, giving preference to national rules;

– refrain from blocking cross-trade operations, which eliminates from the market many smaller operators from peripheral countries. This would lead to a significant loss of capacity and flexibility in European transport.

Will the Package go back to the Commission?

In April this year, the European Parliament adopted stricter proposals for the Mobility Package. However, MEPs did not adopt a mandate that would allow for further work to be carried out in the framework of trilogue with the European Commission and the Council of the European Union. After the parliamentary elections, the European Conservatives and Reformists (to which Polish PiS party belongs) and the European People’s Party (Polish PO party) voted in favour of amending the proposal. Last week, as established by the Dziennik Gazeta Prawna daily, members of the European People’s Party in the transport committee decided, by 13 votes to 11, to move on to further work on the Mobility Package without returning it for correction. The vote on the mandate for the trilogue is due to take place in two weeks’ time on 24 September.

As a reminder, at the beginning of September, new rapporteurs were elected in the European Parliament’s Committee on Transport. These are:

– Katerina Konecna (GUE/NGL, Czech Republic), responsible for the use of posting in road transport,

– Ismail Ertug (S&D, Germany) responsible for access to the profession and the market. MEP Ertug was also a rapporteur in the previous parliamentary term and became famous for his controversial proposals concerning the Mobility Package.