Such is the extent to which the areas in and around Dover and Folkestone have become a freight traffic nightmare, the Department for Transport has told lorry drivers to take their mandatory breaks before reaching Kent. They have also advised truckers to “ensure they have sufficient supply of refreshments including food and water, and any medication they need". 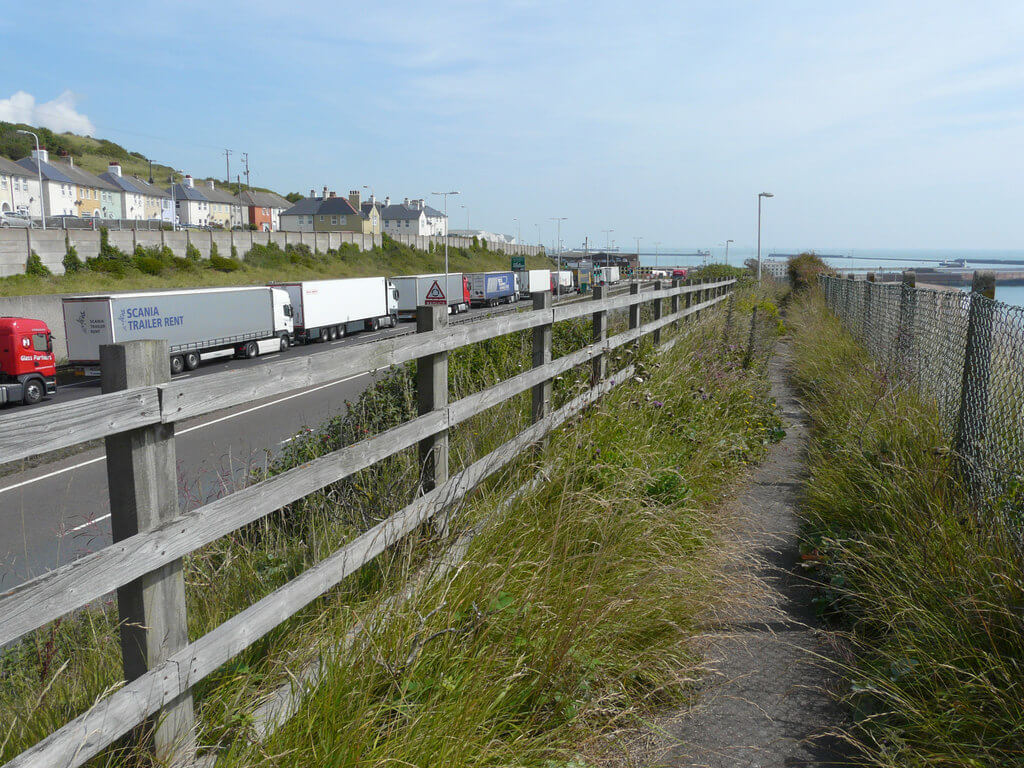 The advice was passed on to the RHA and was addressed to its members. Duncan Buchanan, England & Wales Policy Director for the RHA, tweeted the info out this afternoon.

As the photo in the above tweet shows, HGV drivers will need to join the queue for Operation Brock and could even be fined for non-compliance.

The DfT’s advice clearly shows that lorry drivers could face extremely long delays – long enough even for truckers to bring extra medicine than they normally would. Despite this, little in the way of temporary toilet facilities have been laid on.

Retired lorry driver Sebastian Barrow, who last year led a successful campaign against Kent’s excessive HGV parking ban, told Trans.INFO that the lack of provisions for drivers stuck in jams is “a horrendous scenario that is not going away anytime soon”. In an email addressed to several local and national authority figures, Mr Barrow also said that “It is down to you to sort it out!”

On Sunday, Whites Transport Services predicted on its Facebook Page that “If tomorrow morning Operation Brock is still in place with long queues, it will be one of the worst weeks ever.” Unfortunately, Brock was in place on Monday morning, and given the way things have been in the last few days, that prediction appears to be correct.

At the time of writing, Eurotunnel is running 4 freight services per hour in both directions, while ferry services are running, albeit with delays of up to 90 minutes. P&O services remain suspended, and as we reported yesterday, may not be up and running again until April 19th.

There is nonetheless hope that P&O could be back in action sooner than that. Within the last hour, Joel Hills of ITV News has tweeted a statement from P&O that says the ferry operator hopes to restore sailings this weekend. The same goes for P&O’s Larne-Cairnryan and Hull-Rotterdam routes.

ITV News also understands that P&O crew “accidentally broke one of the ship’s four engines last week”. In response to that claim, a P&O spokesperson said the issue concerning The Spirit of Britain Ferry had “nothing to do with the crewing model” and maintained that regular maintenance work was simply being carried out.

As for the latest traffic info, Google Maps traffic data shows significant build up on the road to the Eurotunnel terminal, congestion that continues all the way long the A20 to the Port of Dover. Data from supply chain visibility provider Sixfold is currently estimating end-to-end Dover-Calais crossing times of 9 hours. You can find the very latest estimates here.

Keeping the spirits up of the EU freight joining Op Brock pic.twitter.com/QIA6mV9KOv

Due to the fear of getting stuck in the freight logjam in Kent, some hauliers are even considering long detours into alternative French ports.

Although crossings such as Portsmouth-Le Havre and Caen take much longer than the Dover-Calais route, the opportunity to have more certainty and avoid serious disruption is one more hauliers appear to be taking. This trend has been seen in a few HGV driver and haulier Facebook groups, where some threads include discussions on alternative cross-Channel sailings.

“What we need is to make Brock work. We have established that up until now it does work, even in times of stress because the motorway is kept open. Once you close the motorway it makes it impossible so the Kent Resilience Forum (KRF) needs to look at what changes need to happen so Brock can cope with what is a very unusual situation where more than half of the freight carrying capacity at Dover has disappeared in one time.”

“At times over the past week we have been plunged back into the worst days of Operation Stack, with the M20 closed completely between Junctions 8 and 9.”