A retired truck driver has sent a candid letter to Transport Secretary Grant Shapps that says an irreversible driver shortage has been created thanks to the UK's “donkey" government among other things. During the letter, the former lorry driver said that the government, the DfT, UK & EU legislation, policing and poor wages had all contributed to the problem. 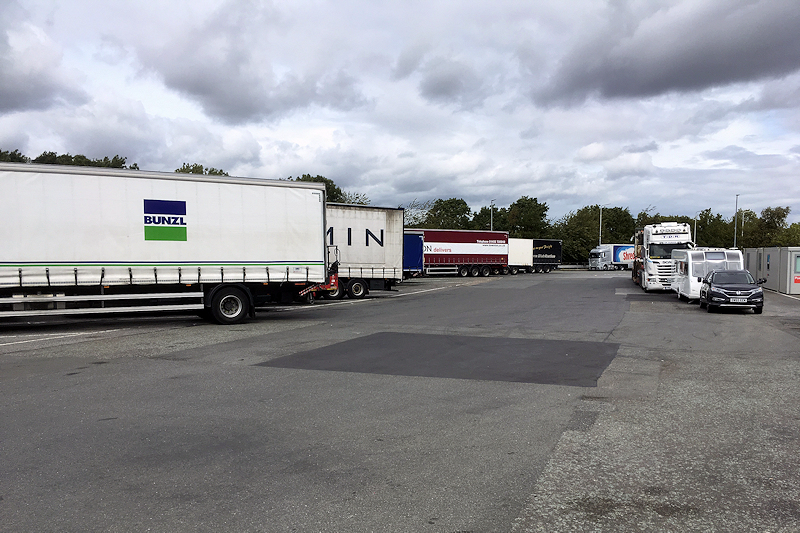 Colin, who penned the letter, spent most of his working life as a lorry driver and started in the industry as far back as the mid-60s. The retired trucker says many of the problems that the mainstream media have recently been highlighting about the HGV driving profession are anything but new.

In the letter, which was forwarded to the popular Facebook Page of Whites Transport Services, Colin explains that while the vehicles drivers use have improved over time, the same is not true in other aspects of the job. One example is the drop in the amount of separate transport facilities for lorry drivers at service stations.

In particular, the ex-lorry driver laments the lack of overnight parking facilities:

“It [the lorry driver shortage] does, however, have far more to do with with the lack of overnight parking facilities that are available and the lack of proper basic amenities for washing, showering and toilet use. Motorway Service Areas have always imposed an overnight parking charge but transport companies and owner operators will not now pay up to £27 a night for overnight parking, even though it does afford a certain amount of basic amenities; that is why so many trucks are to be found parked in lay-bys, side streets, industrial estates and even residential areas.”

Moreover, Colin believes, contrary to what has been suggested by Boris Johnson, that it is primarily the state that should be responsible for providing adequate HGV parking facilities:

“Transport companies can provide the correct vehicles for the work their drivers have to do, but it is for local authorities, the government and oil companies to provide adequate overnight truck parking.”

Like many drivers and hauliers, Colin is also critical of the CPC training that applies in both the UK and EU:

“Having driven trucks around all four home countries for many years, I failed to understand why I should have to undertake thirty-five hours of classroom tuition every five years merely, at the end of the month and with no test or examination, to be issued with a certificate that was proof only of my attendance and did not state whether I had absorbed all I was instructed to or had spent the whole time asleep.”

Problems at regional distribution centres were another issue highlighted by the former lorry driver in a separate letter addressed to Whites Transport Services. Colin says that the delays Whites has faced with RDCs were not uncommon during his time as a driver either:

“On many occasions, I was instructed by my manager to retrieve the delivery paperwork and return the load to the warehouse from where arrangements had to be made, and a vehicle be made available to re-deliver the load on another date. It seems some issues have never improved.”

In his letter to Shapps, Colin also made it clear he is equally unimpressed with the government’s “hierarchy of road users” as well as the rising costs of HGV tests and driver medicals. In addition, he questioned whether young drivers who do pass HGV driver tests would be given opportunities to drive:

“There are long delays in taking the DVSA test, and once passed, how many transport companies will entrust their £150,000 vehicle and its load which could be valued at twice that amount, to a new driver? How many insurance companies will be willing to provide cover for such a young and newly qualified driver?”

Before coming to a close, Colin’s letter to Shapps stresses that due to the aforementioned problems, as well as a desire to keep wages low to limit inflation in shops, the UK’s driver shortage “will never be resolved”.

The ex-trucker adds that the current government “has much to answer for”:

“I feel sad for the future of the road haulage industry, as I do for the National Health Service, Social Services, the agricultural industry, the fishing industry, policing and many more; over eleven years your Conservative government has much to answer for and cannot forever go on laying the blame on the preceding Labour administration.”

“Twenty-first century Britain sees lions being led by donkeys, donkeys dedicated only to enriching their own lives (as shown by the recent comments of Peter Bottomley) and led by the Patriarch in Number 10. Your government has shown itself to be unfit for purpose generally prior to Covid, but particularly since Covid.”

The letter can be read in full here on the Whites Transport Services Facebook Page.

Photo: © Copyright David Dixon and licensed for reuse under this Creative Commons Licence