Haulier’s Brexit optimism obliterated in under a fortnight 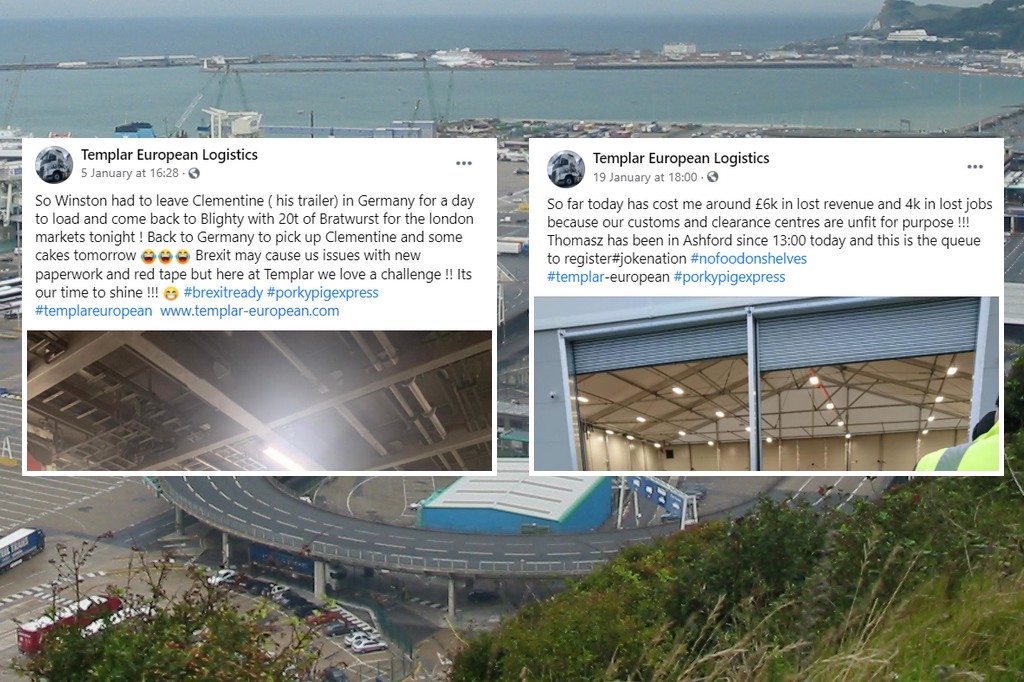 An Englishman’s haulage firm has seen its Brexit optimism decimated in the space of a fortnight after being hit with fines, fees and customs delays that have cost the company thousands of pounds.

Templar European Logistics, whose trucks are adorned with historic English figures like Margaret Thatcher and William Churchill, said on Facebook on January 5th that although Brexit would likely cause some paperwork issues, it was its „time to shine”.

However, within days the company was left ranting and raging at the damage the new export procedures were having on business.

On January 11th, the company posted the following on Facebook:

So my driver does all the covid tests and turns up in Dover and gets told his paperwork is incorrect so we wait all weekend and go back this morning , after 6 hrs of messing about we get sent to Ashford to clear the export and this is the txt’s we get !!! How can the UK f**k up the export procedure so bad !!! Nothing is going out so no one wants to come in , and that my friends is what will screw the food chain !!! Importing is ok exporting is very hit and miss and no one knows the right way.I am lucky this is my first issue all week but some companies i know have had no exports clear at all !!! And dont think its because the companies with problems are small ,the one i have issues with is one of the largest food producers in the UK.

Three days later, the situation was less dramatic. The road transport firm posted that 2 out of 3 of its exports had cleared, which „wasn’t so bad.”

The same can’t be said for January 19th though, when one of Templar European Logistics’ drivers was clamped and fined £187.

The driver had fallen foul of Kent’s new strict parking rules, which were brought in at the end of the Brexit transition period. It turns out the driver had only parked by a cafe due to running out of time at the Inland Border Facility at Ashford.

Commenting on the situation on Facebook, Templar European Logistics described the current export process as „not fit for purpose” and added „the biggest international carriers are pulling out of the UK market. Crazy just plain crazy.”

On the same day, Templar European Logistics also took to social media to say they had lost £6,000 in revenue and an additional £4,000 in lost jobs.

Unfortunately, things didn’t appear to improve much the following day, as the road transport firm once again criticised the export processes at the UK border.

On this occasion, the haulage company claimed it is now easier to get goods into the UK than the other way round, and added that the UK had „bent over and took one right up the a**e off the EU.”

Yesterday saw the haulier embark on another Brexit-related rant. According to this Facebook post from yesterday lunchtime, one of their drivers had been stung with fines for illegal parking and being without a Kent Access Permit.

Before the night was out, the haulier’s Facebook profile compared Ashford lorry park to a refugee camp and said that the „Great British nation are the laughing stock of Europe and drivers are bearing the brunt.”

Although Templar European Logistics have clearly been hard hit by Brexit, they do at least have the possibility to change their business model.

This is because the company, run by Englishman Matthew Garnett, is actually headquartered in Poland. As a result, the company can still deliver loads across the EU and also do two cabotage operations while in the UK.

It is nonetheless important to point out that Templar European Logistics has made no secret of this. It has openly stated it is a Polish company on its Facebook Page.

Meanwhile, the rants from the Templar European Logistics Facebook Page have gone viral, attracting a series of comments from truck drivers and other social media users.

Most comments are understandably sympathetic given the plight the company has suffered in the last week.

However, there are also a flurry of „I told you so” comments in the mix too, while one Facebook user joked that the haulier would be better of transporting unicorns if it wanted to clear customs faster.