How policy action is key to hydrogen reaching its decarbonization potential 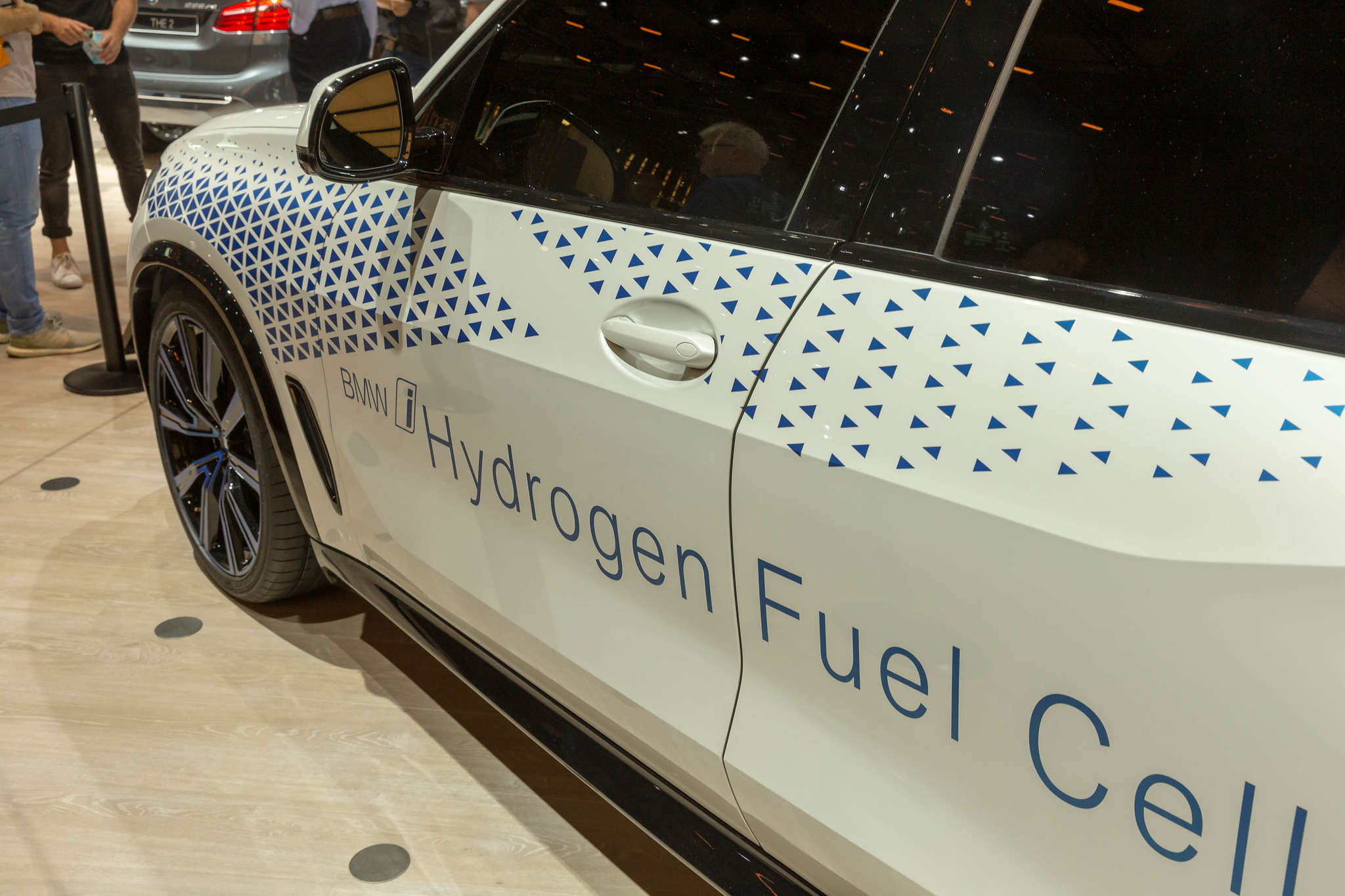 This text, written by Sverre Alvik, Director of Energy Transition Outlook at DNV;  Jørg Aarnes, Global Lead – Hydrogen and CCS at DNV; and Anne Louise Koefoed, Principal Researcher at DNV has been republished in accordance with the Creative Commons Attribution-NonCommercial-NoDerivatives 4.0 International Public License, and in accordance with the World Economic Forum’s Terms of Use. It was originally published here on the World Economic Forum website.

Hydrogen has a crucial role to play in the energy transition, decarbonizing sectors that cannot be electrified, like aviation, maritime, and high-heat manufacturing. Being rightly prioritized for use in these sectors, hydrogen and derivatives such as ammonia will account for 5% of world energy demand by mid-century, according to DNV’s new Hydrogen Forecast to 2050 – our independent view on the world’s most likely energy future.

To meet the targets of the Paris Agreement, however, our most likely forecast for the uptake of hydrogen and derivatives would need to triple, meeting around 15% of world energy demand by mid-century.

This future is feasible, but it will require urgent, significant policy interventions – in the form of stronger mandates, demand-side measures giving confidence to producers, and higher carbon prices.

The uptake of hydrogen will differ significantly by region, heavily influenced by policy. Europe is the forerunner, with hydrogen set to take 11% of the energy mix by 2050, as enabling policies both kickstart the scaling of hydrogen production and stimulate end-use. OECD Pacific (hydrogen 8% of the energy mix in 2050) and North America (7%) regions also have strategies, targets, and funding pushing the supply-side, but have lower carbon prices and less concrete targets and policies.

Greater China (6%) follows on, recently providing more clarity on funding and hydrogen prospects towards 2035, coupled with an expanding national emissions trading scheme. These four regions will together consume two-thirds of global hydrogen demand for energy purposes by 2050.

The uptake of hydrogen will differ significantly by region, heavily influenced by policy. Image: DNV.

There is currently unprecedented interest in renewable and low-carbon hydrogen as an energy carrier, fuel, and clean molecule. However, there is still a long way to go: first for investment to flow beyond research and pilot projects, and second to realize many large-scale hydrogen projects and develop or retrofit infrastructure.

We forecast that $6.8 trillion will be spent on producing hydrogen for energy purposes from now until 2050, in order to scale up to meet 5% of energy demand, with an additional $180 billion spent on hydrogen pipelines and $530 billion on building and operating ammonia terminals. As impressive as these figures are though, much more investment will be needed in hydrogen, and sooner, to ensure a Paris-compliant energy transition. 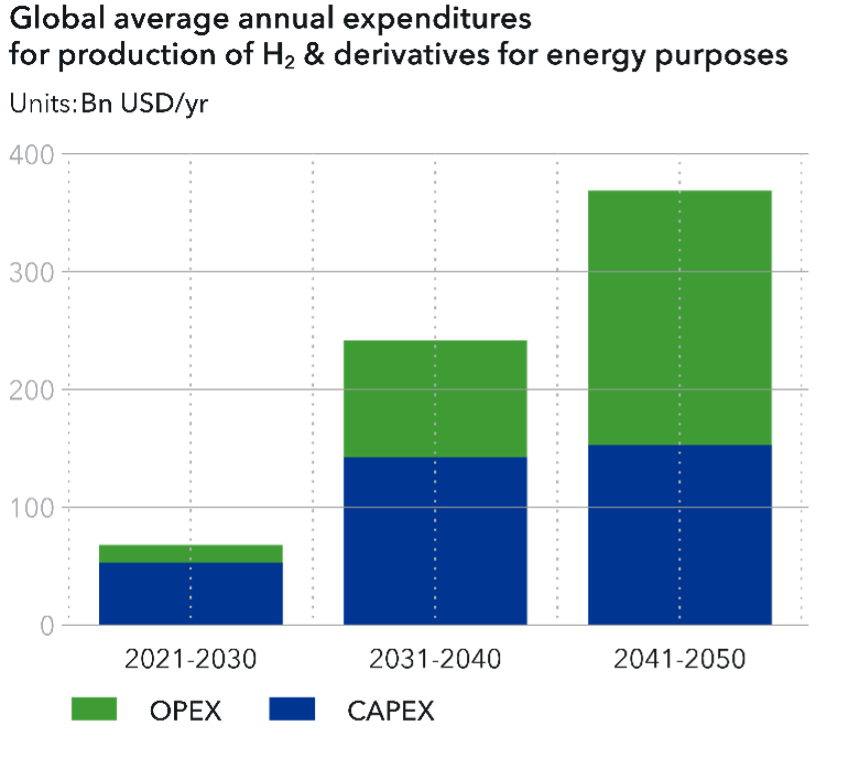 The market and value chains for hydrogen as an energy carrier are in their infancy – even as the potential has been debated for decades. Image: DNV.

Efficiencies, economics, emissions, and geography key to determining viable value chains. The market and value chains for hydrogen as an energy carrier are in their infancy – even as the potential has been debated for decades.

Scaling hydrogen value chains will require managing risks related to safety and public acceptance, technological innovation, and employing policies and measures to make hydrogen projects competitive and bankable. More than this, policies need to support the scaling of renewable energy generation and carbon capture and storage, as crucial elements in producing low-carbon hydrogen, and regulatory frameworks are needed to provide confidence in the low-carbon credentials of hydrogen.

Which policies and regulations are set to have the most impact on scaling hydrogen?

1. National strategies, with timelines and targets, are the first step to creating a stable planning horizon and certainty for stakeholders.The second step is to establish more costly fossil-energy carriers until hydrogen value-chains become economically viable.

2. Technology-push policies are needed to advance technologies along the entrepreneurial and technology development cycle from R&D and piloting to scale up. Government funding programmes with investment grants/loans to capital expenditures (CAPEX) will be the dominant early-stage form of support.

3. Demand-pull policies are needed to create demand for renewable and low-carbon hydrogen in new applications and for the established non-energy hydrogen industry to switch from unabated fossil fuels. Government funding programmes are also available to hydrogen consumers to cover capital expenditures to convert process technology and equipment to use hydrogen. This alleviates the ever-present worry for companies investing in hydrogen production about where the demand will come from, at what level, and crucially, when.

4. Fiscal policies, such as carbon pricing, pass on carbon costs to emitters, encouraging the use of low or zero-carbon hydrogen. They are needed to stimulate innovation and close the cost gap between conventional unabated fossil-fuel-based technologies and new hydrogen-based technologies. New market-based instruments such as contracts for difference (CfD) can help lower operational costs and provide predictable terms for both producers and end-users.

6. Standards provide clarity and harmonization on the technical and safety aspects of hydrogen needed to ensure secure and reliable supply. International collaboration is pulling government and industry players together, facilitating harmonization and exchange of best practices.

The challenge is to manage all of these factors and plan at the level of energy systems, enabling societies to embrace the urgent decarbonization opportunities presented by hydrogen.

In our latest research, Hydrogen Forecast to 2050, we consider this challenge and dig deeper into what is needed to build value chains and scale the hydrogen economy, looking across production, transport, and end use, and addressing key issues such as safety and investment risk.