In the European Union, work is continuing on the draft Mobility Package and the Posting of Workers Directive. The aim of changes in the EU law is to facilitate the provision of services to entrepreneurs while ensuring fair competition and respect for the rights of employees working in one Member State and temporarily sent to another country. Although transport is to be covered by the provisions of the revised directive, it will only happen when the Mobility Package enters into force.

Jochen Eschborn, managing director of the German international forwarding association E.L.V.I.S. agreed to answer a few questions and present his opinion on the consequences that the upcoming provisions might have on transport industry.

There is an intense debate in Europe about tightening the directive on posted workers. The principle of „equal pay for equal work” is strenuously pushed. How do you assess the idea of introducing equal pay for employees?

Jochen Eschborn: In the spring of 2017, under the first mobility package, the European Union announced changes in social regulations in the transport sector. Since then, many different solutions have been proposed. The introduction of the principle of „equal pay for equal work in the same place” is just one of the aspects considered. I believe that the package should always be assessed as a whole. In my opinion, introducing a fair remuneration for drivers is a right and important move. At the same time, the effects of changing regulations for the European transport market cannot be underestimated and should be taken into account when creating a transnational concept of social legislation.

And what about cabotage? Do you consider the time constraints proposed to be reasonable? What consequences do you fear?

Also in this case, a number of different proposals for changes to the rules on cabotage are under discussion. Depending on the variant, the suggested time constraints range from 3 to 7 days until the ban is lifted. In my opinion, each of these solutions has its pros and cons. In my opinion, the main task of politicians should be to find solutions that would facilitate the functioning of the transport industry and not to introduce additional difficulties. The EU can achieve this on the condition that it takes into account the way the transport industry functions and that the rules are defined better than before.

What legal and economic consequences could be exacerbated by the provisions on posting for the forwarding industry?

At this stage, we are unable to assess this. The European Parliament has just rejected the proposals of the Transport Committee in its current form. The final negotiations will probably take place in October. Until then, things can still change.

In recent years, many attempts have been made to circumvent the provisions of the posted workers directive. Do you think that an additional tightening of rules could lead to an increase in the number of such cases? I am thinking especially of small and medium-sized enterprises, which, being overwhelmed by the bureaucracy resulting from the new regulations, will try to stay on the market in this way.

Companies that deliberately attempt to circumvent the posting regulations usually do so for criminal reasons, and not because they cannot cope with excess formality. These types of cases will always take place. However, I hope that future legislation will be clearly defined to such an extent that the gray zone will be reduced. Many illegal practices stem from the fact that current legislation allows it. New regulations with a clearly defined scope of application, aiming primarily at reducing bureaucracy, should primarily offload and not burden the transport industry.

German companies have complained for years that they are eliminated from the market by companies from Eastern Europe. Meanwhile, you often willingly cooperate with partners from Poland, for example with Kommodas. What prompts you to do it?

Capabilities! I usually try to see opportunities and not problems. The example of Kommodus clearly shows that such cooperation gives wider perspectives and opens markets for both parties. Cooperation allows us to broaden the spectrum of services offered, which benefits both the Polish and German side. Why not take advantage of this opportunity? In such cases, I do not think in national terms.

Lack of drivers is one of the biggest problems of the German transport industry. According to the latest data from the Federal Freight Union, about 20 percent of trucks are at a standstill. Recently, the German government launched the „Driving in Your Future” program, which aims to help migrants acquire the qualifications of professional drivers. How do you rate this program? Is this a remedy for the lack of drivers? Or do you have any other suggestions?

I support this project. Who will look at the age structure of German society will quickly come to the conclusion that long-term, we depend on foreign drivers. Of course, this does not change the fact that we need to work on the reputation of the driver profession. Otherwise, we will not find employees abroad too soon.

Last question: What would you like for the forwarding industry? What could work better? And what do you think is working really well?

The already mentioned image of the driver, and with it the reputation of the entire industry is a topic on which we urgently need to work. While the logistics sector is slowly rising, freight forwarders and carriers enjoy less and less recognition. We should all be committed to improving our image. First of all, I mean new solutions regarding the working time that will meet the expectations of the young generation. It is also necessary to reorganize the transport structures. A necessary condition for improving reputation is also the creation of uniform European standards ranging from the recognition of foreign professional qualifications to the unambiguous definition of the concept of cabotage. The topic slowly begins to enjoy growing interest among the public. The fear of empty shelves is growing. The professional group of drivers is gaining more and more attention. It can bring many benefits to the industry, we only need to use this opportunity properly. 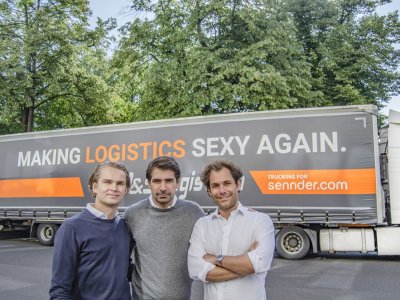 „sennder as a company is completely...

„sennder as a company is completely digital and significantly different from tra...
The EU Council approved Mobility Package regardless of the appeal by eight count...
Raben takes over one of the oldest German forwarding companies, established in 1...