Immigrants again in action. The situation is getting tense in Ouistreham, near Caen 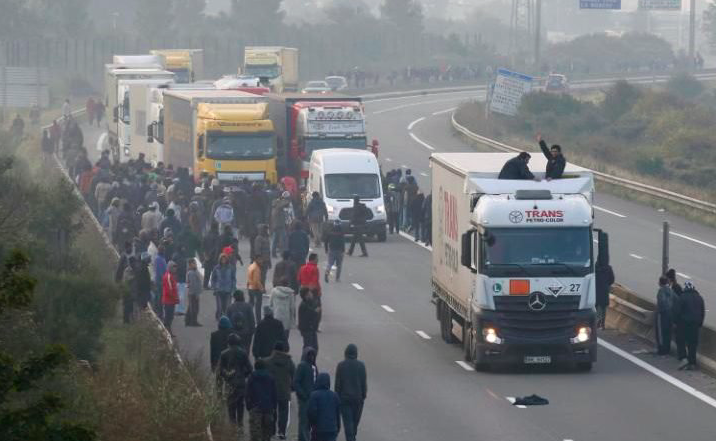 The Road Haulage Association (RHA) informs about the attacks on truck drivers in the Caen area and at the port of Ouistreham. The organization appeals to the authorities in France to intervene.

At first, Calais, now Caen – RHA reports on immigrant attacks on English truckers. The association accuses the local authorities that they do not care enough about security in and around Ouistreham.

Since the Calais Jungle was closed in 2016, migrants, with the sole intention of reaching the UK by whatever means possible, are now focusing their attentions on another coastal weak point, the town of Ouistreham,” says Richard Burnett, president of RHA.

RHA members report that dozens of refugees are occupying the side of the access road, waiting for the opportunity to break into the truck.

The French port of Ouistreham is the new target for illegal immigrants trying to reach the UK.
Up to 200 a day try & some successfully manage to stow away on lorries heading to Portsmouth.
– they are ILLEGALS so should be treated as such & arrested 😡https://t.co/FPp3Mc6L2J

Immigrants moved from the „jungle” to Caen because of increased controls in Calais.

The French authorities must overcome this crisis. They should do it as soon as possible before any of these attempts will lead to a tragedy – for both the migrant and the truck driver who simply wants to do their job – adds Burnett.

Drivers heading for Great Britain from the port of Ouistreham should, therefore, take special care and remember to comply with the requirements of the Internal System of Prevention of Illegal Immigration when transporting to Great Britain.

200 mainly Sudanese refugees are camping around Ouistreham because of the ferry route to Portsmouth
They are targeting ferries running from the town as a potentially easier way to hide on vehicles headed for the UK
All illegal immigrants should be deportedhttps://t.co/Dn7hhCradf