The latest data update from supply chain visibility provider FourKites has illustrated the extent to which sanctions on Russia have progressively seen import volumes into the country decline on a weekly basis. 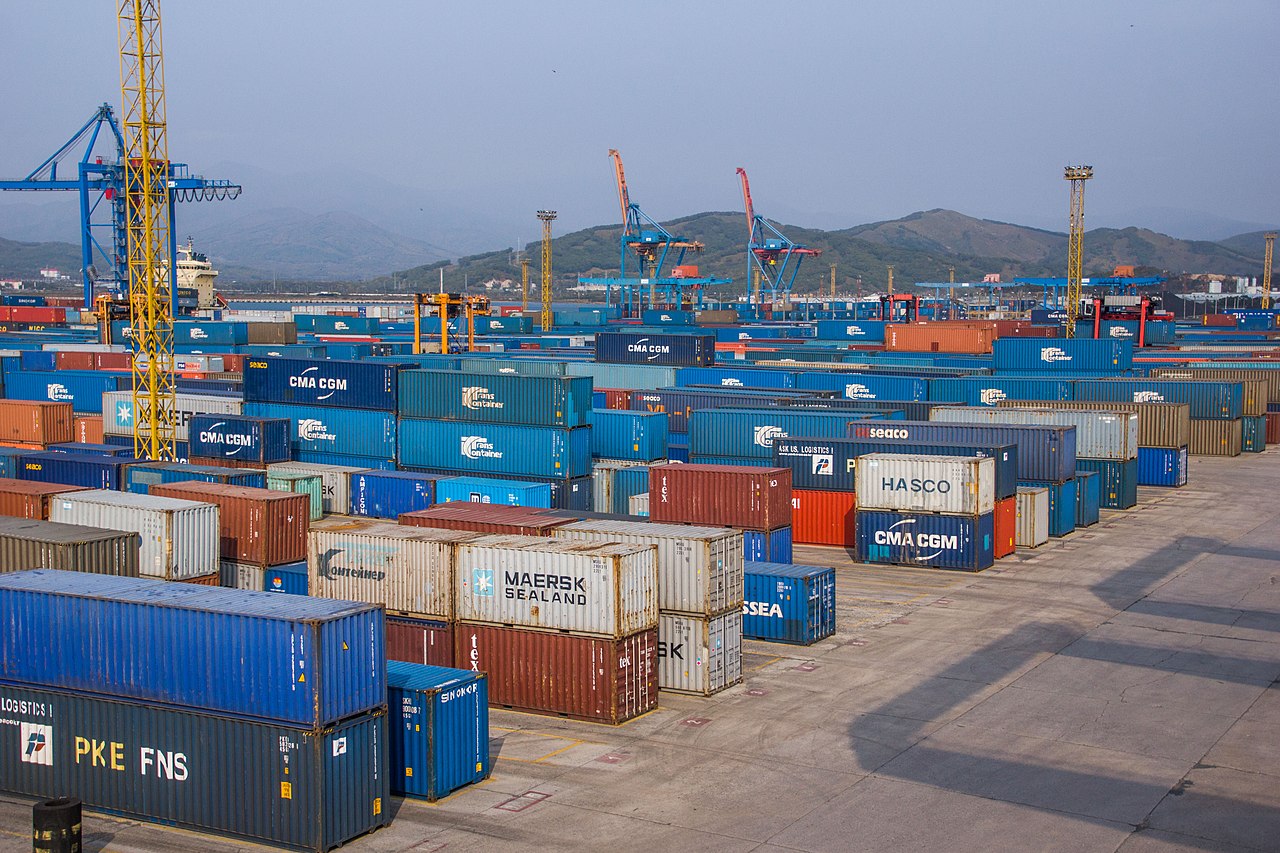 Figures sent to Trans.INFO by FourKites show that import volumes have decreased in Russia every week since the invasion began.

The supply chain visibility provider states that as of the week of 9-15 March, import volumes across all modes into Russia are down 32% week-over-week, and are down 59% in total when compared to the week of 16-22 February.

Meanwhile, in Ukraine, FourKites observes that import volumes are down 88% week-over-week (Image 2), and are down 96% in total when compared to the week of 16-22 February. 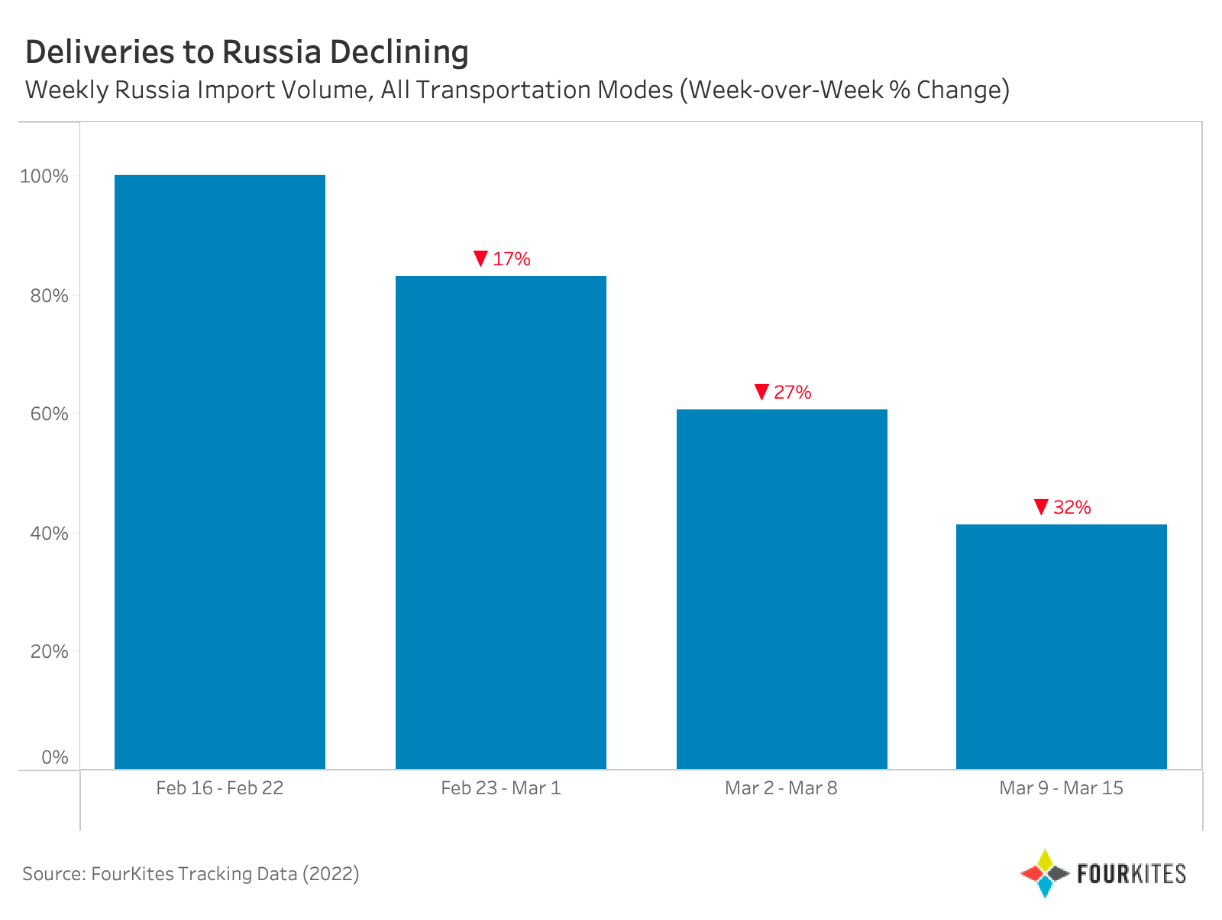 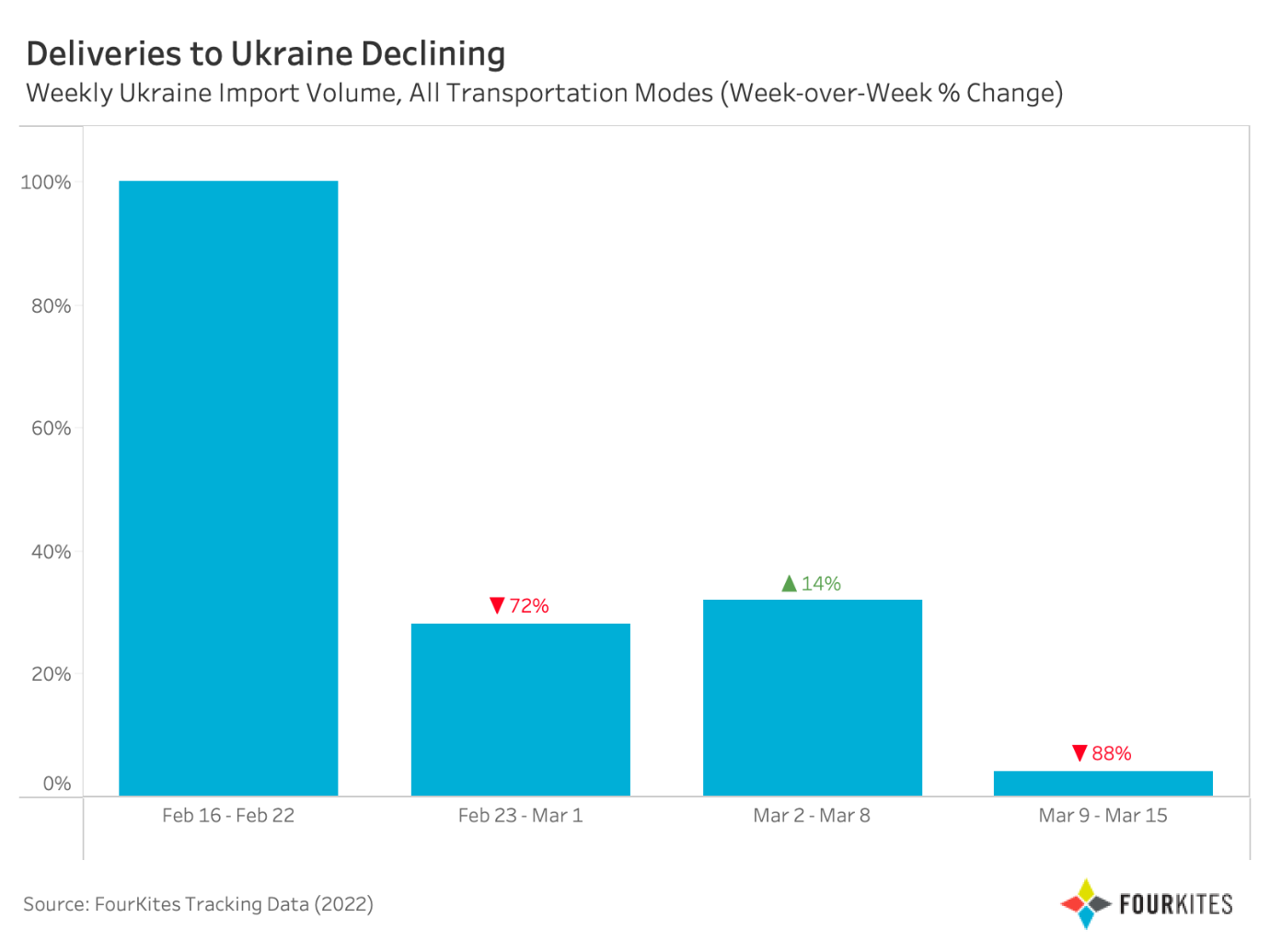 Regarding what imports are affected by the sanctions, FourKites notes it has seen decreases in import volume for both industrial products (Manufacturing, Chemicals, Oil & Gas) and consumer products (Retail, CPG, F&B) (Image 3 below). 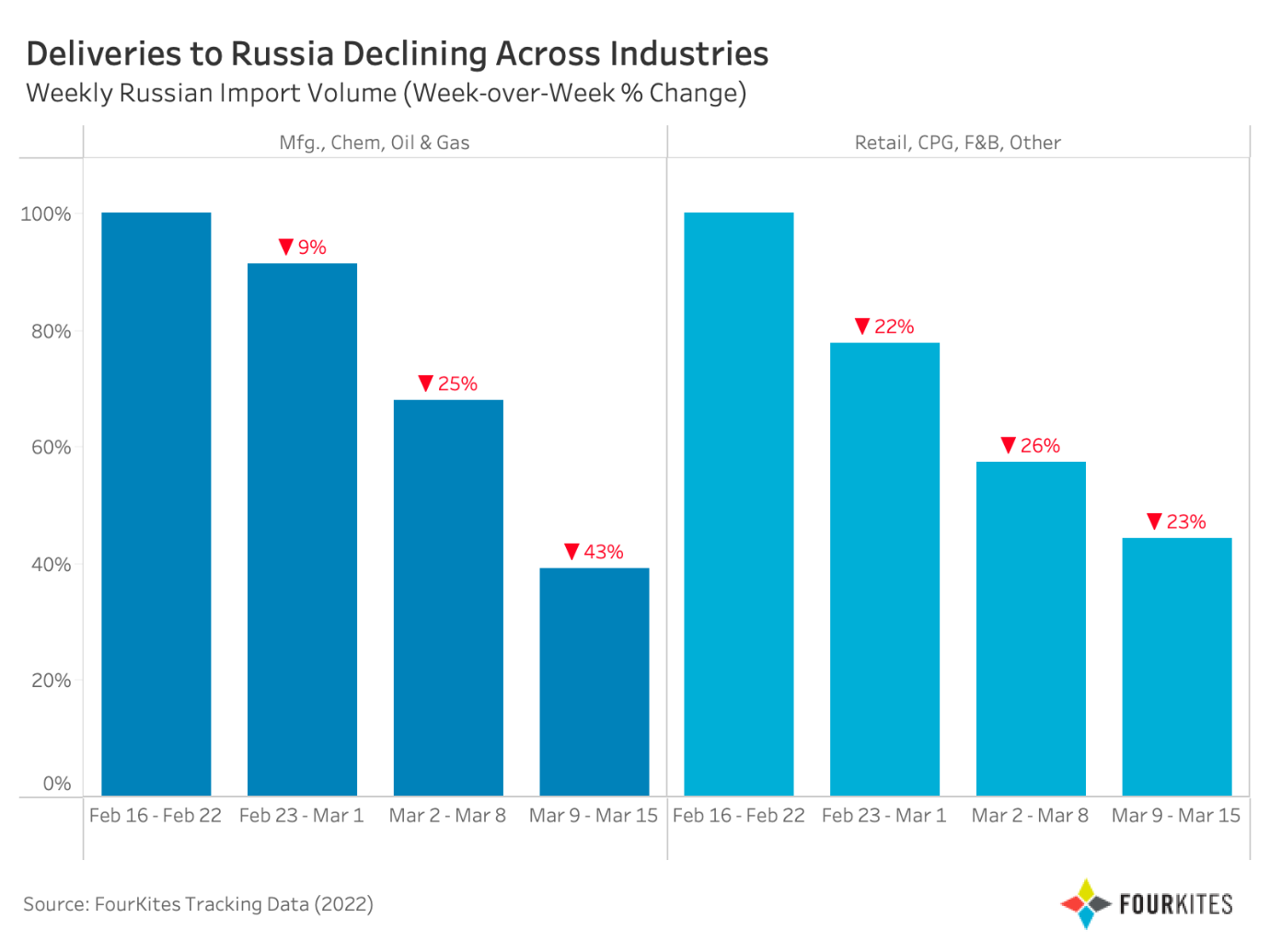 When it comes to Ocean dwell times for exports and transshipments in Europe, FourKites’ data update shows they remain high. On the other hand, dwell times have started to stabilise over the past week.

As of 15 March, both export and transshipment dwell times at European ports are 20% higher when compared to 17 February (Image 4 below).

Import dwell times at European ports have returned to levels seen before the invasion began. 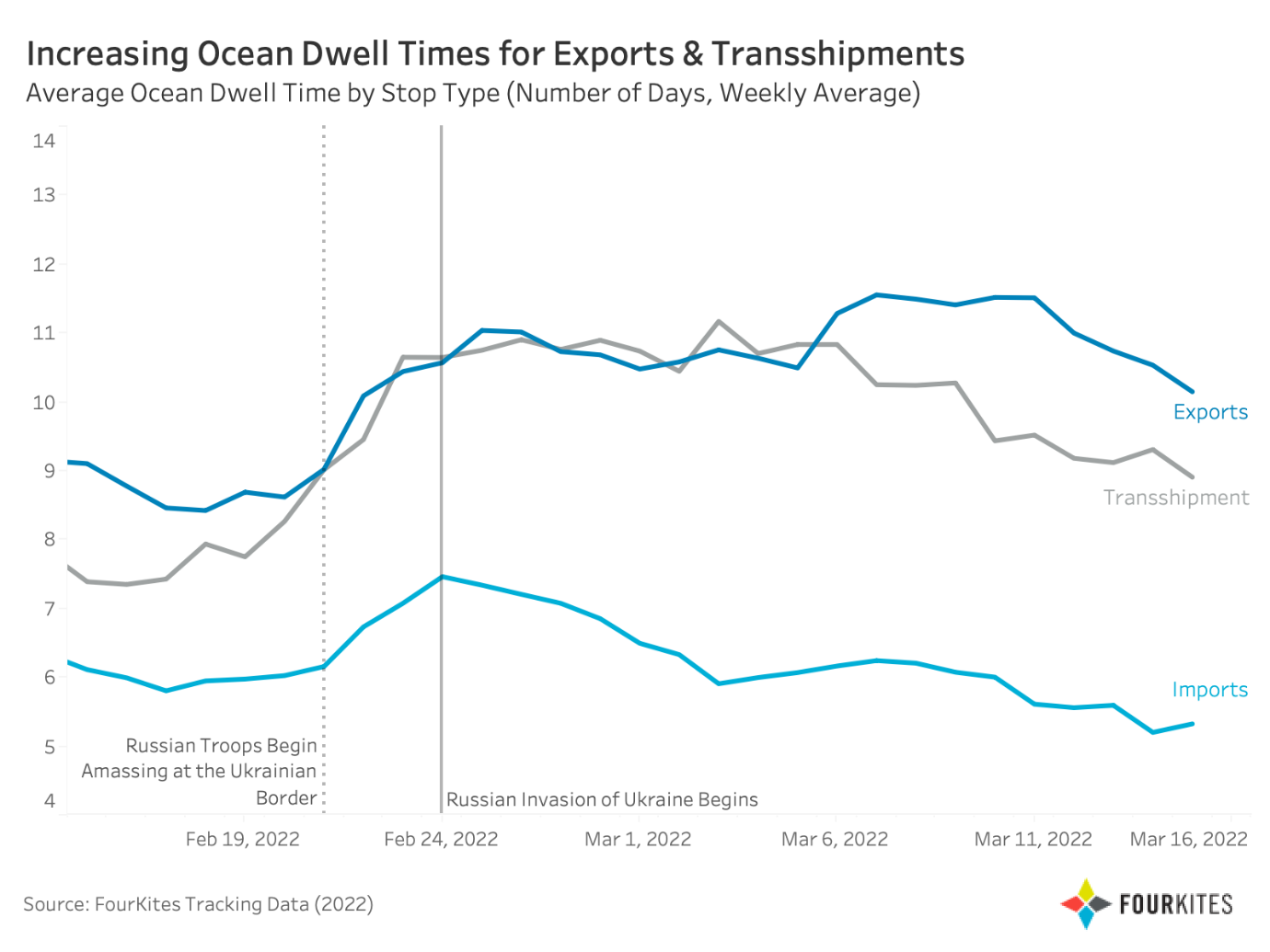 As for Northern Europe in particular, ocean dwell times decreased over the last week, and are now up only 11% when compared to 17 February.

Dwell times for Eastern Europe and Southern Europe nonetheless remain high, up 22% and 35% respectively when compared to 17 February (Image 5 below). 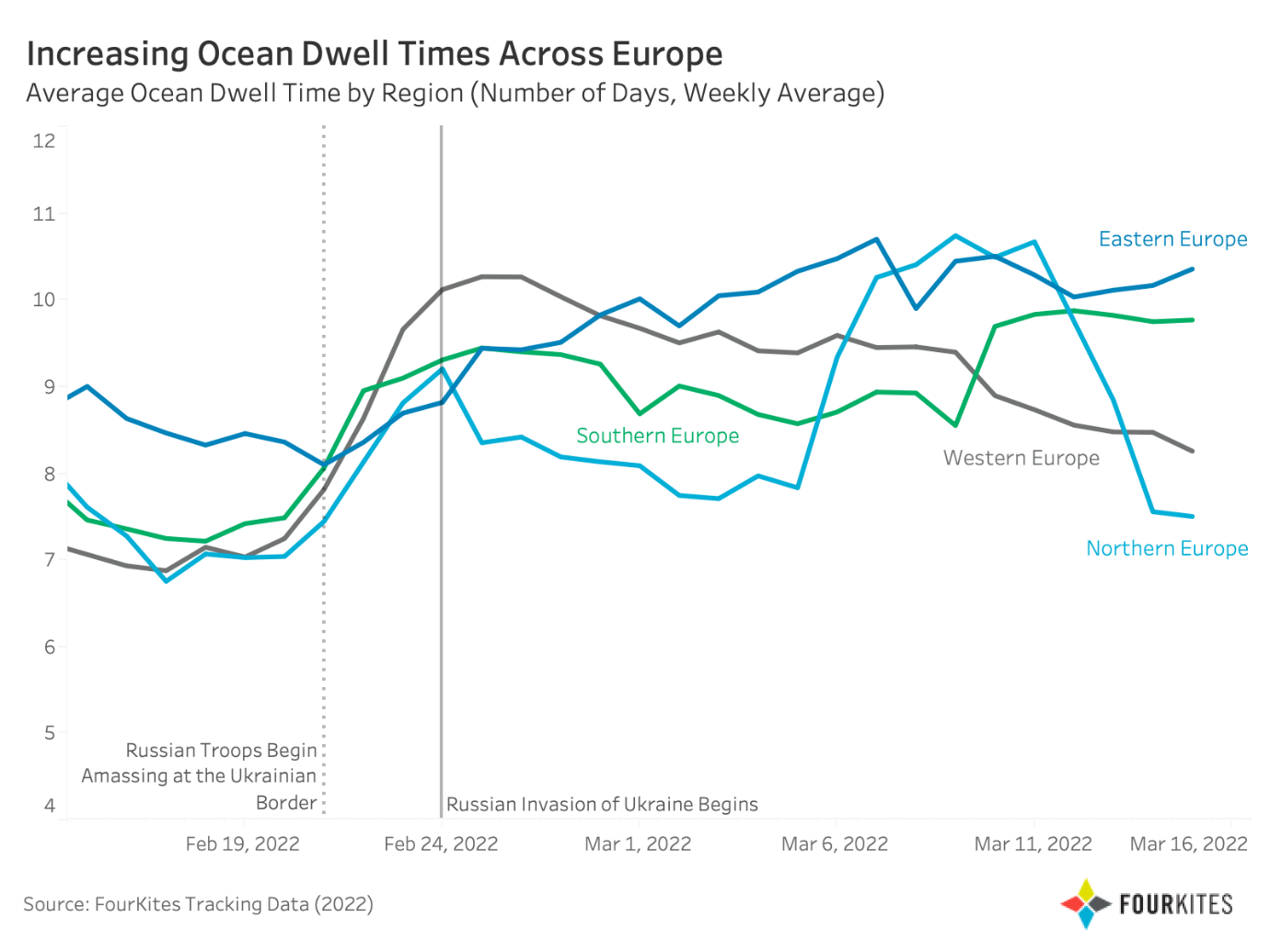 Moving on to road transport, Less-than-truckload delays have started to stabilise for loads traveling to Eastern Europe (Image 6 below).

The percentage of loads delayed is now 5% than before the invasion, down from 19% higher at the peak on 9 March. 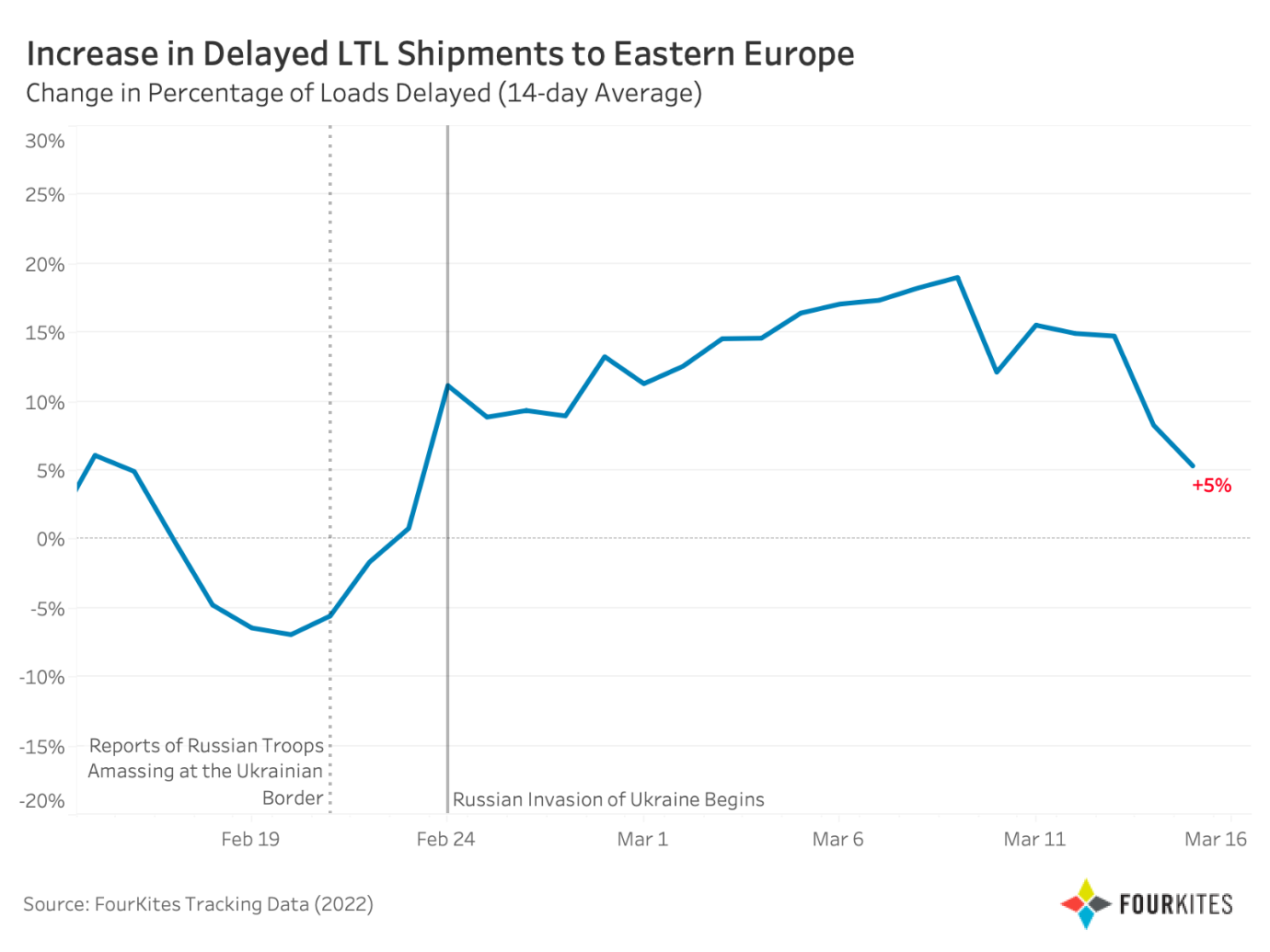 Finally, FourKites also provided an update on fuel prices.  It notes that oil prices are back down to pre-war levels, and that we should see the average cost of diesel drop quite a bit when the metrics are released Monday.

In order for a heavy modal shift to IMDL (intermodal), FourKites states that we will need to see sustained increase in FSC (fuel surcharge). It says the average transit time increase between OTR (over-the-road) and IMDL is significant and will require a concerted demand/supply planning effort. In addition FourKites writes that the dray leg of IMDL is experiencing the same capacity issues as OTR, it’s not a simple model lift and shift.