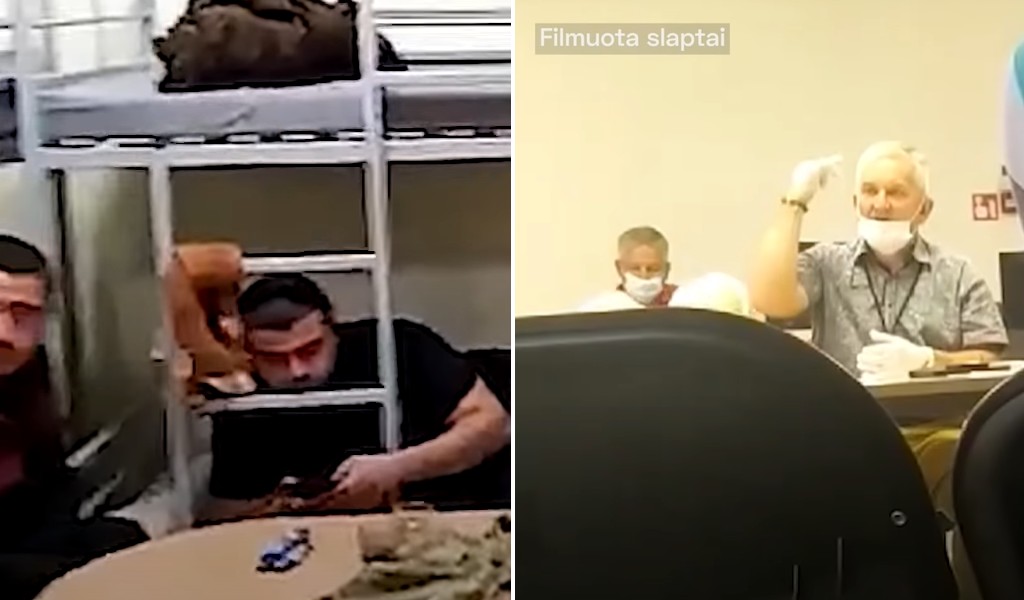 The documentary accuses the likes of Girteka, Hoptrans, Hegelmann Lithuania, Meidovis, Transporto Marisa, Vlantana, Baltic Transline and Kamia of malpractices that show a total disregard for employee wellbeing and safety, not to mention labour laws.

In pretty much each and every case, the aforementioned road transport and logistics companies’ have nonetheless rejected the claims completely.

You can judge for yourselves who is in the right by watching the film for free on YouTube. The video is embedded below and has English subtitles.

The documentary contains so many allegations that it is very difficult to know where to begin. We have nonetheless broken the most serious claims down into separate sections as follows:

Drivers forced to pay illegal deposits off the books

In the film, Audrius Cuzanauskas, Head of the Lithuanian Trade Union Alliance, claims drivers from 3rd-countries working for some Lithuanian hauliers are forced to pay deposits ranging between €300 and €1,000 before they start work.

The money is supposedly there to pay for possible future driving infringements, but is often never paid back. It is alleged the deposits are all off the books, bringing in substantial untaxed revenue in the process.

The alleged deposits, which are referred to in Lithuania as a “barrel” may also be deducted from wages after the end of a driver’s trip. It is said that a standard practice is to take €50 from a driver until he/she accumulates €1,000 in earnings.

Several drivers who have worked at Hoptrans claimed during the film that they were forced to make such payments – in this case €30 euros each.

In response to the claims, Hoptrans’s Director denied the existence of such a driver fund.

Although the documentary found no hard evidence regarding the alleged fund at Hoptrans, the filmmakers point out that Lithuanian haulier Transimeksa was found guilty of the illegal practice back in 2016 (although the company still denies this was the case).

In another section of the film, the Lithuanian Carriers Union states it has evidence of Gricius Logistics getting drivers to sign legal documents that effectively say they owe the company before they’ve started working.

It is claimed that this helps the company insure itself against possible accidents or incidents. In one document shown in the film, the amount owed was over €12,000.

Drivers told to drive on roads with HGV bans

As the documentary moves on, the focus turns to how the drivers work while on the road. According to several driver testimonies in the film, hauliers told them to use country roads instead of motorways with tolls – even if those roads were subject to HGV bans.

In the event they are caught, the hauliers always pay the fines. However, the drivers’ records are continually tarnished by each and every offence.

The documentary also alleges that some drivers are being fined for changing planned routes – even if they are forced to do so by roadworks. One driver from Belarus, who claims he was working for Girteka, said that he was fined €100 by his employer for using a tolled-motorway due to a road closure.

The filmmakers say the practice was also confirmed by a former Girteka employee, who told them that the logistics giant charges drivers for additional kilometres made compared to their shortest route calculations. As the film’s presenter states, such deductions are illegal and thus not written on the drivers’ contracts.

In another testimony, a Russian driver is seen telling one of the film’s presenters how his employer had threatened him with a fine for insisting he take his mandatory legal rest. He even claims he was told he would walk home on foot if he dared to disobey his boss.

The trucker eventually drove on, but adds that he had been docked €150 of his wages by the time he got home.

Several drivers who spoke during film also explained that they always slept in the cabin, even when they were legally obliged to do otherwise.

Moreover, the documentary claimed it had been given access to a document from a haulier that advised its drivers on how to avoid being caught.

The document allegedly instructs drivers to never take 45-hour pauses near loading/unloading areas, and says that the curtains must always be drawn during such rests. In the event the drivers are caught, the document states they should say they are waiting for the company’s minibus. Should that fail and they be fined, the instructions are to write in their own language that they don’t know what they are being punished for.

One driver is quoted as saying “you draw the curtains, pull the chip out of the tachograph and hide from the police.”

In yet another shocking allegation, the film claims a Hoptrans employee had told them that the haulier had an agreement with a hotel chain allowing their drivers to present fake bookings to road transport inspectors.

Hoptrans denies it is guilty of such a practice. It said that it has an arrangement with a hotel chain to make bookings for drivers, but the truckers do not always take up the offer.

Some hauliers are also accused of providing cramped and dirty rooms to drivers with several bunk beds crammed in. The film features a clip of such a room allegedly shot by a Hegelmann driver from Uzbekistan.

In a secret recording, an employee of Kamida is seen aggressively telling drivers not to use the “hammer” symbol on the tachograph during loading and unloading.

Kamida claimed the clip “was taken out of context” and that the drivers were being told of how they had “marked other work too often”.

The next section of the film features testimonies of drivers who claimed they had been beaten after asking for due wages. Another driver even explained how he was left abandoned in Antwerp and needed to enlist the help of the Ukrainian consulate in order to get home.

In another serious allegation made against Girteka in the documentary, a Ukrainian driver claims he suffered a horrific ordeal at the hands of the well-known haulier.

While working in the Czech Republic, the man’s health allegedly deteriorated to the point he hadn’t been able to sleep for two or three days. The driver says he was sick while in the shower and slipped, causing him minor injuries. He was then taken to a hospital in Prague, where doctors told the tee-total driver he needed a kidney transplant.

Due to his health situation, the Ukrainian needed to get back to Lithuania for treatment. However, instead of finding a more direct means of transport, Girteka allegedly transported him in a lorry with a trainee driver. The journey is said to have taken 3 days.

If that weren’t bad enough, the driver states he wasn’t transferred his wages on time, funds which he needed to buy medicine. After enquiring about his insurance, the driver claims he was simply told by his employer that he would receive a payment of €1,500. He lost his job as a result of his health problems, and says Girteka still owe him €5,000.

When asked by the filmmakers whether they provide compensation for drivers, Girteka are quoted as saying that they provide insurance to drivers that covers health issues as well as the need to return to Lithuania.

Fines for arguments with superiors or not driving economically enough

Several testimonies from drivers shown in the film tell of how they had been fined for not driving economically enough. Again, the Lithuanian hauliers deny all the allegations.

Other drivers told of how they had been fined for arguing with their boss or publicly complaining about unpaid wages on social media.

One trucker even claims he was told he would have to resign in order to get the wages he was actually due, but had to keep working in order to provide for his family.

The allegations above only concern the first hour or so of the documentary. If true, the accusations show an alarmingly degree of the problems faced by some 3rd-country nationals working for Lithuanian haulage firms.

Among other things, the film goes on to accuse various different hauliers of stealing their employees’ residence cards, forcing drivers to sign bogus payslips, and tax evasion.

Although the documentary will likely sharpen some people’s negative perceptions of the Lithuanian haulage sector, it’s worth pointing out that the film also shows there is a lot of concern and anger about the alleged malpractices of some hauliers in the country.

The film was of course made in Lithuania, and features interviews with union leaders, accountants, industry representatives and politicians who are determined to put an end to the mistreatment of drivers.

One can only hope that the documentary sparks action in this area and that the wellbeing of the drivers will be improved substantially as a result.

It also important to highlight that the hauliers uniformly deny the claims made in the film. Therefore, as stressed earlier, it is up to you, the reader and viewer, to decide what you make of the documentary.