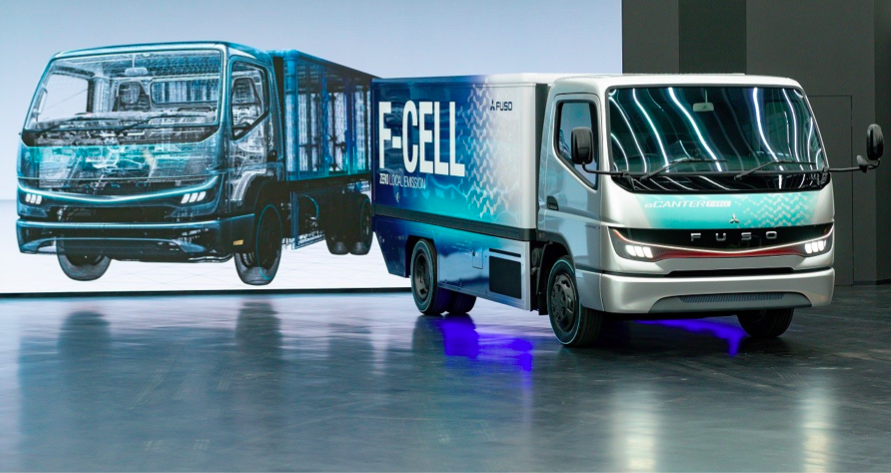 Mitsubishi Fuso Truck & Bus Corporation (MFTBC), Daimler’s subsidiary, has announced that it will start producing its hydrogen fuel cell trucks within the next decade. eCanter trucks are already operating in several European cities.

The manufacturer of eCanter trucks has announced that mass production of the vehicles will start in the late 2020s. This is part of Daimler’s strategy to achieve a CO2-neutral balance in the operation (tank-to-wheel) of new trucks and buses in Europe, Japan and the NAFTA (North American Free Trade Agreement covering the USA, Canada and Mexico) by 2039.

According to MFTBC, which wants to comply with the provisions of the Paris Climate Agreement, CO2-neutral transport will only be carried out using electric vehicles powered by batteries or hydrogen. Electric models will therefore be introduced in all vehicle segments offered by the manufacturer.

At the Tokyo Motor Show in 2019, MFTBC presented the Vision F-CELL, a lightweight fuel cell truck. The vehicle uses high-pressure, high energy hydrogen, allowing it to travel up to 300 km and drastically reduces refueling time to less than 10 minutes.

Fuso F-Cell is a new version of eCanter, which has been in serial production since 2017. It is a battery-powered, plug-in electric truck with a GVW of 7.5 t. Its range on one charge is about 100 km. The vehicle is equipped with an engine with a maximum power of 129 kW and a maximum torque of 390 Nm and six high-voltage lithium-ion batteries (20 V and 13.8 kWh each). Full vehicle charging with a quick-charging station takes about an hour and a half.

Since March this year, two electric FUSO eCanter trucks have been used by An Post in Dublin. Thus An Post became the first postal service provider in the world to achieve zero carbon emissions in the capital.