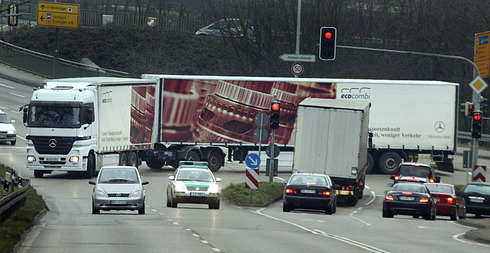 XPO Logistics will carry out transport by mega trucks in Portugal. The new service, which will be available exclusively to Sociedade Central de Cervejas, is part of XPO’s strategy to increase the use of extended trucks.

XPO Logistics announced last week the launch of a new service in Portugal, after approval by the Portuguese Institute of Mobility and Transport. However, the operator will only carry out transport by 25-meter trucks for the beverage and beer producer Sociedade Central de Cervejas, from the factory in Vialonga and its bottling centre Luso, Vacariça, to customers located near Porto, Azambuja and Algarve.

XPO Logistics plans to increase the number of such routes on the Iberian Peninsula. In Spain, the company has a fleet of 15 mega trucks. The operator was one of the first companies to be authorised for this type of transport in Spain (in 2016).

Portuguese mega trucks are 25.25 m long and have a maximum capacity of 60 tonnes. According to the company’s statement, the use of such vehicles reduces CO2 emissions by 20% thanks to greater efficiency, loading capacity and, consequently, fuel savings.

Following the successful launch of our mega trucks in Spain, we can now also help our customers in Portugal to achieve their environmental targets with the same efficiency,” said Massimo Marsili, General Manager of Transport at XPO Logistics in Spain, Portugal and Morocco.

According to Marsili, the company is determined to “continue to invest in innovative solutions to reduce the carbon footprint of its transport operations.”

Up to now, in addition to Portugal, extended vehicles have been put into service by countries such as Spain, Belgium, Denmark, Sweden, Finland, the Netherlands and some federal states in Germany. In May this year, the association of truck manufacturers ACEA, in connection with the strict CO2 limits imposed by Brussels, called for the introduction of 32-metre vehicles in Europe.