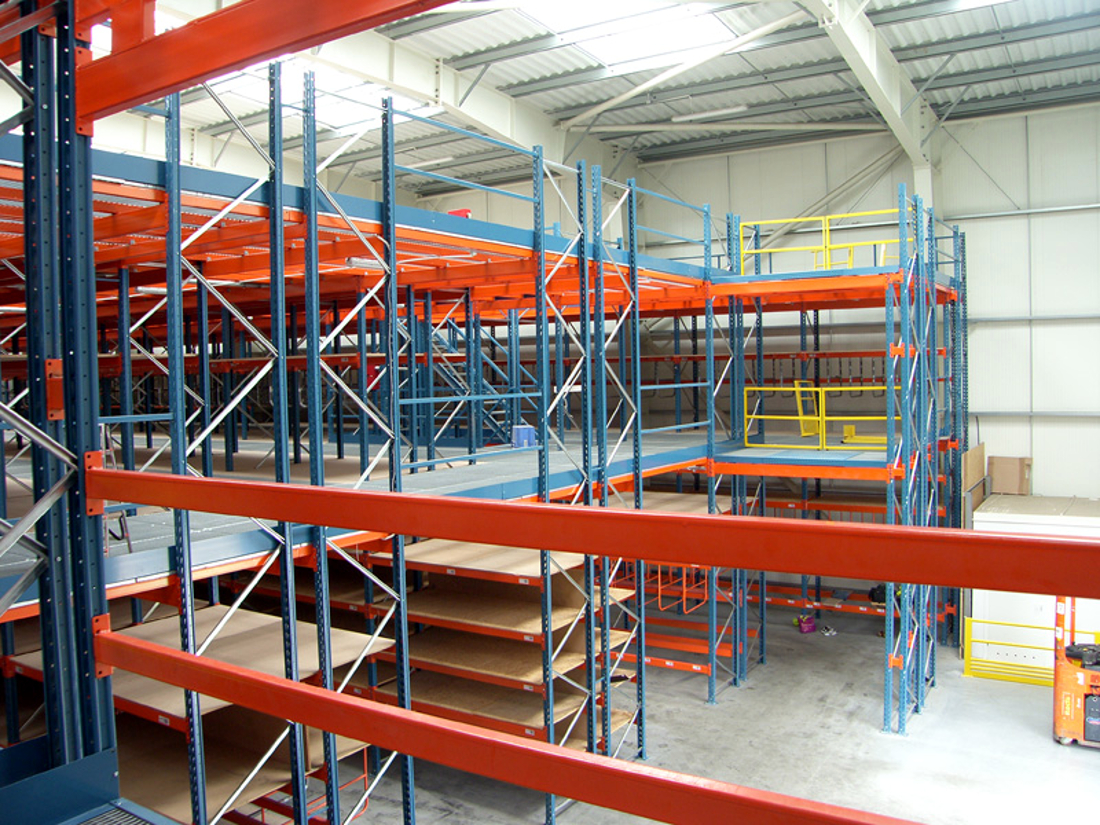 Located in Warsaw, the KRM distribution centre serves the European chain of ECCO footwear stores. In total, KRM distributes to a chain of 300 stores in 21 countries and, more recently, serves an e-commerce channel covering 17 countries. The warehouse with an area of 9,000 sqm has 17,000 pallet spaces. Solutions in the spirit of logistics 4.0 have been implemented together with WDX experts.

The key elements of the warehouse are:

– dedicated parcel lifts enabling the migration of articles from the upper floors of the mezzanine to level 0,

– and an automatic conveyor transport system.

The three-level work platform has replaced typical pallet racks. It has two staircases and six loading gates. The platform has provided the user with an increase of more than one third in the number of pallet spaces in the same area, with the possibility of adding intermediate levels (shelves). This allows picking from any level of storage.

As a result, the picking of goods is much faster. According to the company’s calculations, the new storage system increased the efficiency of picking processes by 80%. This reduced the work of the forklift truck, which had to pick pallets in order for the employee to complete a single index. Now each unit is immediately accessible.

The third level of the platform is at a height of 7.4 m and the clearance between the levels is 2.2 m. On the third level, there is an undeveloped area with the possibility of adding shelving racks later on, which will further increase the number of available locations. Goods are picked up automatically, by means of the parcel lift and by means of a conveyor system driven by electric rollers. The lift carries out the transport of parcels from three levels to level 0. On each level of the platform, there is a conveyor equipped with three buffer zones.

Since the warehouse is growing rapidly and the storage process needs to be improved, the KRM uses a mezzanine to make better use of the available space. It occupies an area of approx. 1,300 sqm and the user has more than 2,000 pallet spaces at his disposal.

5 million pairs of shoes in the automated warehouse

The distribution centre of another footwear giant, CCC, had already undergone a similar revolution a few years ago. The sales network of the CCC Group includes over 700 outlets, mostly in Poland, but also in the Czech Republic, Slovakia, Latvia, Russia, Romania, Ukraine and Hungary.

In the Legnica Special Economic Zone in Polkowice, a fully automated (previously the distribution centre was semi-automatic) high bay warehouse of the miniload type was opened. It has an area of over 23,000 sqm and is the largest facility of this type in Central and Eastern Europe. The warehouse can store about 5 million pairs of shoes. The TGW solution includes an integrated warehouse management system CI_LOG 5.0, compatible with the existing ERP system. It also includes automatic quality control.

The main objective was that the storage and handling of individual boxes from receipt to dispatch should be carried out with minimal human intervention.

Cardboard boxes are unloaded from the container, identified and checked. The stacker cranes have special grippers (for direct handling of cardboard boxes). The elimination of pallets from the system allowed the repackaging process to be eliminated.

Two independent conveyor lines operate in the loading and unloading area. One is used to supply the warehouse, the other to dispatch cardboard boxes from the warehouse.

Automation minimizes the risk of errors

Cardboard boxes are stored in a fully automated warehouse. This reduces both the time and distance an employee would have to travel and minimizes the risk of product-human interface errors. The warehouse also provides picking, sorting and shipping. The handling capacity is approx. 60,000 cardboard boxes a day.

Reception and dispatch areas use telescopic and belt conveyors to unload cardboard boxes from containers and ensure smooth loading. Automatic connection to the existing sorter eliminates the possibility of human error.