The truck queues leading to the Port of Dover continue to hit the A20, causing repeated deployments of Operation TAP, a measure used to manage traffic flows into the port and protect local roads from congestion by freight traffic. After being implemented again today, Operation TAP has been used 20 times in just 33 days. As noted by Sky News, this compares to 69 times in total during 2021, almost half of which occurred in the last two months of the year. 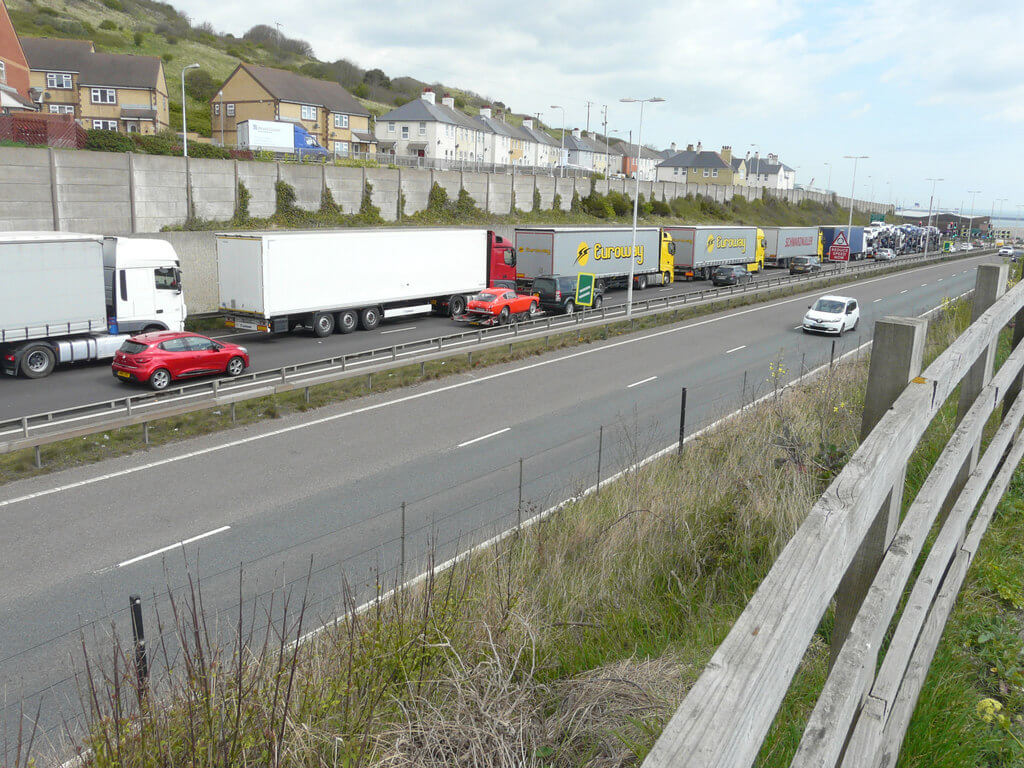 Although the use of Operation TAP pre-dates Brexit, as it was devised back in 2015, its usage has substantially increased in recent times. According to unofficial figures seen by Sky News, Operation TAP was used a maximum of nine times in January between 2016 and 2019 – half as much as this year. In 2019, it was only used on 3 occasions.

The most recent use of the measure was confirmed by Kent Highways this morning around 6.20am. Operation TAP was also deployed yesterday at roughly the same time.

Dover Tap has been implemented on the A20: https://t.co/xGiLYVGUAf pic.twitter.com/kyTOoW9QKc

Describing the deployment on its traffic information website, Kent Council wrote: “The Dover Traffic Access Protocol (TAP) scheme on the A20 at Aycliffe has been implemented due to heavy freight volumes. This is to prevent port-bound traffic from disrupting the local road network and the A20 through Dover town.”

The factors influencing the congestion on the A20 leading to Dover Port are said to be many, including checks required as a result of Brexit, covid-related staff absences at the port, and a drop in ferry sailings due to a vessel being out of service.

Moreover, William Bain, head of trade policy at the British Chambers of Commerce, told the Guardian yesterday that further issues have been caused by French customs officials requesting a wet signature on border documents for shipments of animal and plant products from the UK.

“It is the latest in a string of issues with the trade deal that speaks to the wider problems of interpretation, inconsistent application and glaring gaps in its coverage,” Bain is quoted as saying.

Rod McKenzie, Executive Director of Policy and Public Affairs at the RHA, also spoke about the matter to Sky News. He said:

“It’s clear there are teething problems with the new border systems that came in. The test will be if these queues and other issues subside as traders get used to the red tape. If they continue for much longer it suggests the problems may be more serious than just teething trouble.”

Last week, a Logistics UK spokesperson told the BBC “The queues we are seeing now result from the implementation of UK import requirements combined with volumes that are now picking up.” The Logistics association representative added: “a small percentage of vehicles arriving at the border have incorrect documentation [and] when volumes of traffic are high, this results in queues”.

Highways England says Dover TAP traffic management system was activated 69 times in 2021: only 4 times in the first 4 months, 19 times in the next 4 months, and 46 times in the last 4 months. After 1 month & 1 day this year, it’s been 18 times. Sharp uptick since November ’21. https://t.co/ZduRoMzNY4

The queues have sparked calls from local councillors, many of whom represent the Brexit-supporting Conservative party. Last week, Tory councillor Nigel Collor told Kent Online that lorry queues were making it “extremely difficult” for residents to access nearby retail facilities. He added that he wants a “solution” to be found before increased border checks begin this summer.

“Just recently TAP has been on nearly everyday. I get emails saying, 'It’s on again today, why?’ I had one email from a resident in Whitfield who was stuck on Jubilee Way for one-hour-and-20 minutes back in December. He was going to St James’ to do some shopping. It’s a concern for local people and it deters people from elsewhere; Capel, Whitfield and Deal coming in to Dover to shop. It is detrimental to our businesses,” Collor told Kent Online.