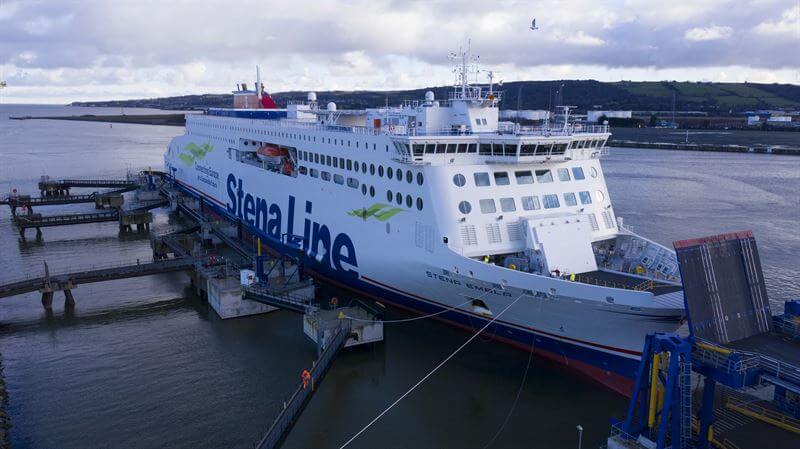 Stena Line has temporarily moved its newest vessel away from its Belfast-Liverpool route in order to deal with soaring demand from Irish hauliers for direct sailings to France.

The ferry operator announced yesterday that the Stena Embla, which has only just entered service, will operate on the Rosslare-Cherbourg route for the time being.

@byrne_padraig @rorycassidy01 Hi. The Stena Embla will be temporarily operating on Rosslare to Cherbourg, versa route, while the Stena Horizon will be in dry dock for essential maintenance. ^Ada

Clearly Brexit has created an increase in the demand for direct freight routes, and in particular driver accompanied freight, so the addition of Stena Embla, whilst temporary, plus the recently introduced Stena Foreteller to the route will provide a welcome addition for our customers at this time”, commented Paul Grant, Stena Line’s Irish Sea Trade Director on the change.

The Stena Embla has the capacity to carry 3,100 freight lane meters. It will increase freight capacity by 20% on the Rosslare-Cherbourg route and provide 60% more cabins for freight drivers.  The Stena Embla is the third E-Flexer ferry to be commissioned for Stena Line’s Irish Sea routes in the last 12 months.

The vessel will make three weekly return trips between Rosslare and Cherbourg, which alongside the Stena Foreteller will see Stena Line operate 12 crossing per week between Ireland and the Continent.

The move from Stena comes after Irish hauliers called on the country’s Department for Transport to increase capacity on routes between Ireland and France.