Trucks are now flowing into Dover “at near normal levels”. So where are the queues? 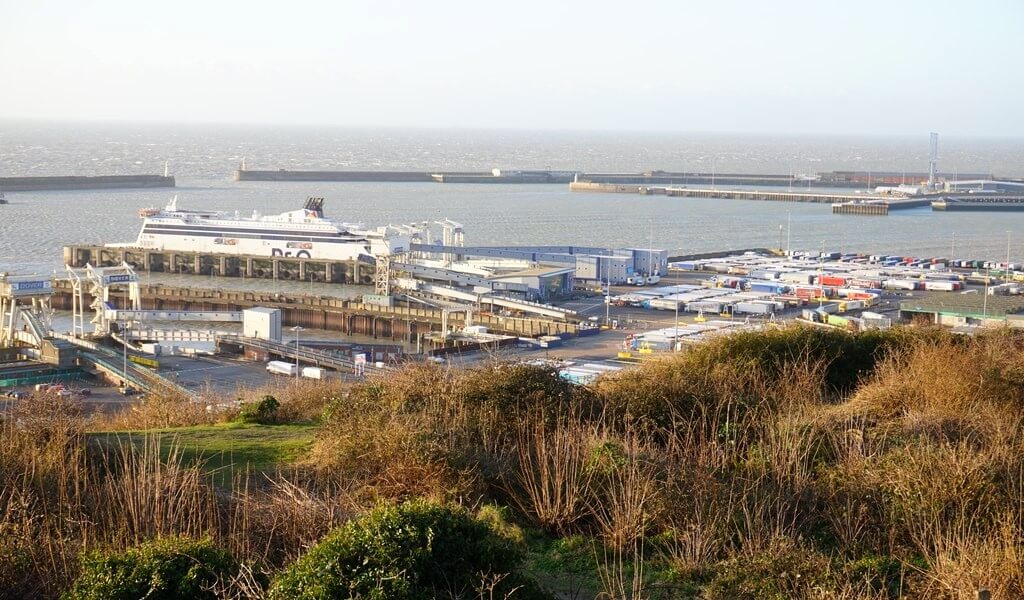 Transport Secretary Grant Shapps has told the UK Parliament’s transport committee that significant disruption at Dover has failed to materialise despite the amount trucks currently flowing through the port being “at near normal levels”.

Shapps said that there are now almost 6,000 trucks moving through the port everyday, which is close to the 7,000 that normally go through Dover at this time of year:

You will have heard talk, including worst case scenario projections and mentioned many times in newspapers of queues of 20, 30, 40 miles, none of which we saw as a result of the end of the transition period. In terms of flow, I can tell you that the latest information is there are nearly 6,000 lorries a day, which is about 1,000 under where you might expect it to be at this time of year.

So why are there no queues? And if there is no congestion, why is work still continuing on a number of Brexit lorry parks?

The main reason for this appears to be simple: a lack of customs checks. Comments made by HRMC chief Jim Harra last month made it clear that checks are far from being fully conducted. In some cases, trucks are simply being waved through.

Harra told a House of Commons select committee on Thursday 21st January that the UK Government had given HMRC instructions to “prioritise flow over compliance”:

The government did make it clear that when it came to goods movements into the UK, we would prioritise flow over revenue protection, and that is reflected in the procedures that we have put in place. That does mean that we are running some compliance risks as a result. We do expect that there will be some increased non-compliance, particularly in the first financial year, as a result of the easements that we have introduced.

Harra also cited a study from the Office of Budget Responsibility, which estimates that this strategy will see the UK lose £800m in customs duty and VAT in 2021.

Therefore, in order to plug this revenue gap, more customs checks will have to be introduced eventually. Presumably this is why the lorry parks remain part of the UK Government’s plans.

Some of those checks are already scheduled to begin in June, which could yet result in the kind of disruption many observers anticipated would be the case in mid-January of this year.

Another issue worth looking at here is the phenomenon of so-called “invisible queues”, which Rod McKenzie of the Road Haulage Association referred to last month. McKenzie explained to LBC radio what he meant by the term:

What we might get instead of visible queues like we had before Christmas is invisible queues. And what I mean by that is if you haven’t done your paperwork, if your driver hasn’t had his COVID test, you will not be able to leave. The lorry will not leave the Depo or the loading center or wherever it’s got to go from. And of course, those are queues you can’t see. But they do affect the supply chain because it means the lorry isn’t moving. And that’s one of the big unknowns that we’re facing. So not so much queues around Dover, but more queues elsewhere back at depo.

In an exclusive interview published today on our website, Shippeo’s Central European CEO explained that invisible queues are indeed a thing, though they are not exclusively a result of Brexit.

Meanwhile, despite the number of trucks coming into Dover rising significantly in recent weeks, it is still 14% less than last year. This is likely down to a multitude of factors, including reduced trade and a lack of willingness among some hauliers to go to the UK.

Another reason could be a rise in unaccompanied freight, the evidence of which is becoming clearer every day.

Interestingly, this change was observed by the Commercial Director of Peel Ports well before the new variants of coronavirus were discovered.

Back in November, Stephen Carr said that fear of congestion at Dover, combined with Covid-19 and a driver shortage, had resulted in cargo owners and carriers opting to switch transport modes and use different ports and shipping methods to preserve supply chains.

When asked if Brexit would spark a move towards containerised freight, the Peel Ports Director said it was “already happening”:

It’s already happening. COVID’s had an impact on the availability of haulage and hauliers on long-distance routes, particularly on the cargo that comes out of Iberia into the UK – not just to our (Peel Ports’) ports on the UK west coast, but equally on the east coast as well – and this has given rise to  a number of new services, which are longer-distance sea routes and shorter-distance road routes.

Earlier this week, Brittany Ferries released new figures backing up the trend, which is further evidenced by DFDS’ decision to operate an additional ferry dedicated to unaccompanied freight between Cuxhaven and Immingham.

It is also worth mentioning that the flow of trucks through Dover in the other direction has not been as smooth. Customs checks in Ireland, Northern Ireland and France have slowed freight traffic in particular. As a consequence, a significant percentage of trucks are leaving the UK empty to avoid checks.