The UK Government has officially confirmed a temporary visa scheme for 5,000 foreign lorry drivers. The move, which represents a major u-turn, aims to provide a last-ditch means of avoiding an escalation of the country's supply chain crisis before Christmas. On top of the visa scheme, the government has also announced more funding for training and sent a desperate-looking letter pleading for ex-HGV drivers to return to their former profession. 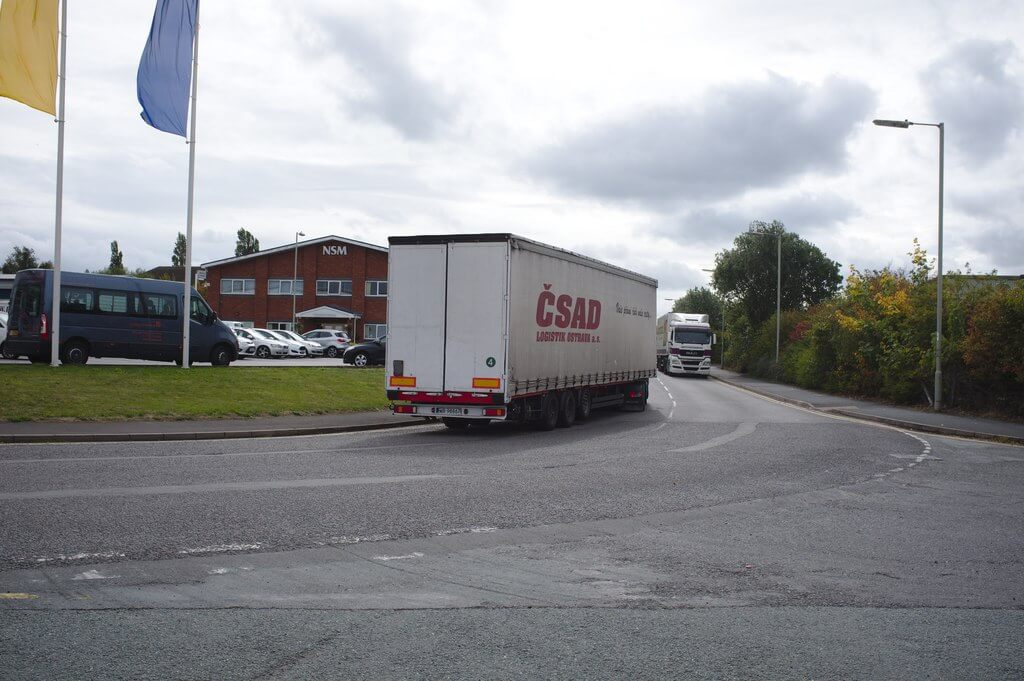 According to the UK Government’s press release, 5,000 foreign HGV drivers will be permitted to work in the UK for 3 months up until Christmas Eve, “providing short-term relief for the haulage industry”.

The UK Government states that UK Visas and Immigration (UKVI) are preparing to process the required visa applications that are made “in a timely manner”.

Besides launching the aforementioned visa scheme, the government will also provide funding for both medical and HGV licences to any adult who completes an HGV driving qualification accessed via the Adult Education Budget in the 2021/22 academic year. The change will be backdated and applies to anyone who started one of these qualifications on or after August 1st 2021.

Presumably keen to downplay its u-turn on visas, the UK Government chose not to include the word visa in the title of its statement on the actual visa scheme. Instead, it reads “More support to help people to become HGV drivers among package of government measures to ease risk of shortages.”

Keen to emphasise that its position had not changed, the UK Government said in its statement that visas are not a long term solution:

“However, we want to see employers make long term investments in the UK domestic workforce instead of relying on labour to build a high-wage, high-skill economy. Visas will not be the long term solution, and reform within the industry is vital. That’s why the government continues to support the industry in solving this issue in the long term through improved testing and hiring, with better pay, working conditions and diversity.”

“This package of measures builds on the important work we have already done to ease this global crisis in the UK, and this government continues to do everything we can to help the haulage and food industries contend with the HGV driver shortage. We are acting now but the industries must also play their part with working conditions continuing to improve and the deserved salary increases continuing to be maintained in order for companies to retain new drivers. After a very difficult 18 months, I know how important this Christmas is for all of us and that’s why we’re taking these steps at the earliest opportunity to ensure preparations remain on track.”

It is hoped that the visa scheme will provide a short, sharp increase to the HGV driver workforce that can help to relieve the pre-Christmas peak on British supply chains. Nevertheless, there are some doubts as to whether European truckers will be attracted by the opportunity of 2-3 months of temporary work in the UK.

Robert Hollyman, Director of Youngs Transportation and Logistics, told Channel 4 news earlier this week that it had had enquiries about vacancies from EU nationals who used to work for the company. However, Marco Digioia, the General Secretary of UETR, thinks most EU drivers will not return. He told inews:

“I expect many drivers will not return to the UK even if the UK Government allows them to. While offering visas to drivers on the continent would be a welcome step, there are many other issues, such as working conditions, pay, and the costs of getting into and working in the UK.”

The visa scheme will of course be open to truckers from across the world, so drivers could potentially brought in from countries further afield than Central Europe. The exact details of the scheme have nonetheless not yet been published, and it remains to be seen which countries hauliers will try to recruit from.

Besides the funding for training and the visa scheme, the government is also bringing in legislation to allow delegated driving examiners at the three emergency services and the MOD to be able to conduct driving tests for one another. This, it is said, will give the emergency services greater flexibility and help increase the number of tests DVSA examiners can provide HGV examiners.

The package of measures, especially the visa scheme, has been welcomed by industry figures.

In a quote accompanying the UK Government’s press release, Ian Wright, Chief Executive of the Food and Drink Federation, said:

“We welcome the government’s pragmatic decision to temporarily add HGV drivers and poultry workers to the existing visa scheme. This is something UK food and drink manufacturers have asked for over the last few months – including in industry’s Grant Thornton report – to alleviate some of the pressure labour shortages have placed on the food supply chain. This is a start but we need the government to continue to collaborate with industry and seek additional long term solutions.”

Elizabeth de Jong, Logistics UK’s Director of Policy, was also quoted in the press release. She had the following to say:

“Logistics UK welcomes the government package of measures aimed at improving the ongoing driver crisis. The government’s decision to grant 5,000 temporary visas for HGV drivers to help in the short term is a huge step forward; we are so pleased the government has listened to our calls and has made this bold decision to support the UK economy. We are also delighted that DfT have agreed to jointly send nearly 1 million letters to all drivers who currently hold an HGV driving licence. With fantastic HGV driving opportunities available in the logistics industry, now is the perfect time to consider returning to the occupation.”

Rod McKenzie, the RHA’s Managing Director of Policy & Public Affairs, is another industry figure who has reacted to the news. Writing on Twitter, he said the launch of the visa scheme represented a “major win” for the organisation:

If this 👇turns out to be true it’s a major win for ⁦@RHANews⁩ in our long campaign on #lorrydriver shortage: But temp visas won’t solve it – much more needs to be done on training, apprenticeships, testing and welfare facilities for truckers https://t.co/aQhch3ifKB

Meanwhile, the UK Government has attempted to encourage former HGV drivers to return to the profession in a rather desperate-looking letter.

Many qualified truckers in the UK have left the profession due to poor pay and conditions, a lack of respect for truck drivers and the huge shortcomings the country has with HGV driver facilities.

In an attempt to woo ex-truckers back into the profession, the letter claims that there are “fantastic HGV driving opportunities in the logistics industry” and adds that “conditions of employment and pay have been improving across the sector.”

Many drivers themselves would dispute these claims. Although it is true that pay has increased in recent months, not all truck drivers have benefited, and poor rates for some vacant HGV driver positions are still being advertised on job search websites. On top of that, there have been very few signs of progress with facilities.

Therefore, it would appear that those who have changed their career in recent years will need a lot of convincing in order to get behind the wheel of a truck again. 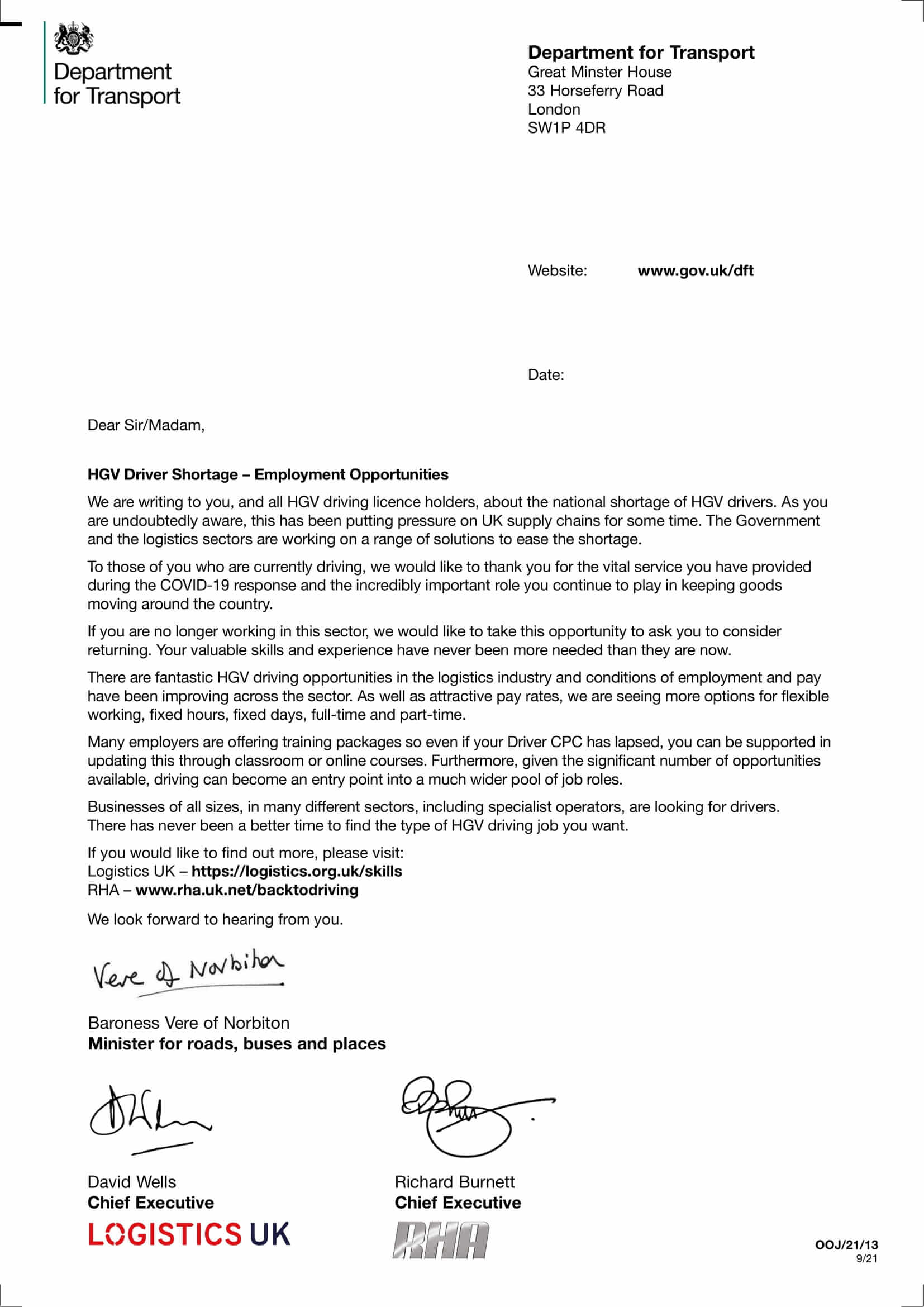