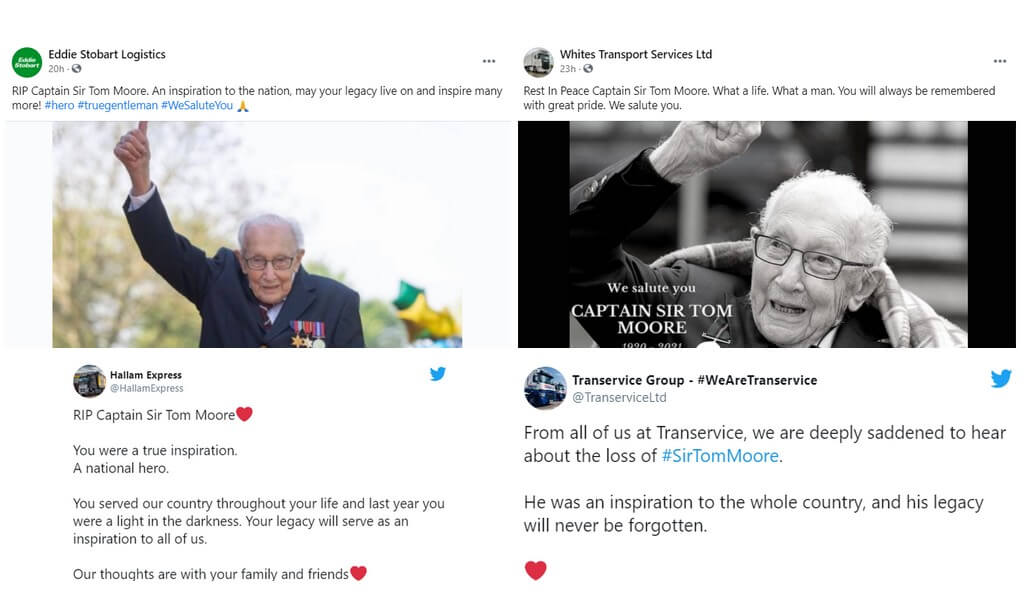 Sir Tom Moore served during World War 2 and became a household name last year thanks to his fundraising efforts.

The veteran had originally planned to raise £1,000 for NHS charities by walking 25m circuits in his garden. However, he ended up raising £33 million from over 1.5 million supporters.

Since the sad news of Sir Tom’s death, which was result of his battle with pneumonia and coronavirus, tributes from the UK haulage industry have been pouring in.

Eddie Stobart Logistics said that Captain Tom was “an inspiration to the nation”:

Templar European Logistics said it would be naming one of its new trucks after Sir Tom once its new fleet arrives.

Volvo Trucks UK said that the British Army veteran was a “true hero”.

Captain Sir Tom Moore was a true hero for our country – inspiring so many, ourselves included, to raise money for NHS Charities Together. 💙

Our thoughts are with his family and friends.
Rest in peace Captain.https://t.co/SINRRj181S

Hallam Express echoed those sentiments, and described Sir Tom as a “light in the darkness” of 2020.

You were a true inspiration.
A national hero.

You served our country throughout your life and last year you were a light in the darkness. Your legacy will serve as an inspiration to all of us.

Our thoughts are with your family and friends❤️

Transervice were another company to pay their respects, stating that Sir Tom and his legacy “will never be forgotten.”

From all of us at Transervice, we are deeply saddened to hear about the loss of #SirTomMoore.

He was an inspiration to the whole country, and his legacy will never be forgotten.

A nationwide public clap is planned for 6pm tonight to pay further tribute to Captain Sir Tom Moore and other fundraisers.