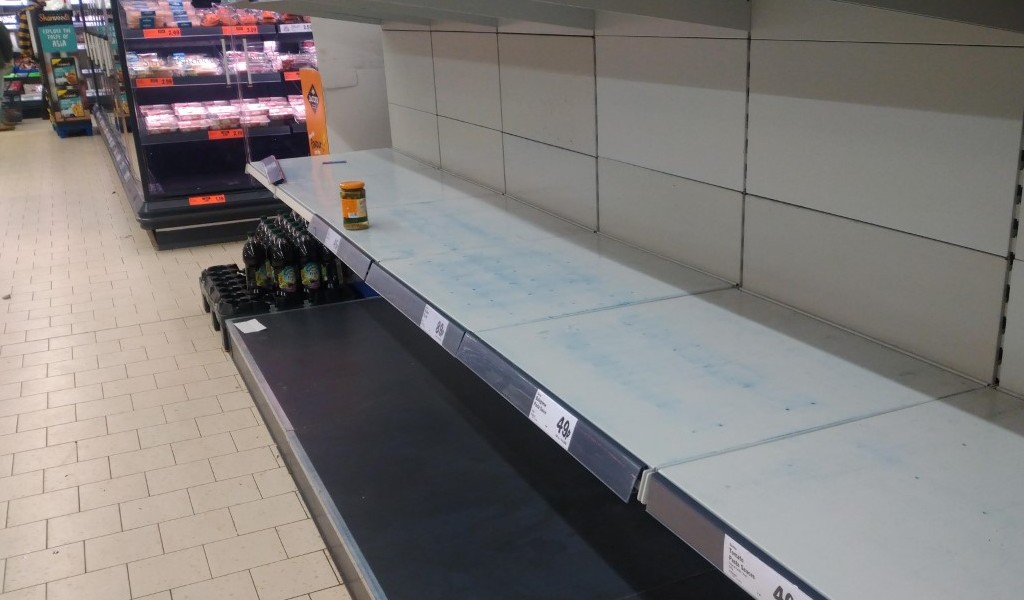 Just as many industry figures had predicted, the UK’s driver shortage has disrupted the country’s supply chains to a visible extent. Petrol station BP had to temporarily close a “handful” of its petrol stations partly due to the issue, while reports of empty supermarket shelves in the UK are also growing. To add to the problems, the so called ‘pingdemic’ is putting key workers into self-isolation, while further challenges lie ahead in the shape of extra post-Brexit customs checks.

In a statement widely referred to in the UK media yesterday, BP said the petrol stations that it had closed were able to open again within a day.

The oil company added that that the closures were partly caused by driver shortages as well as the need for some of its staff at its fuel distribution terminal to self-isolate due to coronavirus:

Our supply chain has been impacted by the industry-wide driver shortages across the UK, and was exacerbated by the temporary closure of our Hemel Hempstead fuel distribution terminal last week because of necessary Covid-19 isolations amongst staff. The terminal is now operating as normal once again.

The closure comes less than 24 hours after the UK Government announced its plans to speed up HGV driving tests in order to deal with the driver shortage. However, industry organisations like the Road Haulage Association (RHA) and Logistics UK don’t believe the government’s plans will bear fruit until next year at the earliest.

The RHA says it is continuing to call for measures to make it easier for companies to employ foreign drivers in the UK on a temporary basis. Moreover, the organisation has warned that the ‘pingdemic’ will force some of the UK’s stretched workforce of lorry drivers into self-isolation, exacerbating the driver shortage issue even more.

The ‘pingdemic’ refers to the situation whereby people are instructed to self-isolate via a ‘ping’ notification from the UK’s NHS Test and Trace app. All employees, whether they are HGV drivers or other essential workers, must self isolate according to the rules. Now that England has fully opened up, the fear is that the number of coronavirus cases is set to skyrocket, causing large numbers of staff in all industries to self isolate at home.

There is already evidence that this problem, along with existing driver shortage, is having an affect. Numerous councils across the UK have had to limit the amount of bin collections they carry out due to a lack of drivers. Some did so long before the ‘pingdemic’ became a serious factor, while others have recently announced that collections will be less frequent.

ITV News reports that in the south alone, waste collections have been disrupted in Tonbridge & Malling, Southampton, Havant, South Oxfordshire, Vale of White Horse and Arun. There have also been similar issues in Wales.

Evidence of the aforementioned problems hitting supply chains has also been visible in a number of UK supermarkets, where empty shelves are being increasingly reported by concerned shoppers.

Sainsbury’s, Tesco and Lidl have all recently had to explain the reasons for the empty shelves at some of their branches, which have generally been blamed on the shortage of HGV drivers, Brexit and the pandemic.

However, despite all of the above contributing to the supermarket supply chain problem, the front pages of the UK’s press today suggest that the ‘pingdemic’ is almost entirely to blame: 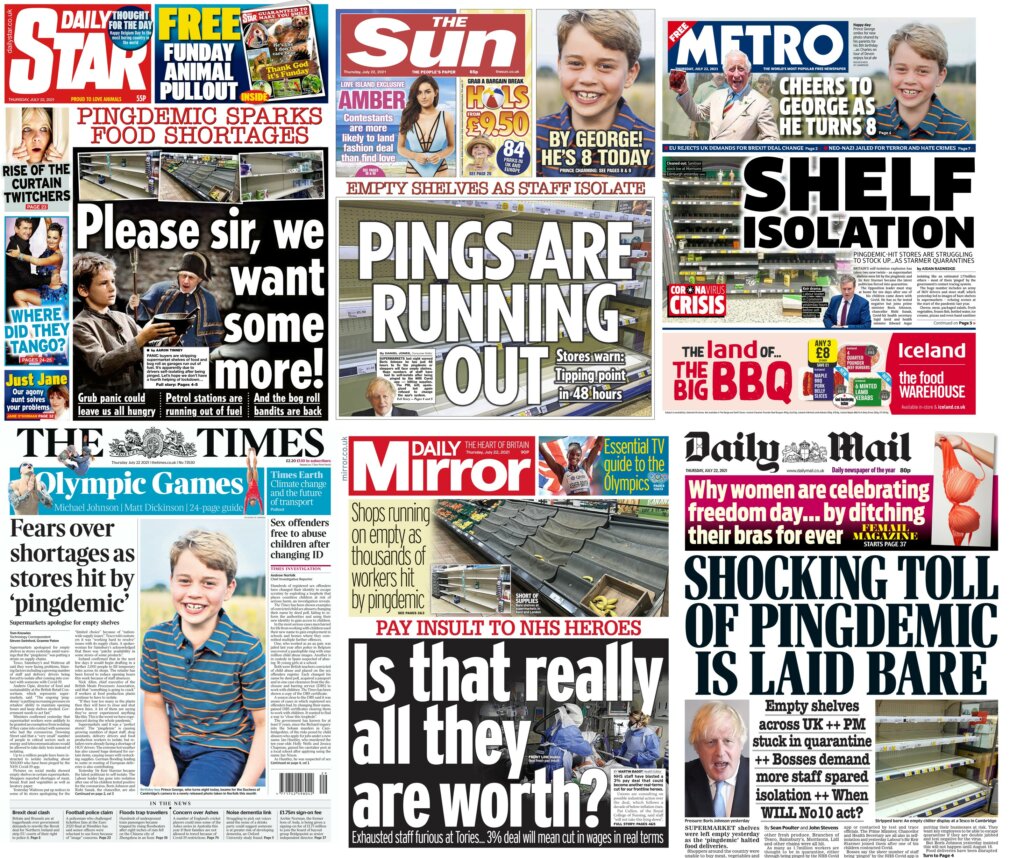 That said, there is no doubt the ‘pingdemic’ has already caused a severe headache for some supermarkets. Iceland, for instance, had to close some of its stores after 1,000 of its staff were forced to self-isolate.

Lidl has had its problems too, and has arguably been one of the supermarkets worst affected by the driver shortage. According to a report published by the Grocer, hauliers are now prioritising deliveries to other clients due to the supermarket chain’s lack of flexibility when it comes to delivery times.

Amid concerns that supermarket supply chains could worsen, shoppers have been urged not to panic buy. Nevertheless, if people fail to heed that call, some supermarkets may have to decide to introduce limits on essential items again.

In order to alleviate issues caused by the driver shortage, the UK Government recently introduced a temporary relaxation of drivers' hours rules. Nevertheless, as we have seen, it hasn’t prevented the sight of empty shelves at supermarkets. The relaxation, which has been widely criticised by drivers as well as the RHA and Logistics UK, is due to end on August 8th. It would not be a shock if the government decided to extend it should supply chain disruption continue.

Meanwhile, lorry drivers themselves have become even more frustrated by the failure of many media outlets to highlight some of the key factors they believe have caused the shortage.

Numerous truckers on social media have done videos and blogs covering the issue, highlighting the lack of facilities, cost of training, poor pay and conditions, as well as the way their work is constantly monitored and scrutinised, as just some of the reasons for the lack of HGV drivers in the UK and other countries in Europe.

Recent job advertisements do show that HGV driver pay is on the rise. However, that alone may not be enough to tempt those with a HGV driving licence back into the profession – especially if the general experience of the job remains the same.

The lack of HGV drivers  isn’t the only labour shortage hitting the UK supply chains either. The British Meat Processors Association (BMPA) warns that labour shortages in its sector could even see production shut down. In a statement released on Wednesday, Nick Allen, CEO of the BMPA, followed the RHA in calling for more workers to be added to the UK’s Shortage Occupation List:

If the UK workforce situation deteriorates further, companies will be forced to start shutting down production lines all together. So, it’s for this reason that we’ve been calling on the Government for months to add butchers to the Shortage Occupation List, which would allow the industry to temporarily fill these growing vacancies with overseas workers until the current crisis has passed.

To top things off, further supply chain challenges facing the UK include the situation in Northern Ireland and additional post-Brexit customs checks due to be implemented in October and January.

As regards the former, the British Retail Consortium (BRC) recently warned that if no changes are made to the Northern Ireland protocol, “The challenges this will create in sourcing could force many retailers to move supply chains from GB to the EU.” To stop that happening, the UK says it is wants a ‘standstill period' to negotiate the changes to the protocol, which is part of the agreement that Prime Minister Boris Johnson referred to as “fantastic” in December.

When it comes to the latter, HMRC has written to 160,000 businesses in order to explain the measures they must take to ensure they can continue trading with the EU after the customs checks begin.

However, as The Times reports, concern is growing among shippers that EU-based suppliers have misinterpreted the government’s deferral of post-Brexit customs checks as the UK adopting a relaxed approach. It thus remains to be seen to what extent the checks will cause further disruption, or if the UK shall decide to go for yet another delay in order to protect supply chains.

No matter what happens, few will doubt that 2021 shall be looked back on as another challenging year for the UK’s logistics sector.

Photo credit: Stinglehammer, CC BY-SA 4.0, via Wikimedia Commons (note – image was taken in 2020 and is being used for illustrative purposes only)