Will Brussels solve the eternal problem of truck drivers? The European Commission already has a concrete action plan and money. 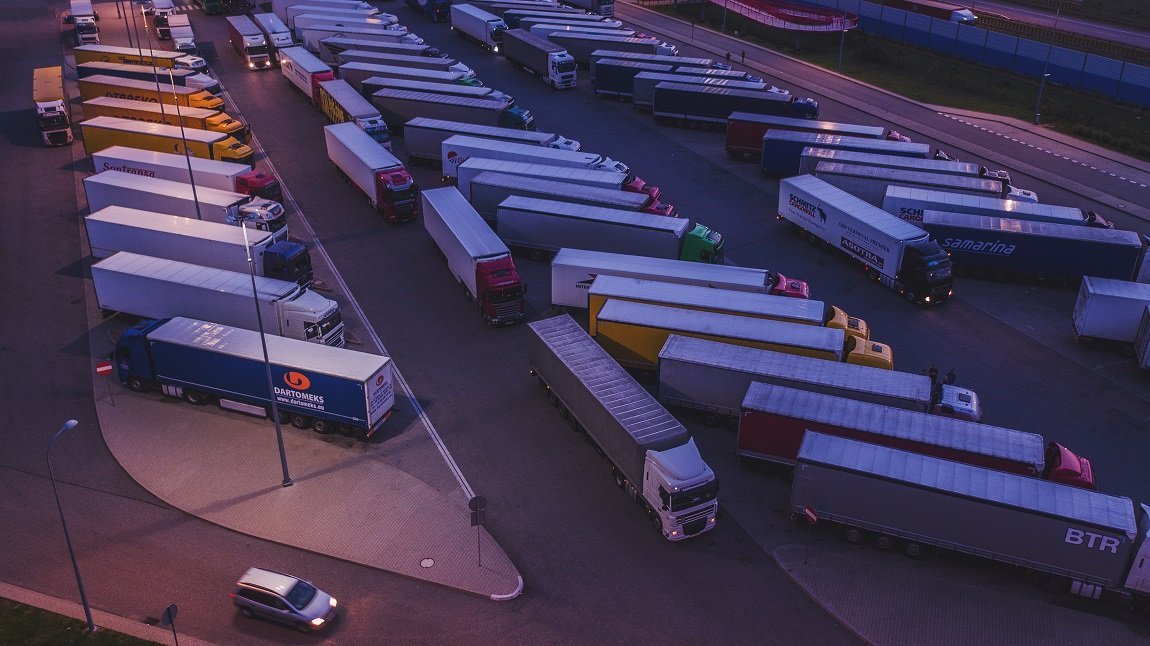 The European Commission has spent one year investigating parking infrastructure in the EU. It turned out that as many as 100,000 safe parking places for trucks are lacking in the Community. This is a huge problem for carriers, drivers and shippers alike. Brussels is already preparing a plan to solve it.

According to the international road transport unit IRU, annual losses due to cargo theft in Europe amount to 6-7 billion euros. 75% of such incidents occur in unguarded parking lots. IRU has been working for the past year with the European Commission on a study to investigate the condition of parking infrastructure and to define common standards for safe parking areas for trucks in the European Union.

Last week, the European Commission presented a report which shows that the Community lacks as many as 100,000 parking places for trucks. Based on the demand for road transport, freight flows and the application of the current rules on driving and rest times, it is estimated that the total demand for parking spaces in the EU is 400,000. However, there are only about 300,000 safe parking places for trucks available.

Such a large shortfall is a serious problem both for the driver, who is concerned about his safety, and for the carrier and shippers, who are exposed to financial losses. In addition, it is absolutely essential to provide safe places for trucks so that drivers can comply with the provisions of EU Regulation (EC) No 561/2006 on driving time.

Finally, the European Commission recognised the problem of the lack of adequate infrastructure for truck drivers and launched a study at the end of December 2017, which resulted in the above-mentioned report. The study aimed at creating coherent EU safety standards for parking lots and supporting the development of infrastructure. Experts also had to check where such places for trucks are the most needed.

However, the report is not all. The European Commission plans to allocate considerable resources to the expansion and improvement of parking lot safety. A total of €178 million will go to companies that decide to create safe parking areas for trucks based on uniform European standards.

Map of shortages and needs

It was crucial for the authors of the report to determine where the truck parking lots are needed the most. To this end, they analysed cross-border and long-distance transport flows within the Trans-European Transport Network (TEN-T), the demand for parking lots, where they are already located, and statistics on the theft of goods.

Here are the nine TEN-T corridors that are essential for long-distance freight transport: 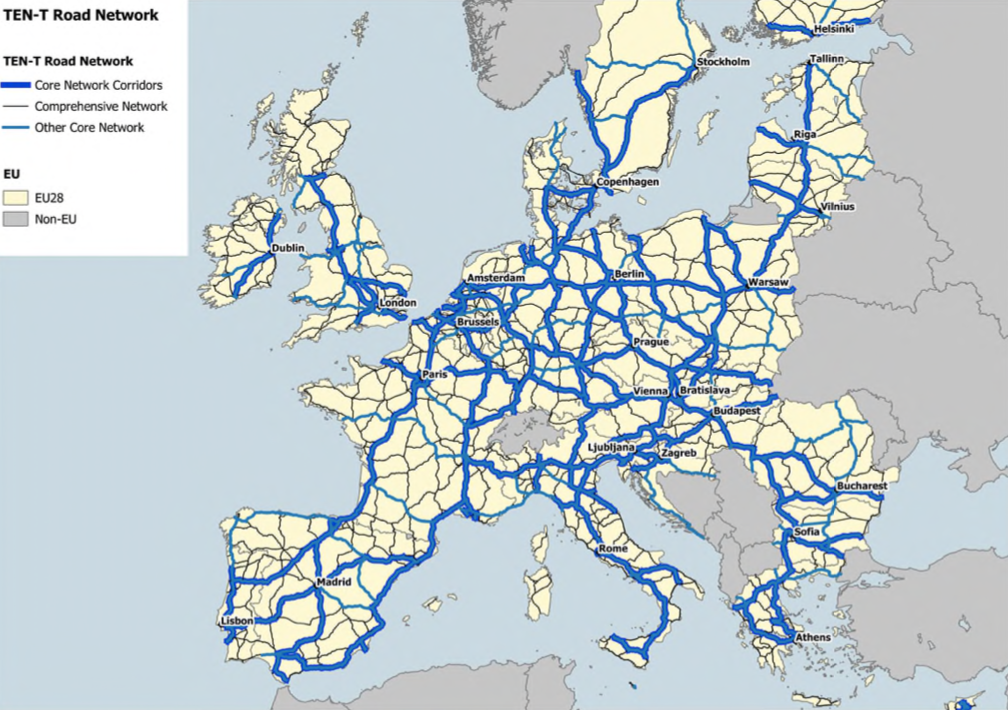 The authors of the study included here transportation that requires the driver to rest at night. This account for 27% of the total tonne-kilometre transport work carried out by companies from 28 EU countries.

The following map shows the volume of truck traffic on given TEN-T corridors. It presents the main arteries for long-distance freight transport. 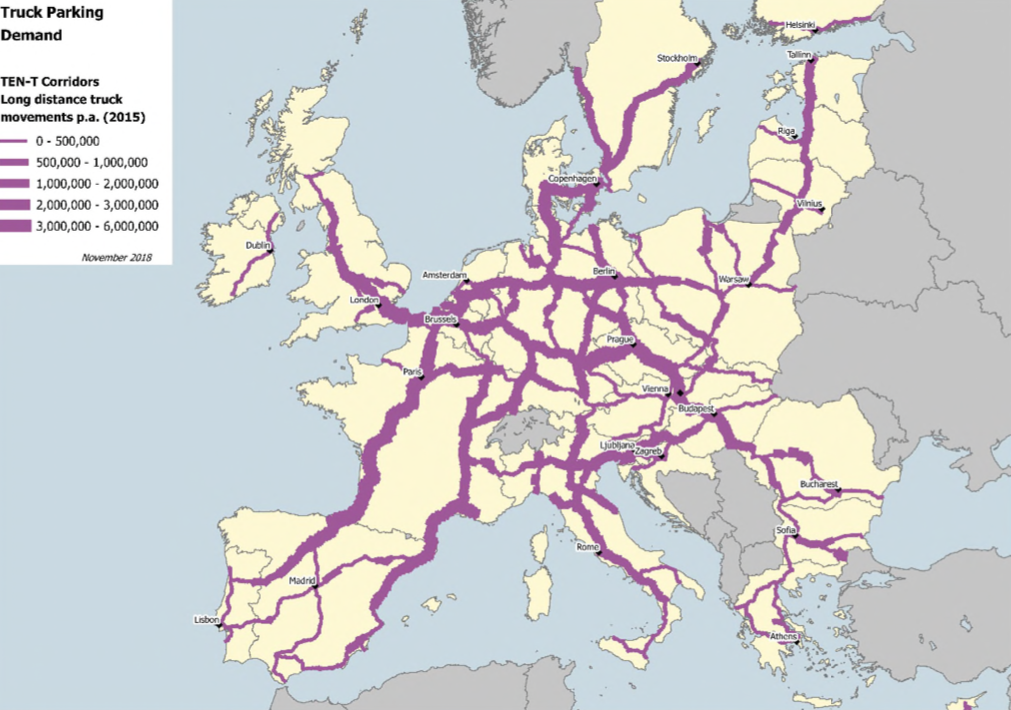 The next map shows logistics hotspots, i.e. regions where logistics centres, distribution centres and ports are concentrated and where demand for transport services is highest. They are mainly concentrated in the centre of Europe, but also extend in all directions to the ends of the continent. 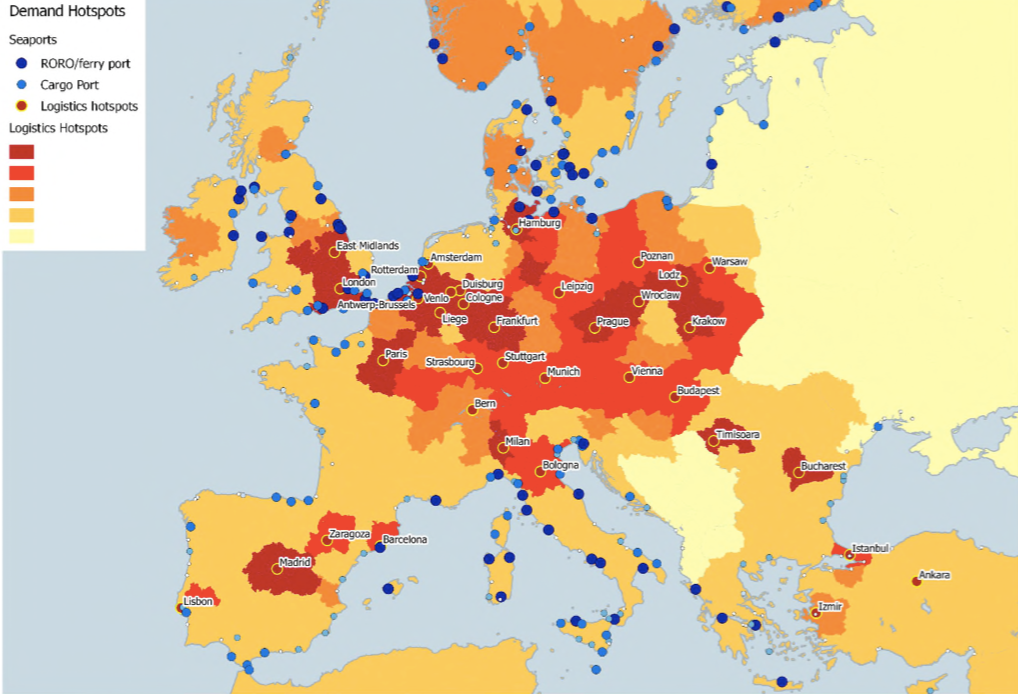 According to the authors of the report, the creation of a parking infrastructure along the corridors would make it possible to effectively meet a large part of the needs. If we are talking about the lack of safe parking lots, we cannot omit cargo theft statistics. The map below, based on TAPA data, clearly shows that crime is concentrated in so-called logistics hotspots. 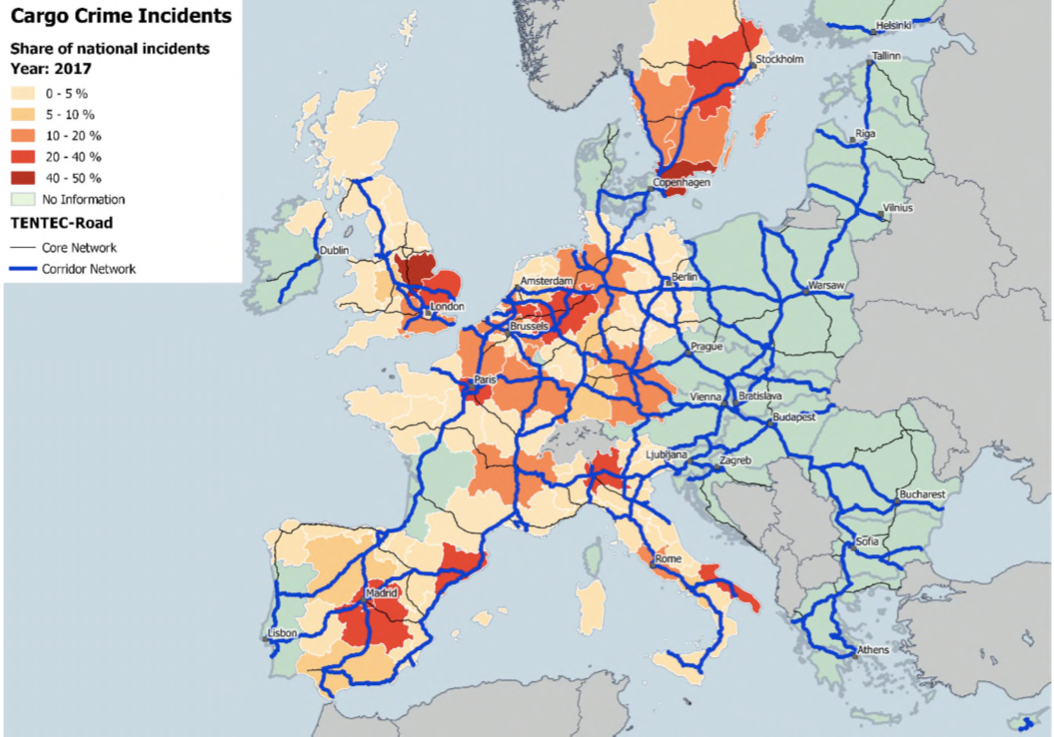 Brussels, in consortium with organisations such as IRU, DEKRA, ESPORG, Panteia, CERTH/HIT and CBRA, has developed standards for Safe and Secure Truck Park Areas (SSTPA for short).

The study found that current standards for safe parking areas (e.g. LABEL in the Netherlands, VEDA in Germany, PSR, or TAPA standards) differ significantly and that many facilities certified according to these standards are not inspected after the certificate has been granted.

EU standards cover not only safety requirements. A key role in the new standards is also played by the parking facilities, which must offer drivers the following services:

– appropriate signposting to ensure safe traffic in the parking lot,

– snacks and beverages available for sale 24/7,

For parking lots in Europe to be truly safe, certification alone is not enough. Regular checks are also necessary, in terms of both security and service levels. EU officials have therefore prepared a thorough audit procedure to ensure compliance with the rating system as well as credibility for the transport sector and public authorities. It is based on technical specifications in line with the common SSTPA standard.

SSTPA standards have already been implemented in several pilot park areas. These include Béziers in southern France, Barcelona in Spain and Lugoj in Romania.

There are only 57 certified safe park areas in Europe (ESPORG, VEDA certified): 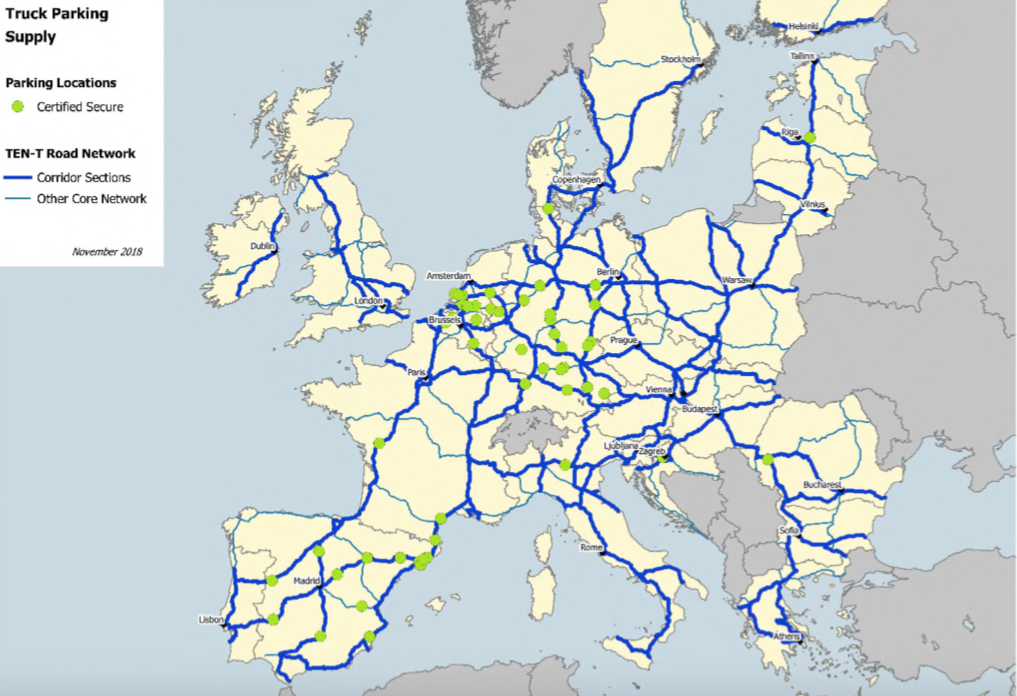 The map clearly shows that they are concentrated in only a few countries.

According to the EC report, another 500 locations have the opportunity to obtain a certificate, but this is still a drop in the ocean of needs: 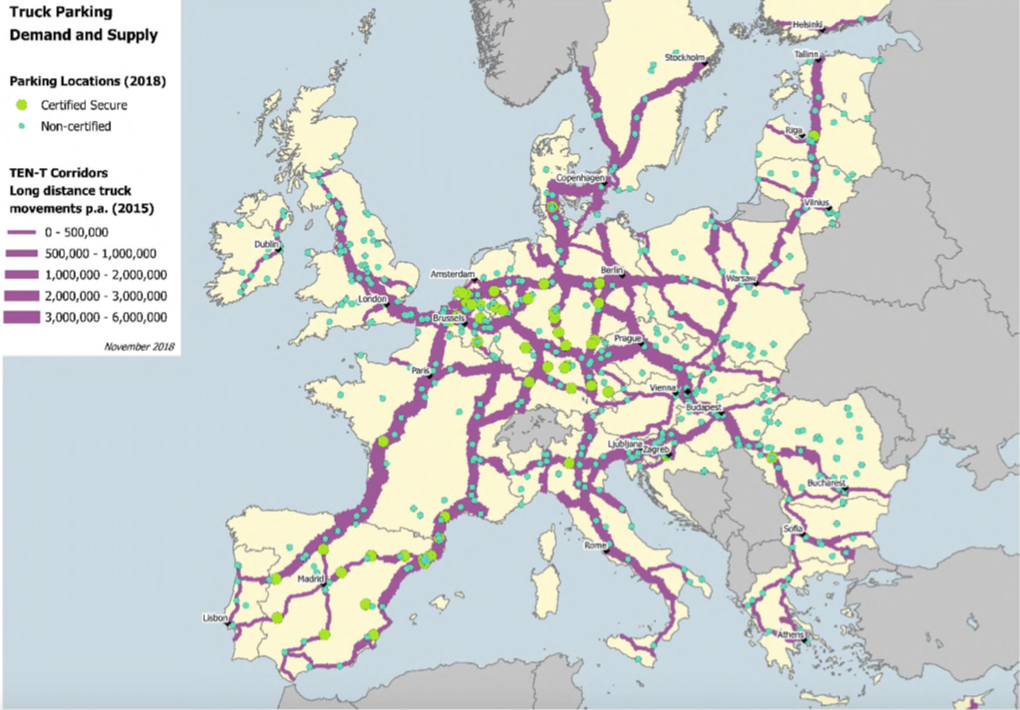