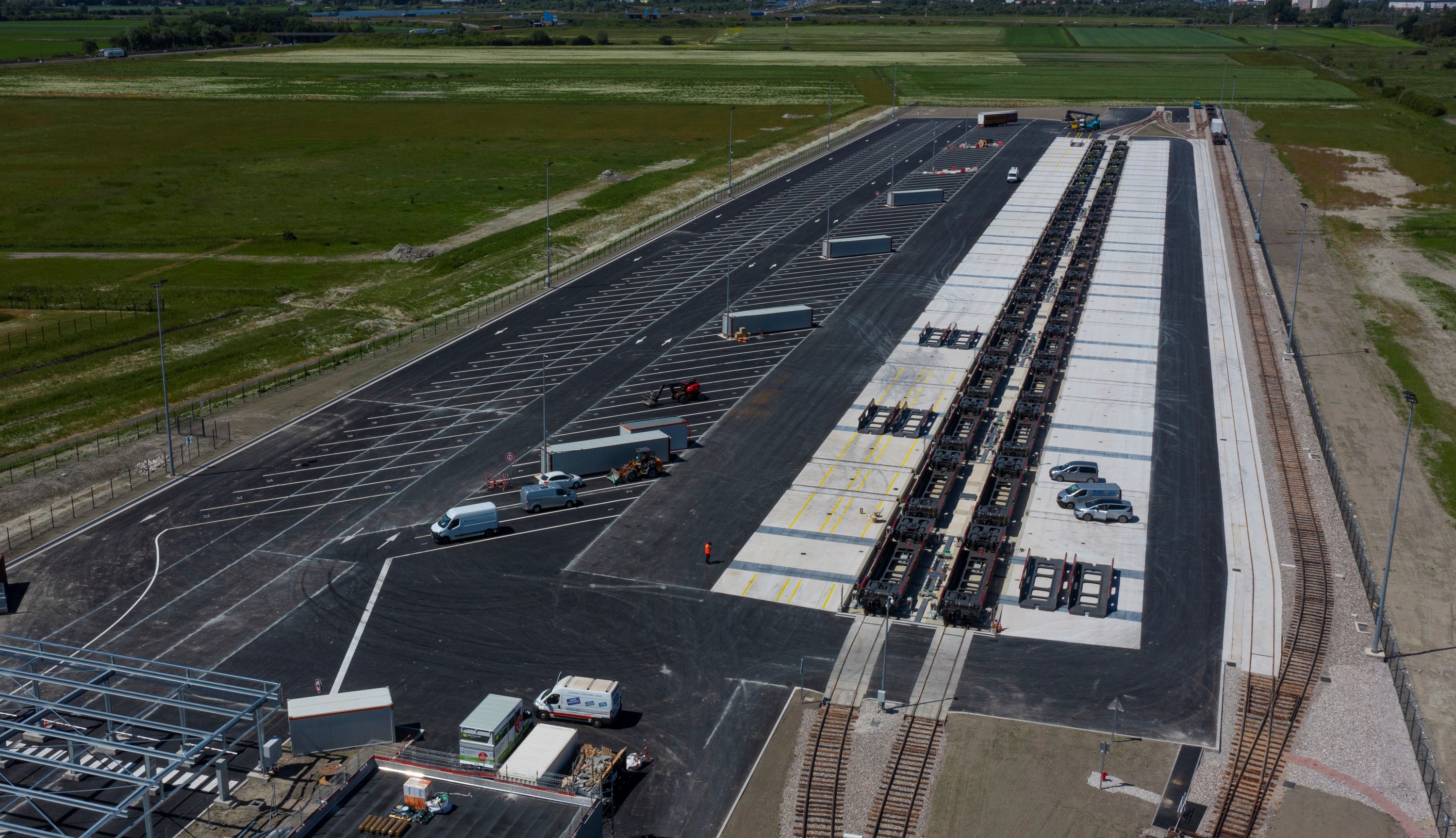 German logistics company CargoBeamer has opened its first full intermodal terminal; its first 4 roundtrips will be operated on the lane between Calais and Perpignan in southern France, with at least one more destination to join before the end of the year.

Cargobeamer says the terminal will operate using the company’s patented horizontal shifting technology for semi-trailers. The shifting process of an entire freight train with simultaneous loading and unloading takes about 20 minutes.

The terminal, located nearby the port of Calais and the Channel Tunnel, is designed to “serve as an important cornerstone in the company’s international route network”. The facility offers a link to Perpignan by the Spanish-French border, thereby facilitating intermodal transport towards the Mediterranean Sea and Iberian Peninsula.

After a one-week starting phase with two weekly roundtrips, the route will be permanently operated with four roundtrips per week thanks to cooperation partner Euro Cargo Rail (ECR), a French subsidiary of DB Cargo.

Each train offers a total of 36 seats for trailers, which consist of 24 special CargoBeamer-railcars and six usual double pocket wagons. Besides the French corridor, the Calais terminal also aims to provide intermodal transport streams towards Central and Eastern Europe. For this reason, a new route between Calais and Domodossola in Northern Italy will be launched by the end of this year.

The terminal site in Calais allows CargoBeamer to handle six train pairs daily, which means six incoming and six departing trains per day. This results in a total of 432 semi-trailers for every day.

A second expansion stage is scheduled for 2023, which Cargobeamer says will double the terminal’s capacity to a total of twelve daily train pairs.

“The opening of our first terminal is an important milestone and a real quantum leap for the development of our company. Here in Calais we are going to put our technology into regular market use for the first time and will continue to strengthen the modal shift of transports towards sustainable solutions such as rail. We therefore want to thank all our partners, sponsors and investors for their trust put in us and the good cooperation,” explains Hans-Jürgen Weidemann, CEO and founder of CargoBeamer. “We view our Calais site as the starting point and an important cornerstone of a Europe-spanning network of terminals and routes, forming an increasing number of connections towards Southern, Central and Eastern Europe by rail. Meanwhile the location of Calais promises a lot of potential with its maritime connections and the Channel Tunnel towards Britain. We are going to expand CargoBeamer’s route network continuously in the upcoming years and thus shift more semi-trailers from congested roads onto environmentally friendly rail.”