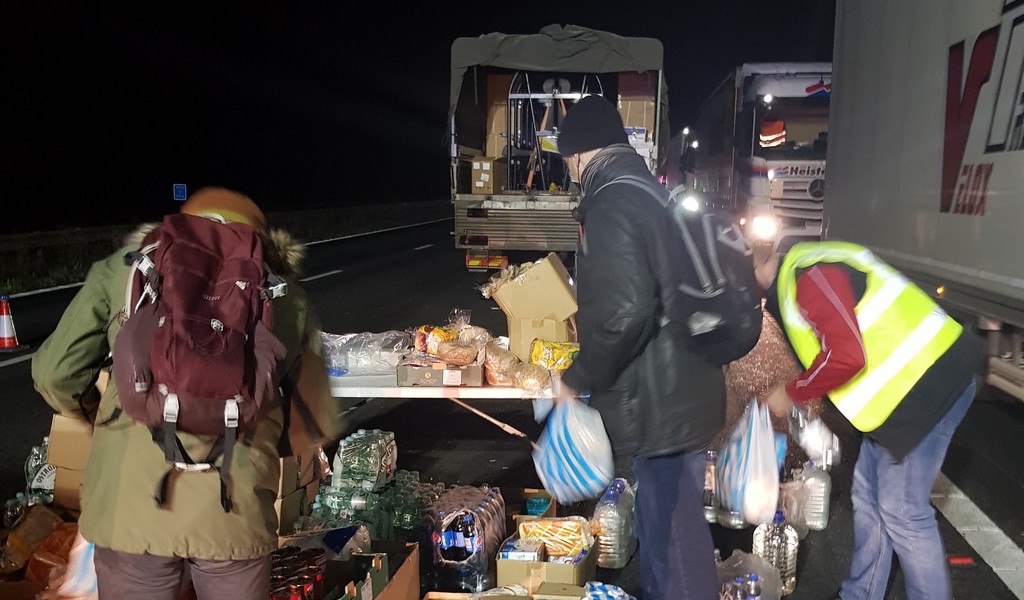 Thousands of truckers have spent Christmas awaiting coronavirus tests on the M20 and at Manston Lorry Park. It certainly wasn’t what they had planned, and given the apparent lack of facilities available, things have been tough to say the least. Fortunately, contributions from the local community and European embassies have lifted spirits and somewhat eased the pain.

As we have reported on this site, the Sikh Community, Ramsgate Football Club, Dominos Pizza, as well as countless locals, have helped by contributing essential supplies including food and water.

On Christmas Eve, a team of French Firefighters also arrived in Dover to help deliver 10,000 testing kits and help with the testing process.

Really glad to hear locals are getting supplies into #Manston over the fence. I reckon Brexit will be upon us before they are all able to leave. https://t.co/RF6LhsLMlN#brexit #brexshit #manston #dover #lorrypark pic.twitter.com/u97ilaaO4c

These contributions have continued in recent days, with increasingly more organisations and individuals doing their bit.

On Christmas Day, the Polish Embassy sent over a team of medics to test drivers, along with 16,000 testing kits. Earlier in the week, the embassy also provided food and water to the truckers stuck in Manston.

Those who test positive for coronavirus will self isolate in hotels paid for by the UK Government.

Truckers on the M20 have received supplies from locals too. In numerous cases, this was done by lowering packages from footbridges that cross the motorway. The video below is just one example of this.

#LorryDrivers #Kent #Ashford #Dover #Manston
earlier today we bought some food & it was lucky we came across two lovely guys on the J10 flyover with a mountaineering rope & they helped us lower our bag down, we wished everyone #MerryChristmas2020 pic.twitter.com/R7zilklKMV

The perceived lack of support from the UK Government has sparked a lot of anger on social media. However, there were some signs that the government added to the effort yesterday. According to Kent Online, the Ministry of Defence confirmed an extra 800 personnel would join the 300 soldiers already at the Port of Dover yesterday.

Both the UK Government and Kent County Council have always maintained that there is adequate provision for lorry drivers at Manston. This opinion does not appear to be shared by the drivers though.

VIDEO: Lorry drivers, stuck in the UK, get tested for Covid-19 to cross the Channel at Dover port pic.twitter.com/jAgdH6QYpV

The Road Haulage Association has also come under fire for its perceived lack of support. The RHA’s Managing Director finally confirmed late on Christmas Eve that they had sent food to drivers.

The poor drivers – @RHANews has sent food – we wish them a Merry Christmas after a shocking ordeal .,. pic.twitter.com/S0DsKuWfJh

Meanwhile, reports from journalists in Kent have suggested that the backlog is slowly clearing. Benoit Rochet, head operator at the Port of Calais port, told AFP News Agency yesterday that he expected „the situation should be completely taken care of” today.

However, that opinion does not appear to be universal and some expect it will still be several days before the backlog is cleared. The fact that more lorries are now joining the queue also complicates matters.