Current form of the Mobility Package will push companies into the grey area, warns the transport expert. 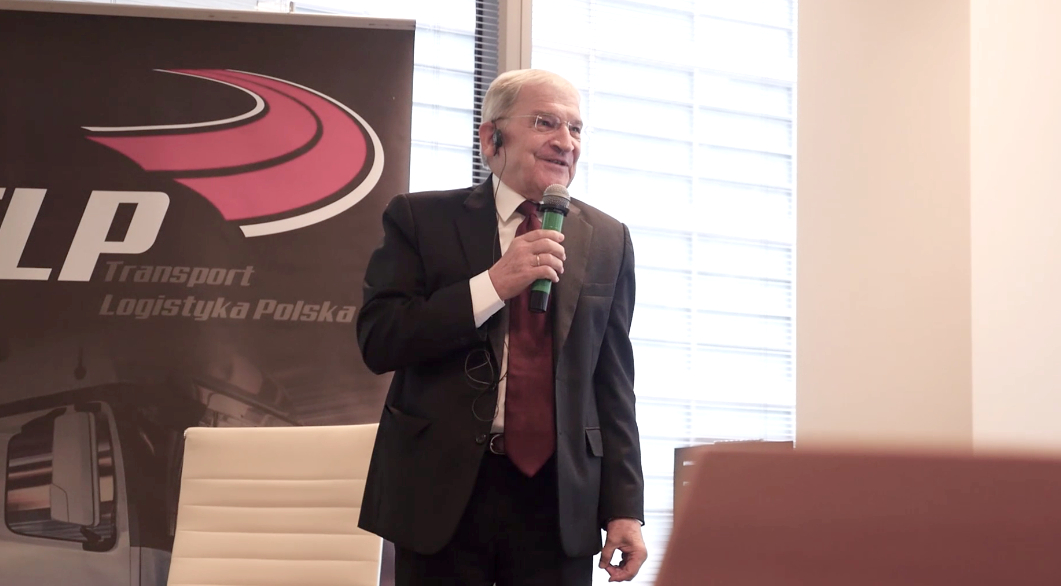 In the last week of September, MEPs voted to negotiate mandates for the Mobility Package, approving three reports unfavourable to Central and Eastern European carriers. Further negotiations on these regulations will take place in the so-called Trilogue, i.e. between the European Commission, the European Parliament and the EU Council. The first conversations started yesterday.

In an interview with Trans.INFO, Peter Klaus, professor of logistics at the Frederic Alexander University in Erlangen and Nuremberg, speaks about the reasons why the Mobility Package implemented in its current form would have dramatic consequences and would harm the European economy.

Natalia Jakubowska, Trans.INFO: A close discussion about the Mobility Package between Eastern and Western Europe is ongoing. Is consensus possible?

Professor Peter Klaus: I would like to oppose the thesis that this is an apparent conflict between East and West. I learned during numerous interviews and conversations that we have at least two different assessments of the situation. Of course, especially in Germany, where I am from, there is a group of transport companies that like to remember the times when there was no competition from Eastern Europe. These companies still want a world where they can serve the market themselves. And yes, political efforts are being made to bring the world back to this level.

However, I think that the vast majority of German companies – but this, of course, also applies to companies in the Benelux countries and France – understood that the entire European economy could not function without hundreds of thousands of drivers and vehicles from Eastern Europe that support the European transport economy.

Therefore, the problem is not “East vs. West” conflict, but the question of how to realistically achieve the goals of the Mobility Package – i.e. better social conditions, fewer road accidents, and better environmental friendliness. Some see the current package proposals as appropriate to achieve these goals. However, many criticize the fact that the current provisions of the Package, despite good intentions, do not serve these purposes in the best possible way.

If the Mobility Package were completely implemented, what scenarios are possible for the European transport sector?

If it is actually implemented in the way the proposals from the last few months have been formulated and if it is done quickly and radically, then the consequences will be quite dramatic.

On the one hand, this means that violations will escalate because some policies cannot be implemented at present. This applies especially to the ban on accommodation in the cabin. Companies will stop offering transport services, which will have dramatic consequences for the functioning of the economy. Or they will find ways to go to the grey area where the law will be obeyed on paper, but in fact, bypassed.

Both would not have functional consequences. It will do no good to anyone if the areas of unlawful activities increase and not decrease. And certainly not, if a large part of today’s transport capacity is cut because the conditions of the Mobility Package in their current form can not be realized.

Is the goal of better transparency and greater legal security impossible to achieve with such assumptions?

Right. This is predicted by the fact that many current rules are not well thought out in terms of their feasibility and effects.

So do you think that violations of the law will become more frequent?

If the current proposals are implemented tomorrow, circumvention and violation will increase. Yes!

And what about the problem of “mailbox” companies?

Of course, many provisions have already been introduced into current regulations to limit the operation of such companies. It’s just that there will be creative attempts to circumvent the rules, including the fictitious establishment of companies whose actual goals will not be clear and whose authorities will not be able to trace. Some of the currently proposed provisions are not feasible. There are not enough officials to audit this. Especially on the side of small and micro enterprises, there is more and more cleverness and opportunities to bypass regulations.

What economic consequences would the full implementation of the Mobility Package have?

As a result, smaller and micro companies from peripheral countries would stop doing business and say, “I can’t do this anymore.” This would drastically reduce the necessary transport capacity. We are talking about 10, 20 or even 30 percent of all businesses. Without them, the European industry and international trade could not function. This would have dramatic consequences.

On the other hand, stronger companies that have the financial and management capabilities to react would move their vehicles and drivers to Central Europe, where there is the highest demand. Of course, they would have to comply with the applicable pay and work conditions and social costs. This would mean an increase in transport costs throughout Europe, which are still suppressed by the fact that a Polish driver earns 5,000 – 10, 000 euro less than a German driver.

In reality, however, this would not lead to a comprehensive improvement in the living and working conditions of drivers from Eastern Europe, who would then – for the most part – maintain two places of residence. One place in the central countries, where they work and another place in the country where they come from, and they feel at home.

However, these differences in earnings also become smaller over time, so the so-called “Social dumping” argument of the European Union is no longer as justified as it used to be.

Right. We can even go  so far that it doesn’t apply anymore. We could only speak about social dumping if drivers from Eastern Europe were overworked. And the fact is, what I learned during interviews, is that drivers in Bulgaria, Romania and also in Poland are not in a worse position compared to their countrymen in agriculture and local industry are regarding what they earn, as they make much more! Talking about dumping is utterly pointless in this case.

Germany is a great supporter of this reform. Is it not so, however, that Brussels has played a bit on the grievances of German companies, and the implementation of the Mobility Package will allow non-EU transport companies to enter the European market?

The latter is one of the fears.

Regarding the first point, I would like to repeat that I do not agree when it is said that Germany is a great supporter of the Mobility Package in its current form. Earlier, I talked about two “factions” in Germany. We have a party of companies that think very defensively and nationalistically. They support the Package in its current form. This is not the majority. Most of the companies I spoke to say that they would not be able to serve their customers without involving Polish or Romanian and other foreign drivers. These companies do not agree with the policies represented by some of the associations in Brussels. There is a big difference here. Therefore, it is inappropriate to identify German politics with the position of associations that represent a very conservative, defensive, non-European opinion.

Let’s talk about the working conditions of truck drivers and the ban on spending 45-hour rest in the vehicle. I want to quote the statement of the managing director of Moeller – Internationale Spedition + Logistik GmbH. “We have the latest generation of ACTROS Mercedes with a large cabin, a decent sleeping place, a fridge and air conditioning. Drivers would undoubtedly prefer to sleep or have a break here rather than in third-class motels. There are no rules to regulate the issue of accommodation outside the truck, “says Ingo Malsbenden. “Politicians should not generalize this sensitive issue and manage it without taking reality into account. They do not want to invest but to regulate everything.” What do you say?

I can only agree with it 100 percent. I talked to 25 companies and senior management teams. Almost everyone said the same thing, but in other words: that their drivers did not consider it an advantage to be in a hotel. Of course, drivers want a secure parking place for their trucks. Of course, they want to have access to toilets and showers, places where you can prepare your food. However, they do not want to go to the hotel, located one kilometre from the site where the truck will park. I fully agree with this statement in this.

Does this mean that the EU is in favour of rules that are not justified in practice?

Exactly. This is the main criticism of the current proposals. At the same time, the ban on accommodation in a cabin is not a proposal, but a binding rule, only with the proviso that it cannot be comprehensively controlled because it is impossible to effectively manage trucks that spend the night in car parks along the highway. Where, out of 200 vehicles, 180 drivers stand legally and make a night break or a shortened 12-hour weekend break in the cabin, it is challenging to determine those 10 or 20 who should be in the hotel.

Has Brussels surpassed this topic?

You can say that.

Okay, then who will benefit from this change of regulations?

Some companies, that I have called “defensive”, who have problems competing with foreign drivers will be satisfied for now. Joy will not last long because it will have a very negative impact on the entire economy – industry, trade, consumers.

Another effect would be that very quickly the level of wages for all European drivers would have to be adjusted to the highest standard. I can’t imagine what that means, say for a Bulgarian driver. On the one hand, he would be happy if he earned 30-50 percent more than his salary now. From the Bulgarian point of view, that is very high pay. On the other hand, he would have to decide to move, move his family and integrate into a completely different world. Or – as previously mentioned – he will have to live in two different locations, which will probably be the choice of the majority.

In what direction should the reform go?

I believe that the strictest rules, such as the proposed return of drivers and vehicles to their place of residence, should be suspended for a more extended period or granted longer transition periods. Work intensively on infrastructure problems. You have to spend money and create more parking lots for trucks with good, suitable places and facilities for drivers while sleeping in the cabin so that it is not a problem.

Standardization of rules and uniform implementation in individual EU countries is also a critical issue. Since the EU is probably not able to do this today, it must increase its efforts to achieve this goal in at least three or five years.

Isn’t the time for such changes appropriate?

In particular, the idea of ​​introducing these principles in a year or two is not possible. It won’t work.

So when can we expect the rules to come into force when there is still so much controversy surrounding the topic?

I can only express my personal opinion. A lot depends on the European Parliament and the new European Commission. We’ll find out in a few weeks what priorities will be set. I hope and expect that some proposals from the last six months will have to be reviewed and that this will drag the process a year or two so that better and more sensible rules can gradually come into force. I think we are still talking about a trial for two to three years.