How do automated guided vehicles work in internal transport? Logistics 4.0 in practice. 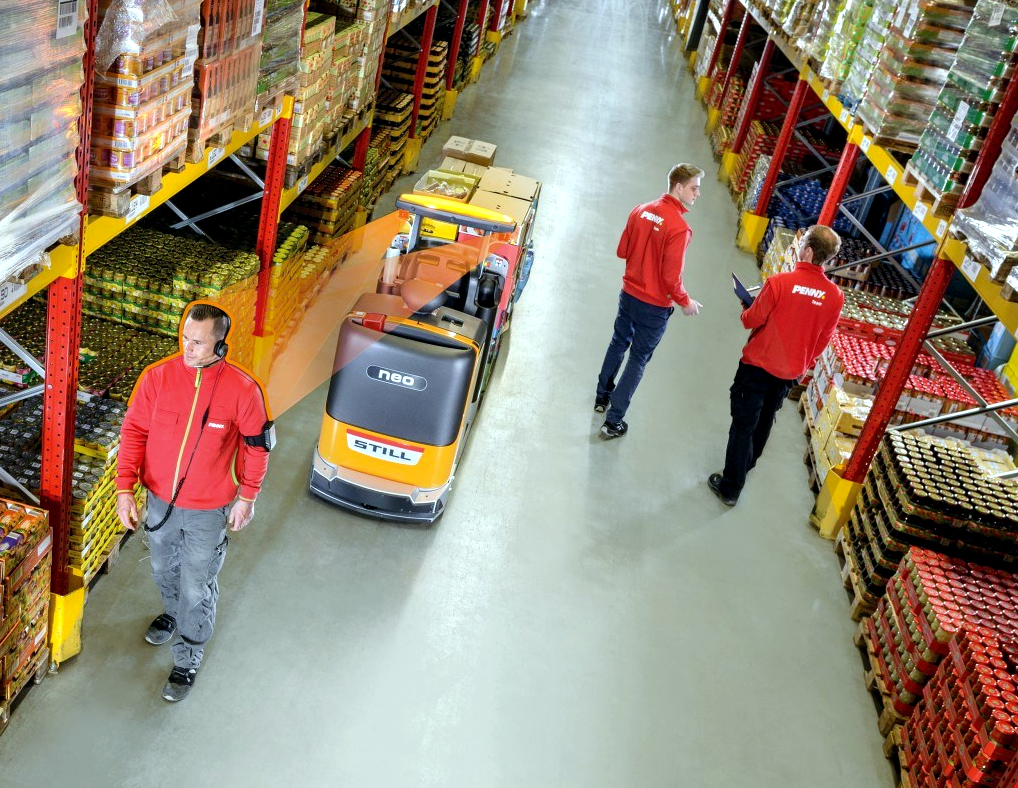 In many plants where automated guided vehicles were chosen, traditional vehicles are also in operation. This can have very positive results. The so-called mixed traffic is used e.g. in the Hörmann factory in Ichtershausen, where sectional garage doors are manufactured.

For a long time, it has been considered how to increase the efficiency of individual processes in a huge facility, where about thirty trucks are unloaded in one shift. It was decided to use automated guided forklifts (AGVs).

AGVs (Automated Guided Vehicles) are sometimes used as primary means of transport, in other places they complement the existing transport system.

Sometimes they are the only solution to avoid, for example, closing transport roads or transport routes. Although forklifts may also be a solution, they are not equipped with safety systems and have to be manned. In the case of AGV, a simple and repeatable transport operation can be carried out automatically, unattended and with guaranteed safety for the environment. Oftentimes in plants where people are to work alongside machines, the need for certainty that an automated guided vehicle will not cause an accident may raise additional concerns.

The implementation of automated guided forklift trucks still provokes a lot of controversies, especially if concurrent tasks are carried out at the plant by machines and operators driving conventional vehicles. However, examples from the market show that AGV trucks equipped with the right systems can work with people without any problems.

The system generates commands for AGVs

The Hörmann Group is one of the world’s largest manufacturers of doors and gates. Established in 1935, the company manufactured more than 20 million products. In thirty-eight factories located on three continents, it employs more than 6,000 people. One of the key locations is the plant in Ichtershausen, which manufactures sectional garage doors.

“The owners of the company are constantly looking for innovations. For some time now, they have been following reports on the implementation of automated guided vehicles. We have therefore decided to see how cost-effective and safe it is to use automated guided trucks for material delivery to the production lines,” says Ronny Weissenborn, internal logistics manager at Hörmann.

On the basis of templates describing internal transport processes taking place in the plant, created by the logistics manager, the infrastructure necessary for their automation was prepared and the implementation started.

Immediately after unloading, the goods are given a warehouse code with which they are entered into the SAP system. Pallets and mesh boxes are then transported to the buffer zone. From there, they are picked up by FM-X 14 reach trucks, transported and placed on a conveyor belt.

At the same time, after scanning the load label, the SAP system generates a driving command that goes to the EXP 20 automated guided stacker truck. It collects the goods itself from the final section of the conveyor and transports them to their final destination – one of the twelve locations indicated by the system, located in two production halls.

AGVs identify the route with floor-mounted magnetic transponders. In order to guarantee the safety of the infrastructure and other road users during the journey, the EXP 20 is equipped with laser scanners that immediately stop the truck if another object appears in its immediate vicinity. Once the goods are delivered, the trolley takes empty pallets from the points in the vicinity of the production line and transports them to the unloading area.

“The automated process of supplying materials for the production and retrieval of empty pallets works so well that we want to include the collection of waste bins in the AGV truck’s tasks as well. It would be enough for an employee to enter information about the location of the cargo in the SAP system and EXP could collect it,” reveals Ronny Weissenborn.

Thanks to automation, the safest one-way route organisation in mixed traffic has been introduced in this section.

The EXP operates 24 hours a day, so that three warehouse employees could be assigned to other tasks.

Interestingly, although the truck is programmed to run slower than its manual counterpart, it is more productive. With no need for breaks, it can perform more tasks in one shift. Driving at a steady pace also reduces maintenance costs and extends the service life, and, in combination with safety systems installed, ensures accident-free driving. The next step involves automating the process of battery charging.

AGV only complements the line. While AGV is carrying out its tasks, other traditional means of internal transport perform their normal functions.