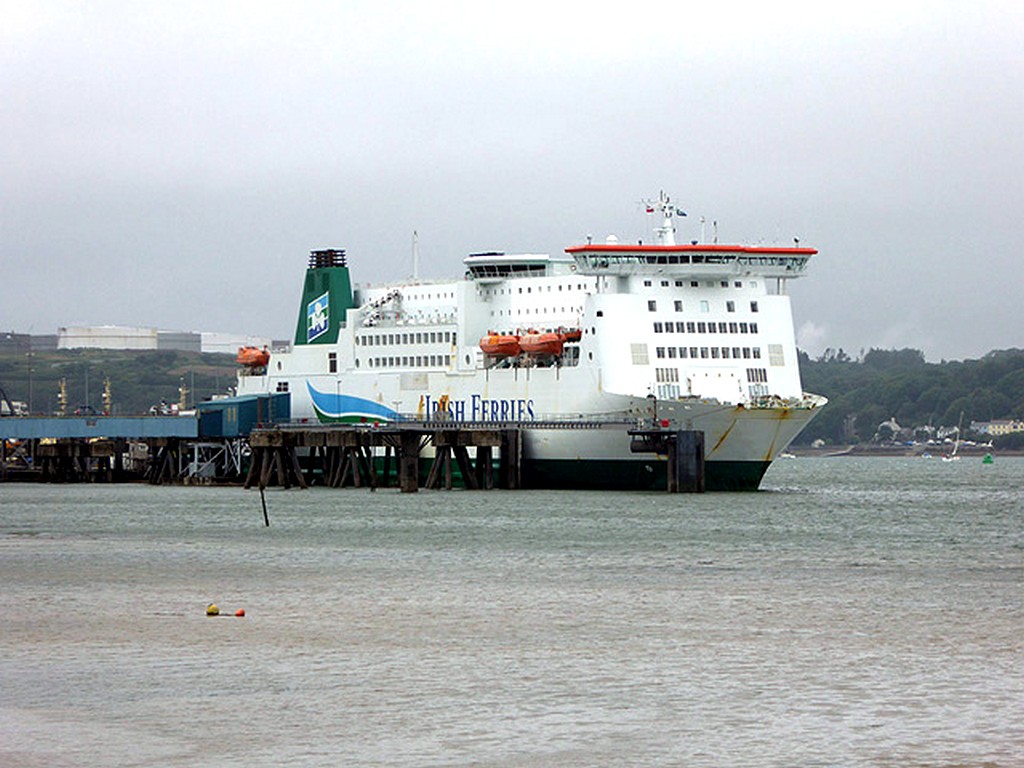 Irish Ferries has officially announced that the Blue Star 1 will serve its Rosslare to Pembroke route, becoming the fastest Britain-Ireland RoRo passenger ship in the process. The company has also announced a Dover-Calais service.

As we revealed earlier this week, the Blue Star 1 was seen being painted with an Irish Ferries livery at the Greek port of Piraeus.

It had been rumoured that the vessel would operate between Dublin and Cherbourg. However, the Blue Star 1 will instead be used on the Rosslare to Pembroke route. Thanks to the ferry’s top-speed of 28 knots, it will be the fastest Britain-Ireland RoRo passenger ship once it starts operating later in the spring.

The announcement will be especially welcomed in Wales, which has seen freight volumes at its ports collapse since the end of the Brexit transition period. It could also bring the UK landbridge back into play for some Irish hauliers.

Built in 2000, the Blue Star One holds a total of 1,890 passengers and 780 vehicles. Irish Ferries says the ship offers a host of quality facilities, including 192 cabins for freight drivers/passengers, a self-service restaurant, a café/bar, Club Class lounge, onboard duty-free shop, children’s play area and spacious outdoor decks.

We are very pleased to add a quality ship of the calibre of the versatile Blue Star 1 to the Irish Ferries fleet. This ship will be the fastest RoRo Passenger ship operating between Britain and Ireland and this will help ensure schedule integrity. The introduction of this ship underlines our commitment to the Rosslare to Pembroke route, the primary shipping corridor between Ireland and South Wales. It also underlines our commitment to the significant contribution that this route makes in facilitating trade for both exporters and importers as well as facilitating essential passenger movements and future tourists as the country re-opens post COVID-19.

The new service is part of Irish Ferries’ plan to offer an inclusive ferry service across the UK landbridge. In it’s statement, the company said:

As part of our commitment to the movement of freight on and off the Island of Ireland to both the UK and Europe, this additional capacity on the Dover – Calais route will significantly strengthen the capacity and reliability of the landbridge for exporters and importers. Hauliers will now have one operator providing an inclusive service on the Dublin – Holyhead, Rosslare – Pembroke and Dover – Calais routes. This will allow exporters and importers easier, cheaper, and quicker access to our European markets via the Common Transit Convention.

Doug Bannister, Chief Executive, Port of Dover, said he was delighted by the announcement:

“We are delighted to welcome Irish Ferries to Dover. This announcement gives the millions of customers across the UK and the Republic of Ireland who value the intrinsic benefits of the shortest sea crossing to Europe, the prospect of even more choice. We believe the inclusive landbridge product will be popular with Irish exporters and will strengthen the just in time supply chain into the European Union. This is a clear signal of market confidence in the Dover route and will complement the resilient services currently provided. We wish Irish Ferries every success and look forward to having them on the route in the summer and working together as part of the Dover team building the future success of the Short Straits.”

Delivery of the Blue Star 1 is expected in early April, while the Dover Calais service is planned to start in June.