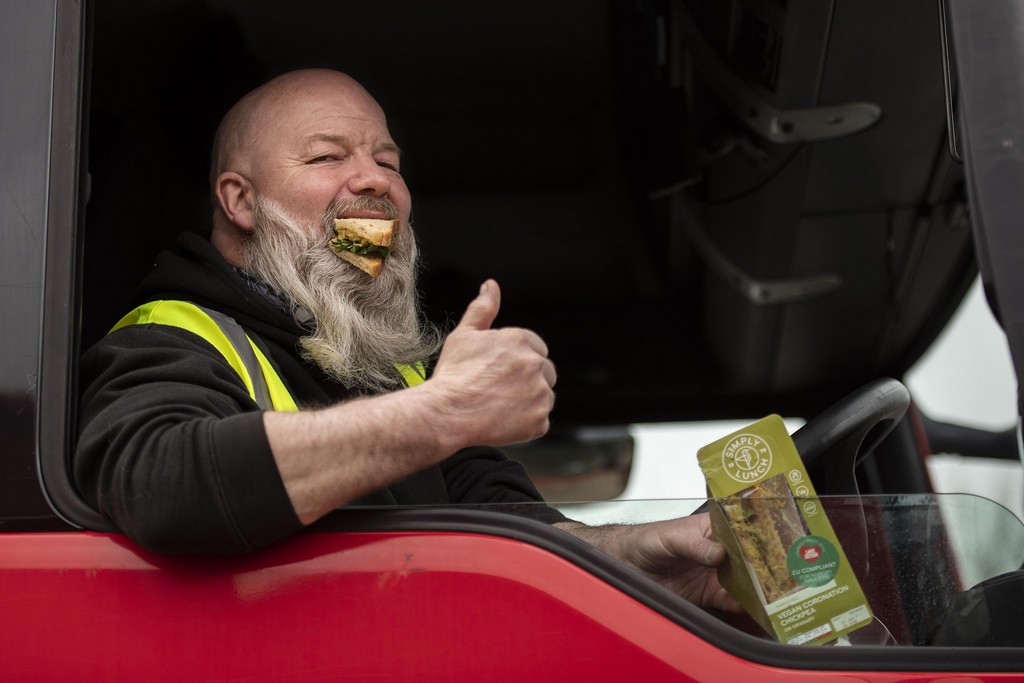 Lorry drivers heading from the UK to the EU via the Channel Tunnel were handed free vegan sandwiches last weekend as part of a promo campaign by LoveSeitan and Simply Lunch.

Thanks to the sandwiches being vegan, they cannot be confiscated by EU customs officers in the way that sandwiches with meat or dairy products can. In the words of LoveSeitan and Simply Lunch, this means „The EU’s tuned our truckers vegan!”

The promotional campaign, labelled as „Operation Snack”, has been backed by RHA chief executive Richard Burnett, who is a vegan himself:

This is a perfect example of Brexit legislation gone mad. What was once a simple ham and cheese sandwich is now classed as a personal import and is now prohibited. It’s ridiculous. I’m vegan and I’m really pleased that LoveSeitan have come up with an alternative to meat and dairy that is not only healthy but is also ‘legal’. It ticks all the boxes.  We would like to see seitan made available to HGV drivers on all crossings to mainland Europe.

Co-Founder of LoveSeitan, Steve Swindon, is keen for other vegan suppliers to join the scheme. Should others come onboard, truckers may well be able to get their hands on more free vegan grub in the future:

Hauliers are essential to the British economy. They are key workers in need of good food, especially as their sandwiches are being taken from them as they try to cross into the EU. We couldn’t just standby and watch their food being confiscated. The seitan sandwiches we’ve assembled with Simply Lunch are high in protein, tasty, and EU-compliant as they have no animal products, so they should satisfy both the hauliers and EU officials checking their food. Plant-based food is quite topical at the moment as it’s Veganuary, so we’re inviting other vegan food suppliers to join this initiative and support British hauliers. If you want to help, let us know and join Operation Snack!

When the UK Government warned lorry drivers back in December that their ham and cheese sandwiches could be confiscated after Brexit, many thought the prospect was ridiculous. However, as we reported earlier this month, it is actually happening.

Since that report, video footage has emerged of sandwiches being confiscated at a Dutch port. While explaining why a driver’s sandwich needed to be confiscated, the customs officer in the video is heard saying „Welcome to the Brexit sir, I’m sorry.”