Man driving against traffic caused horrible accident. Could it have been avoided? We advise you what to do 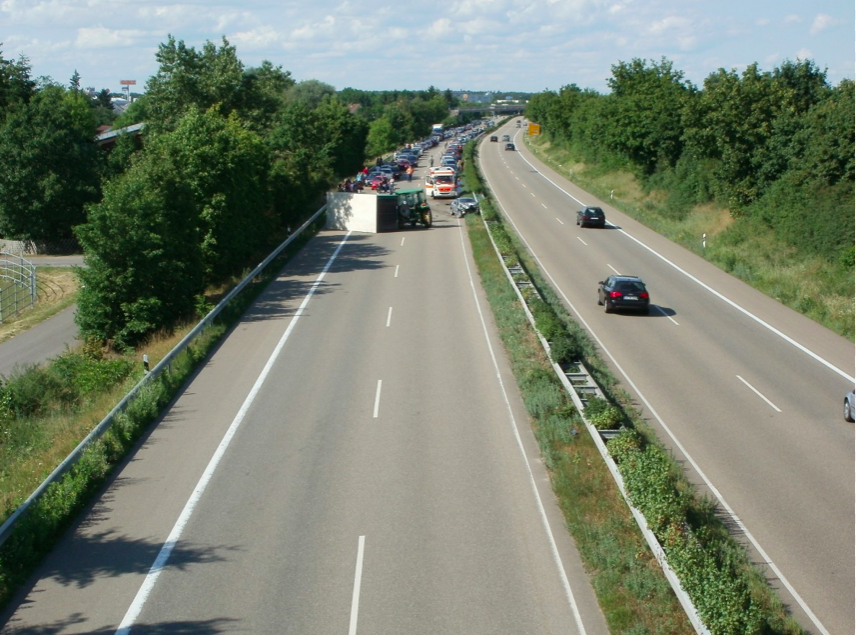 A driver who encounters a vehicle driving against the traffic on his way often has only a fraction of a second to react properly. Last week, there was a dramatic crash on the A3 motorway in Germany caused by wrong-way driving. How should you behave in such a situation?

On the A3 near Cologne a fatal accident was caused by a driver driving against the traffic. A Volkswagen passenger car hit a Mercedes van, resulting in the death of both the Polo driver and the woman driving the Mercedes.

Could this tragedy have been avoided? It is worth recalling at this point, the story of a German trucker who a year ago in a similar situation had all his wits about him and saved many traffic users from an accident.

“I would do it again at any time!” said Rolf Küster, a German truck driver, after the movie-like action that took place on the A650 freeway on August 15. The man spotted a vehicle going against the traffic. Without much time to think about it, he acted quickly and set his truck across the road to protect other road users from the road hog.

Drivers driving on the motorway in the opposite direction were flashing lights to slow down. However, there was no warning on the radio about the vehicle going against the traffic. Then I saw the driver approaching us, so I had to brake hard. Then I just noticed that the cars behind me were driving at high speed, so I set my truck sideways so that there would be no serious accident,” Küster tells the story for German television SWR3.

The drivers who were stopped by the trucker had no idea what had actually happened. Some of them accused the German that his behaviour on the road caused a traffic jam and wasted their time. Fortunately, the police arrived on time and explained what happened. The officers thanked Küster several times for his exemplary attitude and confirmed that he did the right thing and prevented a tragedy.

Most common reasons for wrong-way driving

According to Arag insurance company, a total of 87 accidents caused by drivers driving against the traffic in Germany in 2018 killed 15 people. Analyses of the ADAC and ÖAMTC automobile clubs show that the most common causes of wrong-way driving are poor visibility, low traffic, drink-driving and driver fatigue.

Wrong-way driving can be costly

ARAG experts also point out that driving against the traffic in Germany is fined up to €200, penalty points and a driving ban. If other road users are at risk, this may even be considered a criminal offence, punishable by a fine or a penalty of up to five years’ imprisonment and a driving ban.

What to do if you encounter a driver going against the traffic?

– Slow down and turn on the hazard lights. The Austrian automobile club ÖAMTC stresses that any necessary evasive manoeuvres must be carried out at a low speed, otherwise there is a risk of slipping.

– Select the outermost right lane. Keep an eye on the emergency lane so that if necessary, you can use it to evade the vehicle driving from the opposite direction.

– Do not overtake and keep a sufficient distance from the vehicle in front under all circumstances.

– Stay calm, as much as possible.

– If possible, drive  to the parking lot and wait there until the situation calms down (a message should be sent on the radio).

– If you notice a driver driving against the current, use the emergency telephone (in Germany) available on the road and notify the police (if your language skills allow you to do so). This will help to automatically determine the exact location. If you are calling from a mobile phone, pay attention to the exact kilometres of the motorway in order to be able to determine the precise location.

What if you have gone against the traffic?

– First of all, do not try to turn back.

– Never cross the motorway. In times of stress, the risk of overlooking an oncoming vehicle is too high.

– To warn other road users, switch on the lights and hazard warning lights immediately.

– Then drive up to the nearest edge of the road and park the vehicle close to the barrier.

– Get out of the car carefully, go behind the barrier and call the police from there.