Manufacturing Execution System (MES) is, in other words, a system of a production implementation. Information technology, software and automation elements allow information to be collected directly from workstations in real time. Generally speaking, MES is responsible for ensuring the highest possible quality of production, also in the automotive sector.

A large automotive component manufacturer has received a requirement from an end user – a car manufacturer – to ensure full traceability of each and every single component. The implementation of the task also concerned one of the Polish companies, which is a part of international concern, and which supplies elements of these components. The identification was to cover the entire production phase from the entry of the raw materials to packaging and shipping.

The detailed requirements for an integrated system for tracking production and statistical analysis of process data also included the identification of individual elements by means of unique DMC (Data Matrix Code) codes applied to each element by means of a laser, as well as a link between the internally assigned product identifier and the recipient’s DMC identification code.

From the point of view of the system operation, the key became the functioning of the central database, the graphical user interface, automatic data acquisition from control systems, automatic identification of elements through cameras and DMC code readers, automatic identification of the type of components and batch numbers using barcode scanners. It has also become important that supplementary data can be entered by operator stations.

The key to preparing specific solutions was to analyse the entire production process and “match” the relevant analytical solutions. The MES system was implemented by Siemens together with its local partner (ASKOM). The production of elements starts from the stage of acceptance from the supplier, which is usually the smelter, the basic raw material, i.e. aluminium. It is delivered in bars. The raw material is melted, heated and mixed with additives. Casting is done fully automatically by a robot.

Then the finished castings are subjected to additional heating in furnaces. The elements prepared in this way are introduced to the main processing line. The first device on the line is a laser marking each casting with an individual code written in the form of a DMC matrix.

Next stages of castings processing are performed on fully automated machines. After each stage, the most important quality characteristics, individual dimensions, diameters, etc. are measured automatically or manually. The last stage of processing is graphitising, after which the castings are sent to an external company for anodising.

After returning from anodising, the castings are sent to the last stage of production, i.e. completion of the finished element, together with marking with the recipient’s code (also in the form of a DMC matrix) and final control. All that remains is packaging and shipping to the recipient.

The following elements of the MES SIMATIC IT system were used for tracking:

– Production Modeller – a central module that allows graphical modelling of the production process;

– Historian – a module used to collect and archive data from the automation system (parameters of the production process);

In order to create a complete production process tracking system within the MES implementation, it was also necessary to connect this system with the automation layer, as well as with additional cameras installed that recognise specific elements on the basis of their DMC code number (in critical locations, from the point of view of process traceability). The connection with the automatics was realized by means of a dedicated computer, responsible for direct communication with the controllers. It is also an OPC server that delivers the required data to the SIMATIC IT system.

The role of a link with a camera system that identifies individual elements is performed by a computer (saving all data in the form of text files).

The implementation of a comprehensive system for tracking the production of car components allowed to ensure full traceability of materials throughout the production process. Thanks to this tracking of all materials, it was possible to generate a complete genealogy for each produced element as well as for each batch of aluminium. This speeds up the manufacturers’ response to potential sources of risk, facilitates the analysis of their causes and allows them to take immediate corrective action. 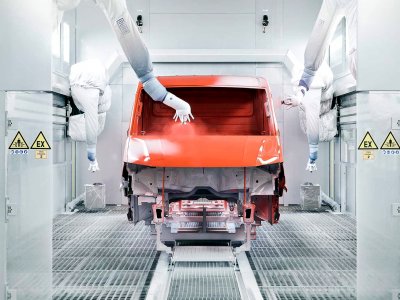 German automotive sector is expecting peak of crisis soon but plans to resume pr...
Good news for carriers! Automotive manufacturers are slowly restoring production
Amazon closed all its logistics centres in France due to a court verdict. „The d...