Supply chain visibility provider FourKites has maintained its position as a leader in the latest Gartner Magic Quadrant for Real-Time Transportation Visibility Platforms. The company also recently announced it had outpaced its EMEA growth targets, achieving 148% growth in shipments over the last 12 months. 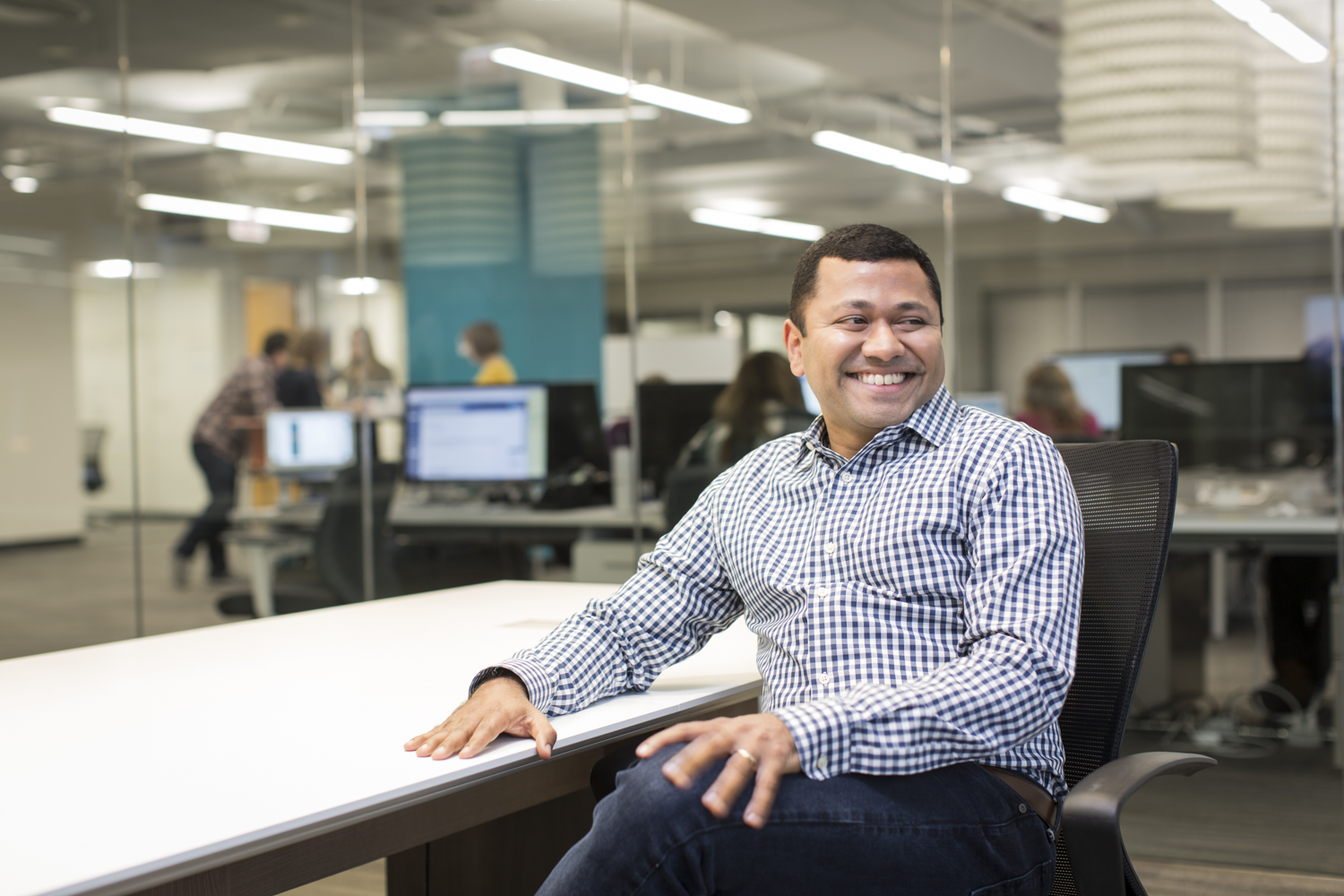 Key to this has been the FourKites’ expansion in Europe, which has seen the recruitment of industry veterans, the opening of new offices, and the acquisition of German supply chain visibility provider NIC-place.

We will publish the interview in two parts. The articles will cover:

Thanks for taking the time to talk to us at Trans.INFO. Nowadays, supply chain visibility is something almost all of us are familiar with, whether it’s individuals tracking their parcel deliveries or big businesses using tools to manage their supply chains. This wasn’t necessarily so obvious when the foundations were first being laid for FourKites. What was it that inspired you to start up the business, and how has FourKites progressed in relation to your original expectations?

We started the company in 2014, so it’s been over seven years now since we founded FourKites.

When you look back at the supply chain and logistics industry, the concept of visibility was not anything new, nor was it new when we started. Some sort of visibility always existed. Before FourKites, I would say the predominant technology was EDI, Electronic Data Interchange – EDI 214. The other would have been milestone based visibility that you would get from your trading partners, whether it be carriers, 3PLs or a freight forwarder. You’d get updates on major events and milestones after they are a fact.

So that’s what the industry used, and it was okay for how supply chains were working at that time – it was enough to get things going. Then, however, a lot of things changed in the supply chain industry over a short time period. A lot of change was driven by the Amazons of the world, who really altered expectations when it came to B2C deliveries. That then slowly propagated into the B2B industry. The demand for faster deliveries and tracking packages really began to happen in the 2013-2014 timeframe.

Amazon invested a lot of time and effort into building an efficient supply chain. They had control over everything and then their competitors, like the Walmarts and Tescos of this world, wanted to reduce their costs. The way to do that was to really optimise inventory. To achieve this, they started putting pressure on their suppliers – using things like fines and penalties for showing up late or even early. So that in turn put pressure on the supply chain.

Then there’s also the availability of data. You can talk about real time visibility all day long, but if the carriers, freight forwarders and 4PLs don’t have the technology to really collect the data, then things are just stuck and there’s nothing we can do about it.

In North America, that change started with the ELD (electronic logging device) mandate, which meant every truck had to have GPS. In Europe, I think even before that, there was some sort of mandate in place. So all those things came together.

We saw the opportunity to do something here. Around that time, I was working for TMS companies like i2, Blue Yonder and Oracle. I was mostly working with products on the shipper side, so I could see firsthand what the shippers were doing.

The lack of visibility was evident – they were always on the phone or sending emails in a reactive fashion.

So there was that pain point, the fact the industry was being pushed towards change, and the need for data – this was what really triggered the launch of FourKites.

As for how FourKites has progressed, when you start a company, your expectations are low. If you look at the probability of success, many of the companies that get founded never take off.

Supply chain visibility is not a ‘nice to have’ anymore; it became a necessity and I think that helped. The demand is more than we thought and the growth is more than we expected.

Yet looking back, I’m not surprised given all the supply chain disruptions and all the events that have happened over the last 3-4 years.

Observers of the market you operate in will know Chicago is undoubtedly the world’s supply chain visibility capital. Obviously Chicago is a city with a lot of talent, but is there any particular reason why the city has excelled in this area? Or is it just a coincidence?

For a city to emerge as a hub for a certain industry or startup, in this case supply chain visibility, a few things have to come together.

The first one is, like you said, availability of talent. There are so many universities in Chicago and also the Greater Chicago area. For example, after starting the company, I learned that the University of Illinois in Urbana Champaign produces the largest number of engineering graduates in the United States in terms of sheer volume. So the availability of talent is super important, and that is clearly there in Chicago.

The second factor is proximity to your customers and prospective customers. When you think about the United States, even for companies that are headquartered right on the East Coast or West Coast, their logistics operations are based out of the Midwest.

If you think about the East Coast, such as New York, most of the financial services companies are right in that area. If you look at the West Coast, it’s mostly the tech sector. However, if you look at the logistics operations of many traditional heavyweight manufacturing companies you’ll see many of them are based around the Midwest. I think Chicago is lucky because it is a short flight from anywhere, given its location right in the middle of the country. So, proximity to customers has really helped and this is huge for us.

When we started the company and were getting those initial introductions – the first few customers or pilots and everything else, it was easy for us to do because it was within our backyard.

So there’s a large brokerage community in Chicago, a lot of talent and people who know logistics. I think those are the three things that really helped Chicago thrive when it comes to supply chain startups.

A noticeable area of growth among the big supply chain visibility companies is of course in Europe, where you have opened new offices and made a key acquisition. There’s also been a lot of recruitment of experienced staff over here too. However, besides this, I understand that you personally have had some experience of working in Europe. How much has this experience helped you with regards to your plans for the European market?

I got to really understand the differences of how logistics and transportation is managed in Europe versus North America – the concept of subcontractors for example, or data privacy, or how the communication happens when it comes to slot booking, or tendering. All of those things are very different.

So these are the things I learned during my time in Europe, and it became very clear that you cannot really transplant technology from North America and just try to sell it here.

Number one, it doesn’t work because it doesn’t make changes according to the local rules and regulations, and all the different things such as how business is being done. Number two, as you said, there’s the cultural aspects – building trust and everything else. There’s a face to face selling culture. It was very clear to me from the beginning we had to do something different. We took a very cautious approach towards our expansion in Europe.

For example, one of the key outputs that we provide our customers with is ETA (estimated time of arrival). The way we calculate ETA in North America is complex because there are so many factors, including the driver’s hours, the local driving restrictions and everything else. That said, at least it is standard across all the states in the US. When it comes to Europe, where many trucks are doing cross-border trips across multiple countries, the driving restrictions might be different.

We had to work out how to incorporate those kinds of things into our algorithms. It might sound easy, but when you incorporate all the different factors that are external and internal, it becomes complex. So how did we perfect those things? By working with customers.

Then it was a matter of building the team. We recruited talent from local markets; people who know the space and can be productive in a short timeframe.

Finally, we also realised that when it comes to supply chain visibility in the US, it’s a one-size-fits-all approach. You can have the same solution for shippers and carriers. On the other hand, in Europe, we learned that although our shipper solution can be sold to carriers, their use cases are very different.

That meant we had to invest in something that carriers wanted and we could sell to them. The product we have for carriers comes from the NIC-place acquisition. NIC-place is the market leader in supply chain visibility software solutions specifically designed for transport companies, carriers and logistics service providers. We could have built such a solution on our own, but it would have taken 3-4 years, and we were keen to shorten that timeframe. When we acquired NIC-place in January 2022, our combined over-the-road, rail and ocean carrier networks of FourKites and NIC-place will create the largest multimodal carrier network in Europe, ready to serve global shippers with the most comprehensive end-to-end global supply chain visibility platform.

The US and European markets are different. It’s a huge opportunity in Europe; the GDP as a whole is bigger than North America. If we look at the transportation spend, it is also more than North America. So clearly the market is here. It is nonetheless a complex one that requires a customised approach to really win – spanning technology, people, and the way you sell. That’s what we’re doing.