The Swedes are conducting cabotage research with the involvement of international carriers. The data is collected in an app where drivers record license plate numbers of foreign trucks.

The “Cabotagestudien” research project started a new cycle in September: Danish drivers and all other interested parties were encouraged to record license plate numbers of foreign trucks spotted on the road in Scandinavia in a special application. The main period of data collection in Sweden has already ended, although the application is still active and the data recorded. In September, the app tests were launched in Denmark.

Having actively encouraged the tests participation, Jan Villadsen, CEO of 3F Transport – one of Denmark’s leading transport companies – hopes that the study results will allow the government to combat unfair practices in the transport market.

Cabotagestudien is an international road freight traffic study in Scandinavia. It aims to obtain independent data on international freight transport carried out in Scandinavian countries. Its results will contribute to developing knowledge needed by the society, decision-makers and authorities, and will serve as a basis for further research. The opening of the European market for goods and services, including transport services, drives trade development, global competitiveness and economic growth. At the same time, it has raised concerns about job security in the national transport industry and regulatory compliance. Are they justified? The data collected and carefully analysed within the Cabotagestudien will help to determine this. As the project authors believe, the continuous data inflow makes it possible to develop analyses and scientific reports, which will contribute to a better understanding of the transport industry problems both in Scandinavia and throughout Europe.

What does the study consist of?

With the help of thousands volunteers, especially truck drivers, the Cabotagestudien application collects data and compiles statistics on international freight transport. The drivers using the app record the license plate number of a foreign truck observed e.g. in a parking lot. The location where such a vehicle has been spotted is also recorded. An appropriate number of users allows for creating a transport monitoring, where the vehicles are “tracked,” obviously in compliance with data protection regulations. 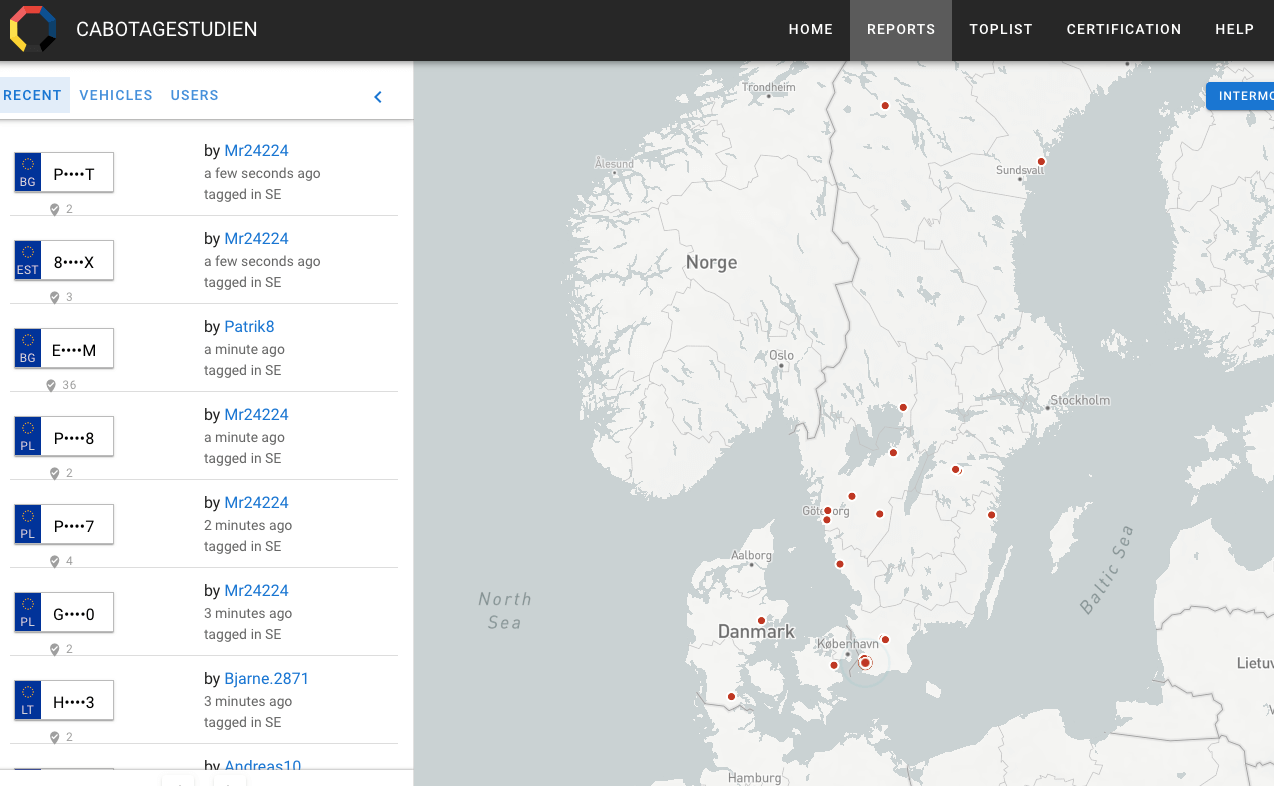 At first glance, the app performance seems uncomplicated. However, the following question quickly arises: How does the application distinguish vehicles performing international transport from those performing cabotage operations? We’ve asked one of the project authors, Michał Filipiak, who specializes in software and data engineering.

From the user’s perspective, the app’s operation is relatively simple. The user enters license plate data and optionally, its country code. The new app version makes it possible to tag not only vehicles, but also “incidents” (in the broad sense of the word.) In such a case, you don’t need to provide any license plate data, just either describe or send a photo of the incident, so that we can understand what the report concerns,” explains the project co-author.

As Michał Filipiak emphasizes, data such as license plates, photos and comments are completely confidential.

The data analysis is largely automatic. Provided that the vehicle data is sufficient, the algorithm classifies the transport as international, cabotage or intermodal.

In simple terms, the classification algorithm work can be compared to visual analysis of map data. If we place observation points on the map and connect them with lines, we can see some patterns in the “shapes” that these lines form. For example, some shapes will consist of relatively short sections and will be grouped (geographically) together with other similar shapes. This kind of pattern is common for intermodal transport, which can be additionally validated by comparing observation points with intermodal hubs locations, the expert explains.

As Filipiak notes, such an analysis is slightly more technically complicated in the case of cabotage. It is important to distinguish whether consecutive observation points (on the map) belong to the same transport or not.

Imagine points A, B and C on the map, each with exact time and date. We show such a map to a professional driver and ask whether while driving from A to C, they would go through B. If the answer was a definite “no”, then probably a loading/unloading took place between A and C (not necessarily at B, but somewhere “towards” it.) This is how the algorithm operation can be described metaphorically: it examines changes in time, distance and direction between observation points. Not only observation points, but also their absence serves as data here. If a vehicle “disappears” for a while, we assume that it’s left the country, explains the Cabotagestudien co-author.

The international transport analysis, on the other hand, is easier.

We track a given vehicle either occasionally or in different countries, and the shape, in which the observation points are arranged, resembles a straight line, explains Filipiak. 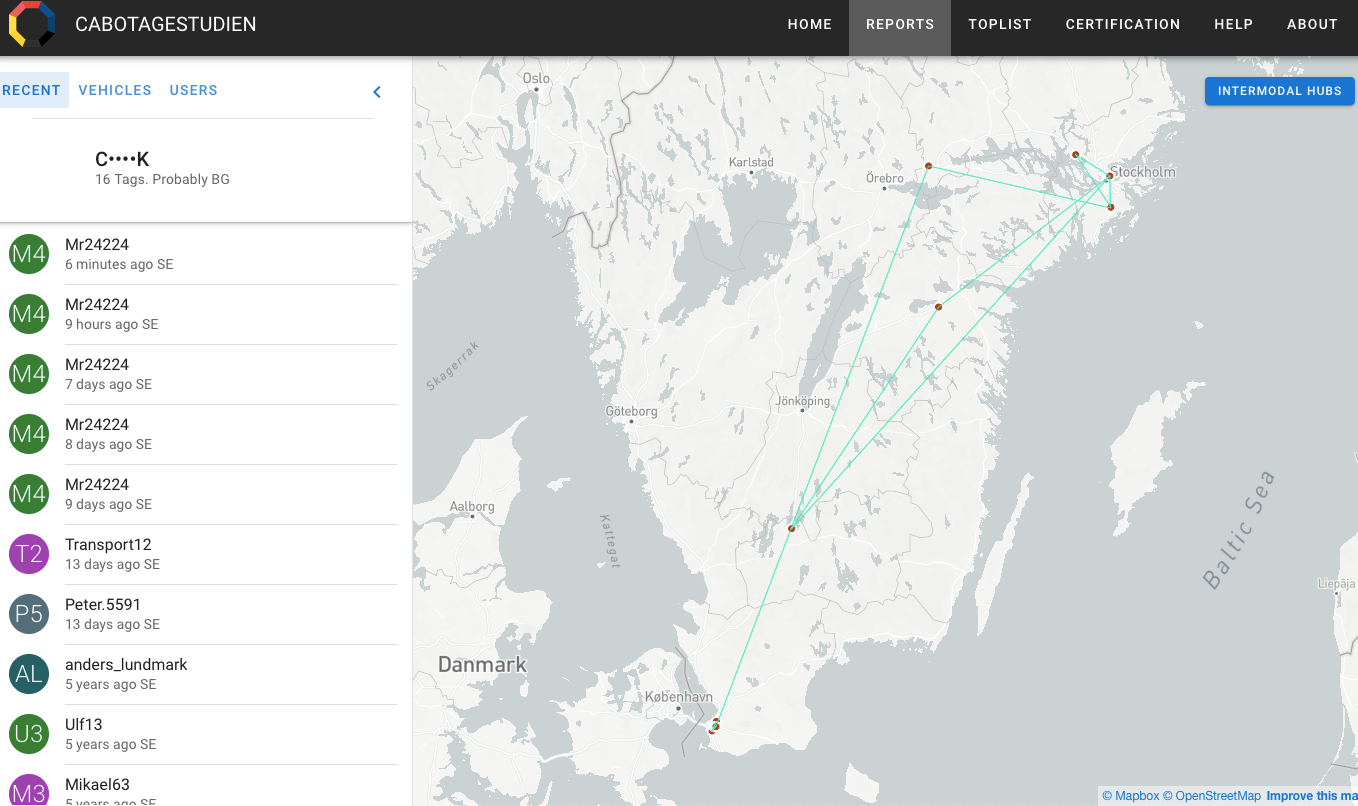 The algorithms validation is extremely important for the study and its credibility. The process ensures that data has been refined to guarantee its quality, and that it is correct and useful.

We’ve compared our observation data to the data from GPS systems provided by the cooperating carriers, and then the analysis performed by the algorithm to the human expert analysis. The analyses were identical for GPS data. In the case of the observation data analysis with no access to GPS data, the algorithm “gave up” in the same instances as the human expert (result: no possibility of classification), Filipiak ensures.

The previous research conducted in 2013-2014 showed that trucks with Polish plates were the most frequently spotted ones in Sweden (18 percent of all nationalities.) They were followed by Bulgaria, Estonia, Lithuania (12 percent each.) As far as the number of all observation points is concerned, i.e. in Norway, Denmark and Sweden, Bulgaria comes first (21 percent), followed by Poland (15 percent), Estonia (14 percent) and Lithuania (9 percent.)

The disproportion is due to the fact that Polish trucks leave Sweden much more often and systematically, while Bulgarian vehicles remain in the country for longer periods. Hence the higher number of Polish plates observed, but less the likelihood to encounter the same plate repeatedly.

This is confirmed by our observations from other countries. A typical Polish truck, which we often see in Sweden, will also be spotted in Denmark or Norway, Michał Filipiak explains.

What also draws attention is the comparison of the number of observations of nationalities with Eurostat data from the individual Member States.

For most countries, Eurostat data are much lower than the observation data (except for Poland and Germany, where the proportions are reversed.) During the analysed period, our algorithm classified over 1,500 vehicles as performing cabotage, nearly 400 of which were either systematically observed in Sweden for more than 7 days, or showed a pattern of performing the fourth and subsequent transports, the expert highlights.

Out of those nearly 400 vehicles, almost half are Bulgarian trucks. Estonia came second (about 16 percent), followed by Poland (approx. 9 percent.) Are we talking about violations?

We avoid giving specific figures and forceful statements, since they are only comprehensible in the broad context. We need to take into account the absolute number of observations, trends of Cabotagestudien users, etc. I believe that with the second report edition we will be able to give much more “bold” figures, as the data collection and analysis methodology that we currently apply will be more refined, emphasises the co-author of the project.

“I will only mention here that the numbers alone do not illustrate the problem of cabotage in its entirety. On the one hand, we are dealing with carriers performing one transport too many, and on the other hand, with carriers for whom illegal activity is their modus operandi. I think that the quality difference is significant, even in the context of the Mobility Package being introduced,” added Filipiak.