Yet more growth in shipping routes between Ireland and European mainland

A new Irish terminal has opened at the French ferry port of Dunkirk, bringing the number of Ireland-France shipping routes up from 12 to 44 since Brexit. Moreover, Grimaldi Lines is also reportedly looking to double its sailings from Cork to Antwerp and Zeebrugge. 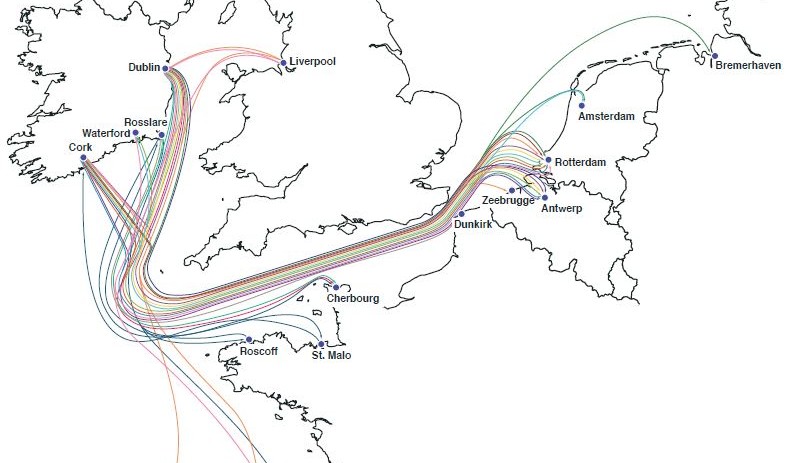 “The whole port, the [Nord Pas de Calais] region, the [Dunkirk] chamber of commerce, is behind this, to get even more connections to Ireland. We only had 12 direct routes to France before Brexit, now it’s 44. We are looking as well next summer towards tourism to get Irish tourists into this region, but also of course, tourists from Northern France, Belgium, Holland and Germany. They have more direct routes into Ireland too.”

Torben Carlsen, the chief executive of DFDS, also spoke to RTÉ News about the demand for Ireland-France routes:

“This was something that is in response to Brexit. It was clear, also to our Irish partners, that Irish exporters would be seriously suffering, potentially due to the difficulties of paperwork and delays. Lately also the [suffering from the] driver shortage you can see in the UK. So there was a demand for a direct link between Ireland and the EU, most specifically France, and we responded to that need.”

The extent to which Ireland is now connected directly to mainland Europe is illustrated via the graphic below, which was published on Twitter by the Irish Foreign Ministry yesterday.

Meanwhile, Grimaldi Lines is said to be looking to double its sailings from the Port of Cork to to Antwerp and Zeebrugge.

Antonio Raimo, Line Manager of Grimaldi Group, told a group of logistics journalists at the weekend:

“We have really put Cork on the map as the third Irish Brexit bypass port. Dublin is too expensive and too saturated with all the Brexit troubles. Our line focuses primarily on trailers and only to a limited extent on containers. And the volumes are growing weekly. Especially after the summer it started to go fast. We therefore want to deploy a second ship from January 2022 and double the frequency to four sailings per week between Zeebrugge and Cork, with two calls in Antwerp. With our new service, the aim is not to disrupt the market, but rather to ride the wave of growth in trailer traffic that no longer wishes to use the UK landbridge.”