Driver treated like ‘the Riders of the Apocalypse’. He is not allowed to see his son because of the fear of coronavirus 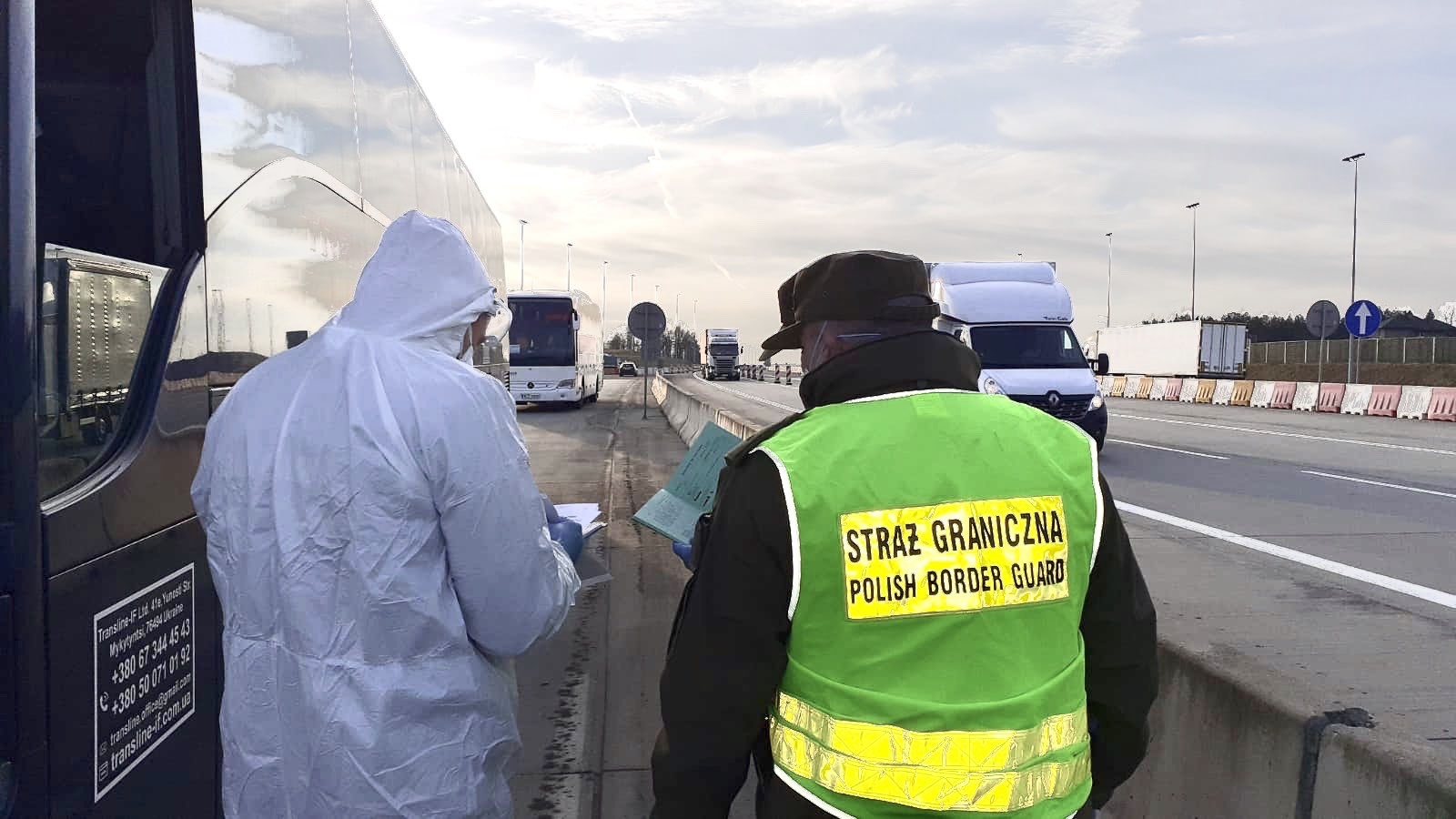 “The day has come that after almost eight years of driving I can call myself ‘the Rider of the Apocalypse’. I go here and there so that some people can put food on the table at this difficult time. Keep your fingers crossed! Maybe someone will finally appreciate what we do every day,” wrote the driver on Twitter. After 12 hours, he got 1,500 reactions. The post was forwarded e.g. by the Speaker of the Polish Seym, Elżbieta Witek.

The real name of the Rider of the Apocalypse is Krystian Przestrzelski. The young man is to get married in August (if it goes well, because a few days ago at the registry office he heard that it is not known whether there will be any weddings during the holidays). Right now he is driving from Łódź to Denmark with a load of frozen chickens.

He didn’t expect that his post would become so popular. He surely is not an influencer and uses Twitter mainly to read the news. He just wanted to write down something he had been thinking about since the beginning of closing down the borders, warehouses and toilets at the plants.

We’re sorry! Not only the toilet is closed

“Transport is the bloodstream of the global economy. If we stop, it’ll all stop,” explains Krystian Przestrzelski.

Only this bloodstream, or more precisely, the drivers who provide it, do not have it easy.

“I was not allowed to take a shower at the company to which I deliver goods, and during the weekend, I was using the toilet in a nearby construction market. When I sat on a bench in front of it a while longer yesterday to use its free Wi-Fi, I was told not to sit like that…,” wrote a driver on our Facebook.

“Ha, gratitude! Even the toilets cannot be used at stations or companies. Going on the road for a whole week, where am I supposed to deal with my physiological needs? The Middle Ages,” added another. And added a picture. A piece of paper attached to the door delivers a short and simple message.

“We’re sorry! Toilets are closed. Please use the disinfectants available at the cash desk.” 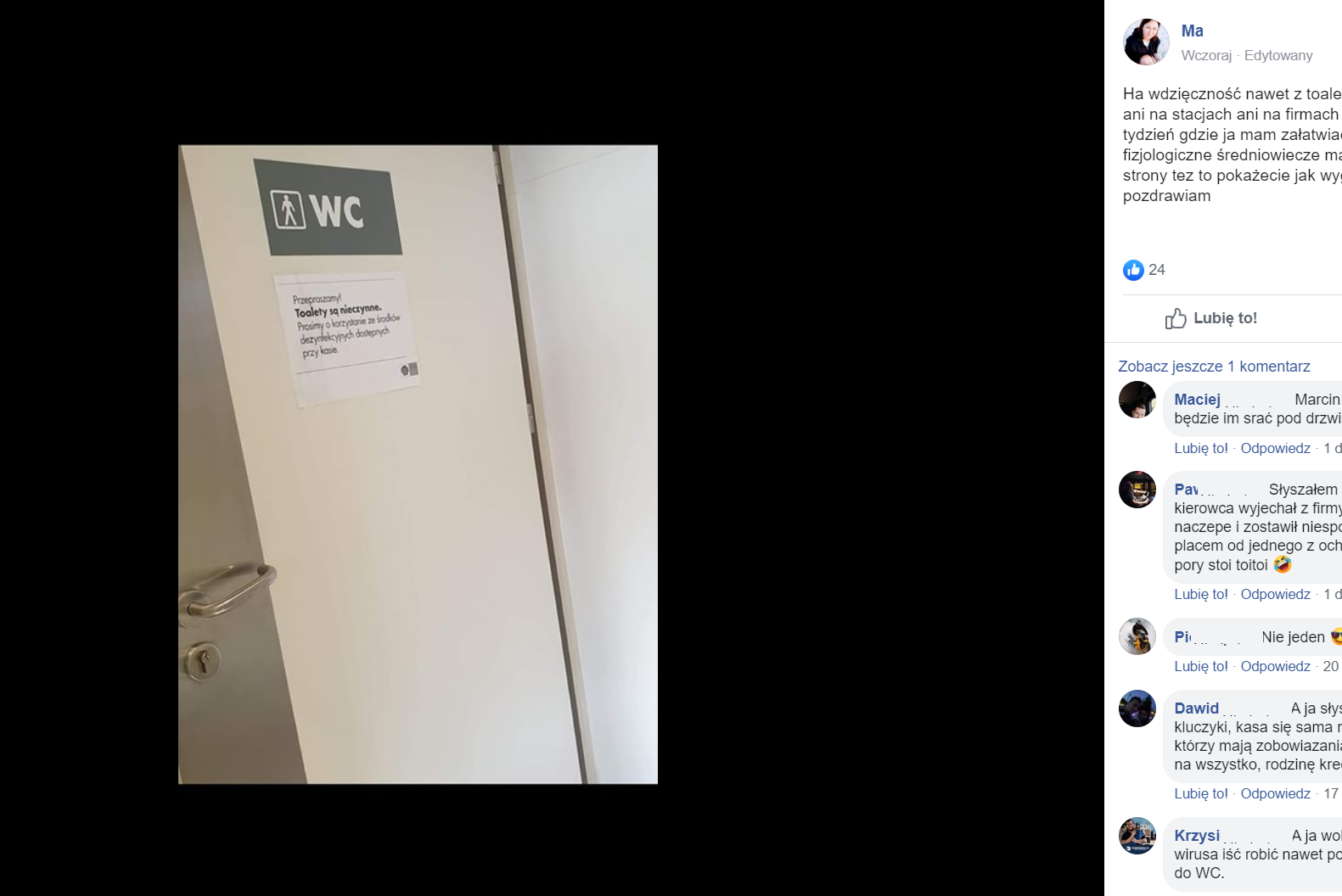 It happens that showers in warehouses can’t be used. Or restaurants are closed. You should sit in the cab and do not move.

Krystian Przestrzelski even agrees with that, because in fact, sitting in the cab makes sense, as it ensures his safety too. Of course the limitations should be reasonable. He got pissed off in one location near Mszczonów. From 10:30 p.m. he waited for unloading and only heard ‘sit in the vehicle, wait for a call’. Drive up. Somebody’s gonna come for a seal soon, but don’t come out!

“Well, I’d go to the office there, make a fuss, but it’d be even bigger fuss that I got out of the vehicle. And I just want to know – couldn’t it have been done faster? We all have to plan further work somehow,” he explains.

One wipe for the entire cab

Marian Mrożek (driver’s details changed at his request) must also equip himself with patience. He’s been waiting for an order at Manchester since yesterday. He suspects that shippers are fighting for orders. He drives for a large company that specialises in automotive industry transports and the workload might drop because of the coronavirus.

Yesterday, three guys left the parking lot after two days. Well, all we have to wait. And so far he’s been lucky. He drove across Europe a few days ago, and one after another the borders were closing behind him. He saw groups of policemen lining up at border crossings with Germany. They were still letting people go. He saw how at a big parking lot in the Netherlands, in a restaurant, people were partying. He kept going on and just rubbed his eyes.

“In a port in France, I was surprised that there were no obstacles. No one was wearing masks, the woman who checked the tickets was also without any protection. Everybody traditionally went upstairs, sat in one big group. I wrapped a bandana around my face to protect myself a bit. Honestly, I was a little afraid. I wasn’t comfortable sitting there. Every driver should be ordered to sit in the cab, after all, we have families that could get infected,” he complains.

This is all the more so because it is already difficult to protect yourself from the disease on the way. And it’s not the drivers’ fault.

“When I was going on the road, I had to confirm the reception of masks at work. There weren’t many of them, just one for each driver. But the employer is covered. We didn’t get any disinfectants, gloves. Everyone protects himself on his own,” says Mrożek.

He only had enough time to buy half a liter of vodka before he left. He hasn’t drunk in years. He just wanted to at least have something to disinfect his hands with.

He was stunned at unloading in the UK.

“They gave me a leaflet with instructions at the gate. The leaflet said to clean the entire cabin with one antibacterial wipe. I asked them if them meant inside or outside,” he wrote

Then it was even worse – he went to the toilet (surprisingly open to drivers), but he didn’t refresh himself too much, because there were no disinfectants, and there was only cold water in the tap. He reported it at the entrance gate, they just shrugged their shoulders.

It wasn’t the first and not the last time he just had to pour vodka on his hands.

They won’t allow him to see his son

You can sense that people feel insecure. During the last unloading, the first thing Krystian Przestrzelski heard was not ‘good morning’, but ‘show your forehead, we need to check your temperature’. He follows orders because he feels it makes sense. He takes care of himself as much as he can. Vitamin C, frequent hand washing and covering the curtain in the parking lot – no going out to people.

Marian is just as careful. When recently one driver in the parking lot wanted to exchange a handshake, he kindly refused. The guy was a little offended, but nothing could be done. A nice guy, but irresponsible, he approached everyone he talked to very closely. Another colleague from the parking lot took on a completely different strategy. He only talked through a closed window. He said he bought toiletries not in vain and didn’t want to expose his only lungs now.

Especially since you have to think not only about yourself. You need to think about everyone around you, but also about the family you return to. And the family is really worried about him.

My current partner works in the health service. She’s very concerned because she knows how things look there, what the hospitals are lacking, etc. She wasn’t happy that I was leaving. She said I shouldn’t go on this route. So I told her – you shouldn’t go to work either,” recalls Marian.

He had to go now to get back faster – right for the trial. His ex-wife wants to raise alimony on his son. She already said that when Marian comes back, she won’t allow him to visit his kid. But that doesn’t surprise him. That, he says, is reasonable.

Krystian’s family did not ask him not to go. At least his wife didn’t do it severely.

They know I can’t take a break from work. I am a carrier – driver, I have repayment obligations. When there are no kilometers driven, there is no money received. And I’m lucky that I have done with paying for the car leasings. But there are other obligations that can not wait – he explains.

A lot of drivers are trapped in a situation like his. Those who work under a zero-hour contract or subcontractors – in the absence of kilometres driven, they may not see any money. Those on a contract, which will happen, for example, quarantine, will get health benefits, but they are poor because they are calculated from the basic salary, which is small.

Krystian is slowly getting a bit tired of all this: problems with money, the fight against the insurance company that he had to fight when the laden car landed in a ditch. Fighting for loads. That is why he intends to sell the truck and take a break from transport. Do something else, but not yet. As he says – after all.

I don’t want to play some great hero because that’s not the point. Just as doctors do their work today, so do we. And it’s just cool that people are finally beginning to notice what it is about. They were not aware until now. For them, electricity comes from the wall, and milk „appears” in the store. They do not realize that behind this, there is a whole long chain of producers and suppliers through whom all these goods had to go through them – explains Krystian.

– Now fellow people at work are asking me where I was doing my driving license. They say that they may retrain because there is always work in transport – Marian echoes. – I just talked with a friend of a driver and we came to the conclusion that now they all thank us, and as soon as a few come back from the sick leave, they will begin to point at us. That we are extending the disease. I am a bit afraid of these social reactions, they can be very changeable.

„You can often see posts that we are important. But for most people, we are the threat because we travel around Europe (…) when I recently entered our local store, there was silence in the store and a distance from me ”- the reader writes to us.

„Maybe this is a good time to end hating us drivers. Not that anyone would adore us, but maybe at least a few people would look a little different because of it … So far I’m a threat because I travel around Europe … „- another one echoes.

But Marian doesn’t think much about these reactions yet.

I believe that everyone should mind their own business in this situation, because as they say – you can sit at home, fall over and die – he adds. – In a sense, I’m even delighted to do this job. I am from the ’74 generation, brought up during socialism. At least I know I’m doing something useful in this situation, and I’m not just sitting at home in front of the internet or talking nonsense.