As more countries are introducing quarantines, border controls and health checks, freight transportation is under a higher pressure to fulfil shippings successfully. By today, Hungary, Schleswig-Holstein and Saxony have suspended the weekend traffic ban for trucks to help carriers and the entire supply chain.

The Hungarian Ministry of Innovation and Technology announced on Thursday evening that the weekend traffic ban for heavy goods vehicles in Hungary was suspended. The suspension is in force until it is revoked.

The suspension of the restriction will allow companies to organize their transportation tasks more flexibly. Companies in the retail sector will thus be able to ensure a  smoother supply of stores, replenishment of inventory, and customer service, the release said.” – the minister added.

Austria has suspended the Saturday traffic ban on Brenner. It is a restriction that applies only in the winter for heavy goods vehicles, from 7:00 to 15:00 each Saturday. According to the head of the Tyrolean government, Günther Platter, there had been huge traffic jams on the border with Italy. Platter emphasizes that the suspension of the ban is to maintain the security of supplies. Tomorrow’s morning traffic ban for trucks was to be the last in this winter season.

However, we remind you that the traffic ban from 15:00 on Saturday to Sunday at 22:00 is still in force. The restriction applies to tractors with trailers with GVW of the tractor or the trailer over 3.5 tonnes, trucks, articulated vehicles with GVW exceeding 7.5 tonnes.

Schleswig-Holstein has also lifted the weekend truck ban so that retailers can receive hygiene and food products. The Federal Ministry of Transport and Digital Infrastructure appeals to all German federal states to loosen the restrictions.

Due to the spreading coronavirus, another German state decided to ease the Sunday and holiday ban on truck traffic. However, it only applies to hygiene products and foodstuffs with a long shelf life. This is the fourth state (after North Rhine-Westphalia, Bavaria and Lower Saxony) that has implemented this solution.

The truck traffic ban in Schleswig-Holstein is suspended until May 30, but, as the Land Transport Ministry explains, this measure can be extended if the need arises.

Saxony also decided to loosen the ban on truck traffic on Sundays and public holidays. As in the case of Lower Saxony, the exemption from the restriction covered the transporting of articles with a long shelf life and hygiene products. The ordinance of the Land Ministry is to be in force until the beginning of April.

In recent days, rice, pasta, canned goods and cakes in Saxony were sold without restrictions. „Basic delivery is definitely guaranteed,” Glaser emphasized. However, in order for supermarkets to offer the entire range, the supply chain had to be adapted.

Lifting the ban across the country?

Sunday ban on truck traffic is to be suspended entirely throughout Germany at least until the end of April, stated Enak Ferlemann, Secretary of State at the Federal Ministry of Transport and Digital Infrastructure (BMVI) on Wednesday during the meeting of the Transport Committee. He also stated that the implementation of the solution was agreed during a conference call between BMVI and 16 transport ministers of the states and representatives of associations operating in the transport industry.

Ferlemann explained that it was about securing food and hygiene supplies in the difficult situation of the spreading coronavirus.

In his opinion, one should also take into account the possibility of working on Sunday – as we read in the official statement on the website of the German Bundestag.

BMVI stays in touch with the Federal Ministry of Labor and Social Affairs. According to Ferlemann, lifting the Sunday driving ban will be pointless if stores do not unload deliveries.

We will keep you updated on further details and subsequent federal states lifting the ban on truck traffic. However, you can check the current situation related to coronavirus in Europe on the map below: 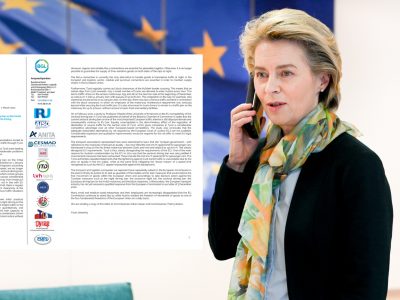 13 countries urge the European Commission to stop HGV bans in Tyrol
Truck bans in Germany in 2021
Weekend lorry bans apply in Italy again after a year-long break
Truck bans in Austria in 2021
Germany: new restrictions for drivers coming from Moselle, Sweden and Hungary