Ireland’s customs and tax authority, Revenue, has announced a temporary relaxation on customs checks so as to allow goods to flow into the country from the UK without further delay.

Revenue say their ICT systems are fully operational, stable and working as intended, with thousands of customs declarations having been processed in the last number of days.

However, due to some businesses experiencing difficulties in lodging their safety & security ENS declaration in respect of RoRo goods movements, Revenue has introduced a temporary relaxation to alleviate the situation.

Those difficulties, as well as other problems caused by the new UK-EU trade deal arrangements, have led to there being some empty shelves in supermarkets in both the Republic of Ireland and Northern Ireland.

Given that more disruption is expected as more trucks make the trip across the Irish Sea, the move from Revenue is not surprising.

“The easement will benefit the haulage sector who are responsible for safety and security declarations and in turn generating the pre-boarding notification, which is needed to board a ferry.”

The details related to the relaxation of the rules are as follows:

Revenue say the MRN above can be used, from now, on a temporary basis as an ENS MRN in situations were it has not been possible to generate one due to the absence of key information or because of other impediments that prevent  the completion of the ENS process.

Those that use this temporary facilitation will signal to Revenue that they need support. Revenue add that hauliers who avail of this facilitation are required to provide contact details to ENSenquiry@revenue.ie.

More details can be found on the Revenue website here.

Meanwhile, Andrew Kinsella, managing director of Gwynedd Shipping in Wales, has told the BBC that his company has a backlog of 60 lorries waiting to be shipped to Dublin.

This is despite the fact that freight traffic at Holyhead port has dropped to between 30% and 40% of its capacity. Indeed, the traffic has now dropped so much that Stena Line has cancelled 12 sailings planned during the next five days.

On Monday, RHA director Rod McKenzie warned about both „visible” and „invisible” queues of lorries growing in the coming weeks:

Well, actually, it could have been like that [long queues of lorries under no deal]. But the difference between deal and no deal was just about tariffs and quotas. So we’re very glad there is a deal. But what we might get instead of visible queues like we had before Christmas is invisible queues. And what I mean by that is if you haven’t done your paperwork, if your driver hasn’t had his COVID test, you will not be able to leave. The lorry will not leave the Depo or the loading center or wherever it’s got to go from. And of course, those are queues you can’t see. But they do affect the supply chain because it means the lorry isn’t moving. And that’s one of the big unknowns that we’re facing. So not so much queues around Dover, but more queues elsewhere back at depo.

Kinsella also mentioned similar during his interview with the BBC yesterday:

What about the UK/France border?

When it comes to the Dover and Calais crossing, truck traffic is also much lower than usual.

On a standard day, anything from 6,000 to 9,000 HGVs may cross the channel. However, according to The Guardian, the Department for Transport confirmed that just over 2,000 HGVs made the journey on Wednesday. Of those trucks, 90% were said to be „border ready”.

The reduced amount of traffic so far has made life relatively simple for truckers delivering loads to and from the UK and the EU. In many cases, lorries have gone through customs in minutes. However, inaccuracies with paperwork have seen some drivers held back for several hours. 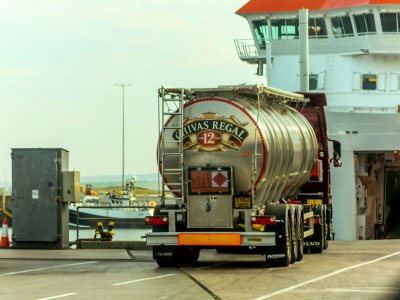 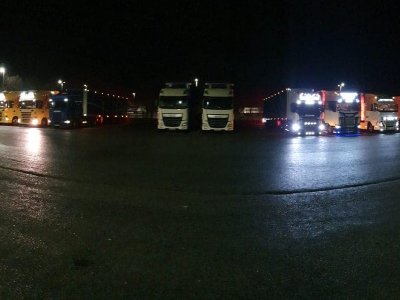 Seafood trucks descend on London in...