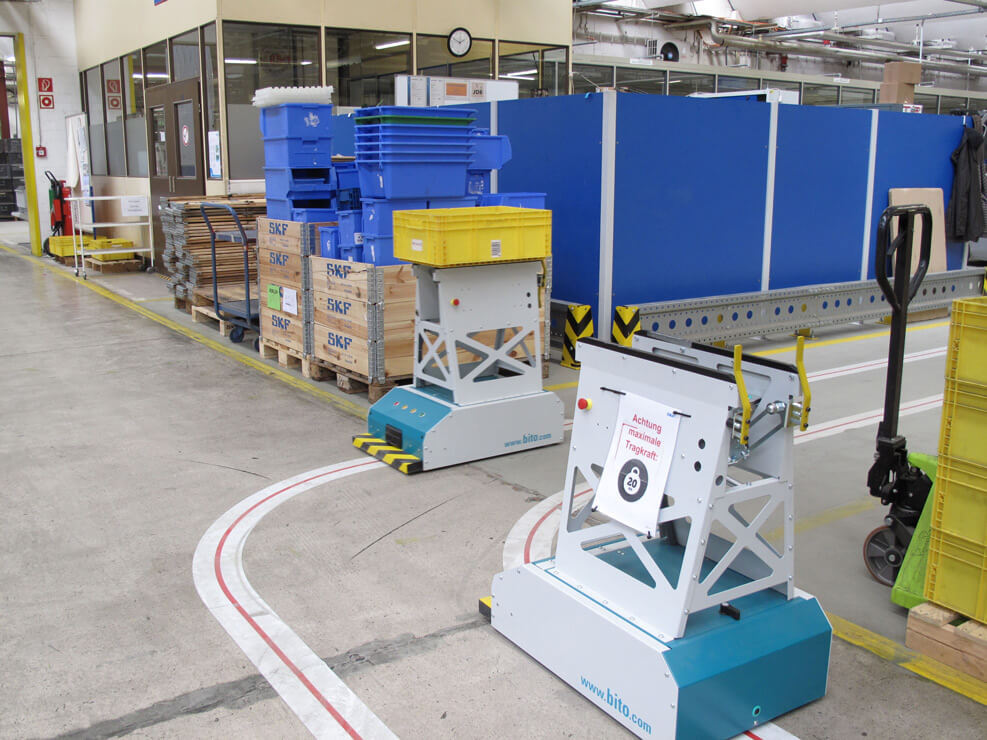 SKF Lubrication Systems (commonly known as LubSys) is based in Berlin and manufactures central lubrication systems. Thousands of components from external suppliers are required for production. The challenge for the logistics services is therefore quite considerable.

Various components are required for production, in total there are approximately 70,000 active, permanent sets of parts available from suppliers. Nearly one-third of the articles are on stock in the warehouse, while parts that are not in stock or missing parts have to be ordered regularly.

In the past, the missing parts ordered were collected by employees and packed on pallets when they arrived at the goods receiving station. The parts were only released to the assembly stations when the pallet was fully loaded. The collection took quite a long time, which meant that the waiting time of the pallet, i.e. the missing parts, was also very long.

The increasing number of orders, as well as pressure for a fast delivery time,  forced the management of the company to make changes.

The aim of the proposed solutions was to significantly improve the assembly of the sets in the Berlin plant. It was considered that the key to this task is a quick and easy supply of components to assembly lines, and this can be achieved e.g. through automation of internal transport routes (reduction of transport time and, above all, reduction of waiting time). A precondition was that the means of transport used must be able to move loads of up to approximately 30 kg.

LEO Locative is an automated battery-operated system for the transport of bins and cartons (min. 200 x 350 mm to the max. 600 x 400 mm). The principle is simple: the LEO Locative vehicle takes over the box at the transfer station and passes it on.

LEO is navigated using paths marked with coloured tapes glued to the floor. A standard template makes it easy to install the path. Available in several quality levels – Flex, Robust and Ultra. Adequate markers are the heart of the LEO locating system. Thanks to this, LEO Locative can be programmed, changed and set at any time. By using markers and paths it is possible to create any desired process. Emergency stop buttons on both sides allow manual shutdown in case of danger. A special sensor can see any obstacles on the route.

In the case of SKF, two such systems work continuously to transport light bins and cartons, linking the workstations together. The location of stopping stations (where the trucks give or take back the bins) is decided by the vehicle user himself.

In this case, according to LubSys requirements, a circular route of 300 m was created, with the help of a colourful adhesive tape included in the starter kit, on which the transporter moves. In this way, it supplies assembly stations with materials.

At the stations, the truck picks up plastic bins containing parts and components. They are transported through the hall and handed over to the recipient at the final station.

A key benefit for SKF is the time saving, the parts appearing at the goods receiving station are now transported directly to the assembly station every three minutes. Transport time and standstill time were reduced. Each LEO Locative covers a daily distance of about 40 km, driving one meter per second.