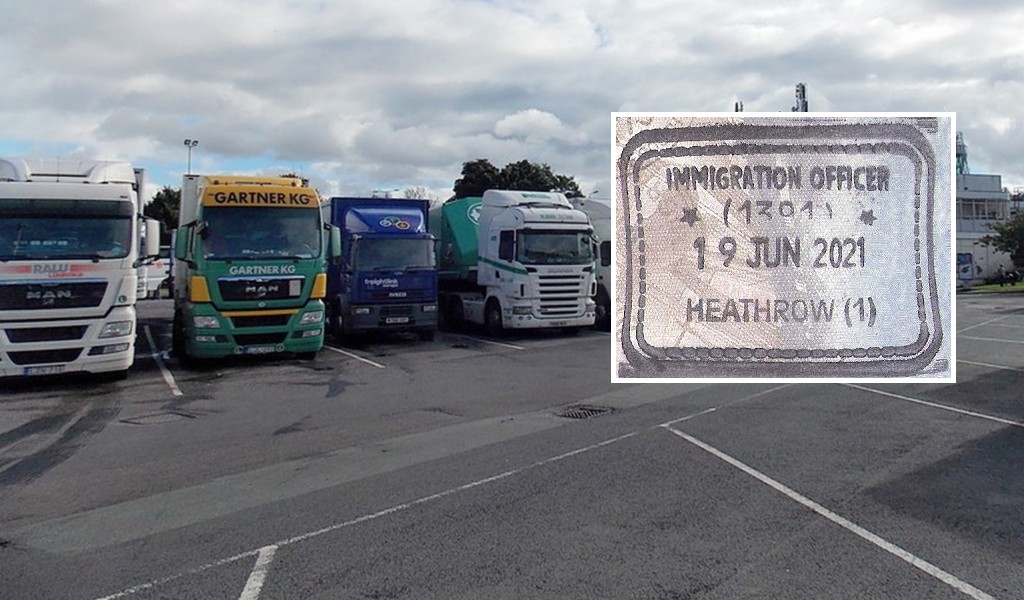 The Road Haulage Association is continuing to campaign for increased measures to alleviate the shortage of lorry drivers in the UK. Having already urged the public to email their MPs about the issue, the RHA has now increased the number of measures it wants introduced from 6 to 12 – one of which is a seasonal visa scheme for qualified HGV drivers.

Some 6 weeks ago, the Road Haulage Association published a statement calling for 6 key measures to be implemented to reduce the driver shortage problem. Among the solutions presented were funding for driver training and for lorry drivers to be added to the occupation shortage list.

However, despite weeks of campaigning and media appearances, the campaign hasn’t yet yielded the results the RHA is looking for. UK Government ministers did increase the funding limit for Large Goods Vehicles apprenticeships to £7,000, but little else has been forthcoming.

In a statement published earlier this week, RHA Chief Executive Richard Burnett said that the UK Government needs to do more:

We need Government to act and address the driver shortage for the industry and the drivers. While we welcome the increase in HGV apprenticeship funding to £7,000, this barely scratches the surface of the problem.

The RHA warns that freight rates are rising to a level that operators are finding unsustainable, and that the costs will have to be passed on to British consumers. It says that the driver shortage has now hit “catastrophic proportions”.

Moreover, besides pushing up rates, the driver shortage is also causing fresh food to go to waste according to Tim O’Malley, Managing Director of Nationwide Produce:

The acute shortage of HGV drivers is now the direct cause of perfectly good, graded and packed fresh produce being dumped or left rotting in cold stores, waiting for wheels to go under it. Supermarket shelves and restaurant plates are going empty, and this is now a crisis of national importance. In all my years in fresh produce I’ve never seen anything like this.

In order to remedy the issue, the RHA has published its 12-point plan, which covers the following:

Two of the above measures, the inclusion of HGV drivers on the Skilled Worker Shortage Occupation List, and the seasonal visa scheme, would both make it easier for road transport firms to hire HGV drivers from all over the world. As the post-Brexit work and immigration rules no longer give EU-nationals a clear advantage, hauliers could potentially use the two aforementioned measures to employ qualified drivers from countries all over the world – provided their qualifications are accepted.

However, although those two measures would indeed make it easier to employ foreign drivers, the process would by no means be straightforward. According to the UK Government’s website, Skilled Worker visas cost £464 for someone staying in the UK for less 3 years (£55 less for workers from most European countries). Moreover, in most cases, workers using this visa will also need to have at least £1,270 available in their bank account. In addition, there is also the matter of a £624 healthcare surcharge every year. Any truckers employed under the scheme would have to be paid at least £10.10 per hour.

As for the seasonal visa scheme, workers will need to be in a possession of a Certificate of Sponsorship from their employer. The visa costs £244 but is £55 less for workers from most European countries. Workers employed under this visa will not be able to bring family members or claim some benefits.

Given all the costs and red tape involved in processing these visas, both on the part of employees and employers, there is no guarantee that either of these pathways will significantly heal the UK’s driver shortage problem either. Just over 6 months ago, when the UK was part of the EU single market, qualified truckers from over 30 EU and EEA countries could be employed in the UK with next to no paperwork or additional costs.

On the other hand, although the visa schemes may be the most stand-out items on the RHA’s wishlist, it must be said that the vast majority of the actions it wants introduced concern driver training. As the RHA has pointed out, the cost of training is a major barrier to anyone who fancies becoming a truck driver.

Last week, Kent haulier Nicholls Transport revealed that it is currently stumping up 50% of the training costs in order to recruit new drivers.

Evidence of the UK driver shortage, as well as labour shortages elsewhere in the logistics industry, is also apparent in the ManpowerGroup Employment Outlook Survey for Q3 2021. According to the survey results, staff in operations and logistics are by far the most in-demand in the country.

In addition, a UK tabloid newspaper states that the ManpowerGroup’s research finds that truck drivers can earn salaries 20% higher than last year (though it must be stressed there was no mention of this in the survey document). 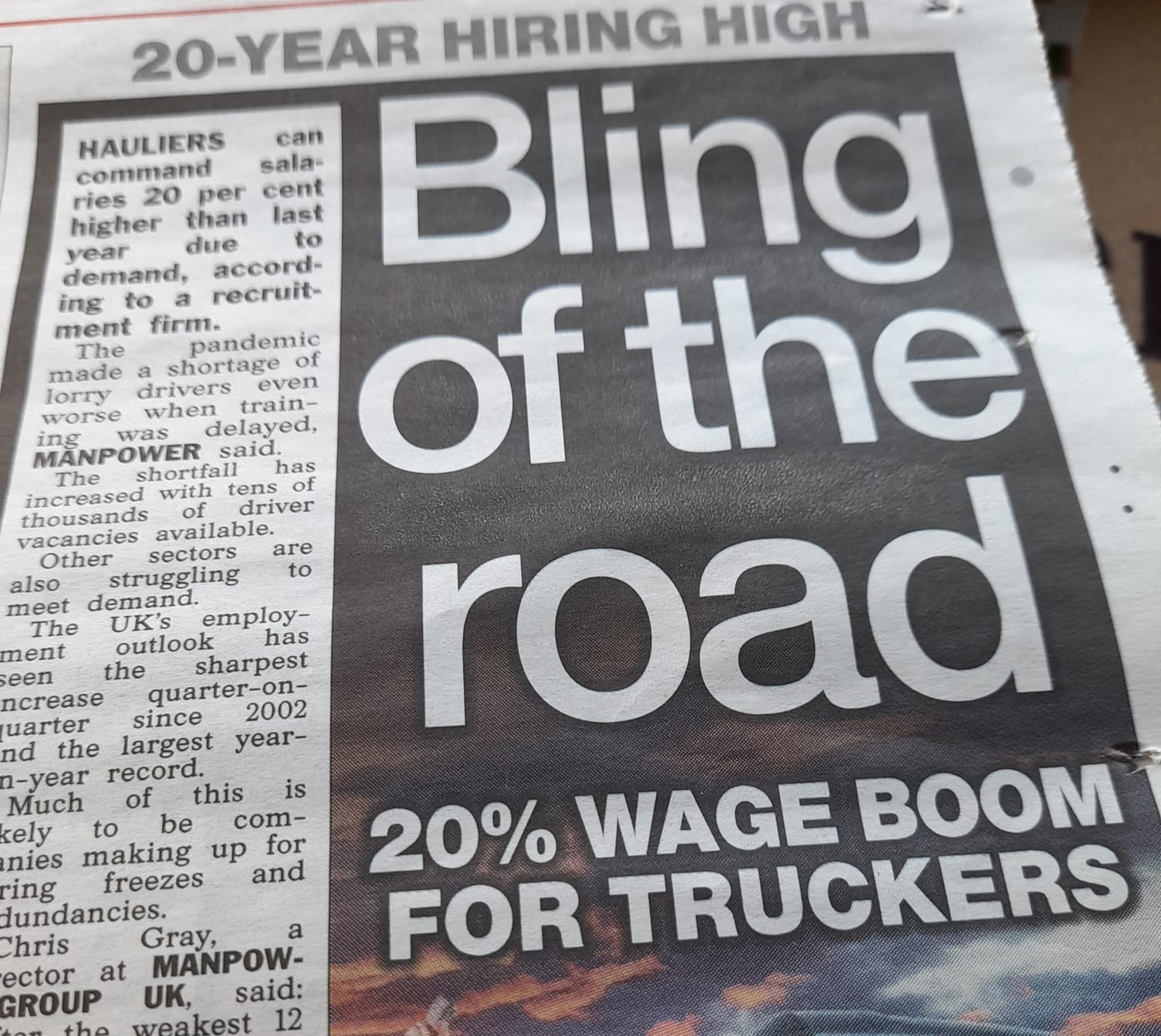 The report photographed above has nonetheless been met with scepticism by many British lorry drivers over on the Professional HGV Drivers UK Facebook Group. The number of responses containing the words “bullsh*t” and “b*llocks” indicates that 20% pay increases haven’t been the norm in the last 12 months.

However, a small minority of truckers in the aforementioned Facebook group did say they had received a pay rise in the last year. Some companies have also openly stated that they have increased rates. One is example is Owens Group, a Welsh haulage firm. Doug Jeffery, the company’s General Manager, told Business Live yesterday that Owens Group had increased driver pay by 11%:

If available we could employ up to 100 drivers today across its depots. We have trucks parked up because we cannot get drivers. We are failing deliveries, something we have never done in the 50-year history of the company, and our service level KPI’s have dropped off a cliff. Our transport profitability has also taken a major dive, all in all it’s a very serious situation that needs Government support to help resolve the situation and quickly. We have had to increase our drivers’ rate of pay by 11% and we are fortunate that 95% of our customers have supported us in our request for a rate increase. There simply are not the drivers available and we are all fighting for an ever reducing pool of skilled drivers.

The comments from Jeffery are interesting as they come just days after Rod McKenzie, the RHA’s Managing Director of Policy & Public Affairs, said that hauliers couldn’t increase driver pay as they operate on small margins of just 1-2%.

Media reports on the UK driver shortage have been relatively frequent for some months now, and the problem appears to be coming to a head. However, most lorry drivers in the UK maintain that there is indeed no shortage of qualified drivers in the country – the issue is that truckers are leaving the profession due to low pay and poor working conditions.

Provided that the UK Government maintains its stance and does not implement the RHA’s 12-point plan, we may soon see whether that theory is indeed correct.

Do you think the driver shortage will lead to more wage increases for drivers? Let us know in the comments section of our social media profiles.