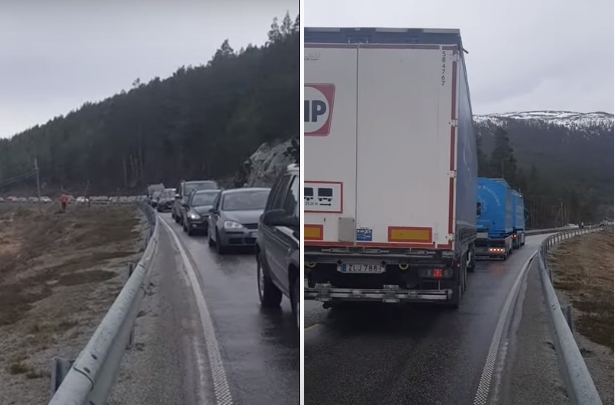 A lorry driver decided to risk his vehicle to save the lives of other motorists when another trucker aggressively attempted several dangerous overtakes on a two-lane road.

Last Wednesday, dozens of vehicles were stuck in a line of traffic near Strynefjellet in Norway. According to the reports of eyewitnesses, there were more than 50 vehicles in the queue, though traffic was moving steadily at approximately 75-80 km/h.

However, a Ukrainian driver in a Polish truck with a Swedish semi-trailer seemingly didn’t have the patience to follow others. As seen in footage uploaded to YouTube, the trucker attempted several overtakes that would almost certainly have resulted in a serious accident.

Many of those who were overtaken called the police. One of them was lorry driver Knut Thronsen, who tried to keep the foreign vehicle behind him to no avail.

Thronsen also called a lorry driver friend who happened to be the one who was driving just in front of the aggressive trucker. After discussing the situation, driver Geir Elling Nyland decided to stop the dangerous lorry by stopping in the middle of the road and not letting him drive on.

I was in doubt about what I should do, but after talking to the police and Thronsen, I chose to stop in the middle of the road to prevent more lives from being endangered on the road. I did it because I knew that the police were on their way to help, and because I knew that Thronsen and others would come quickly and help me. I would not have done it if I had been alone”, said Nyland to at.no.

Police arrived and took the man for questioning. Finally, the driver was released but he was banned from driving in Norway for three months.