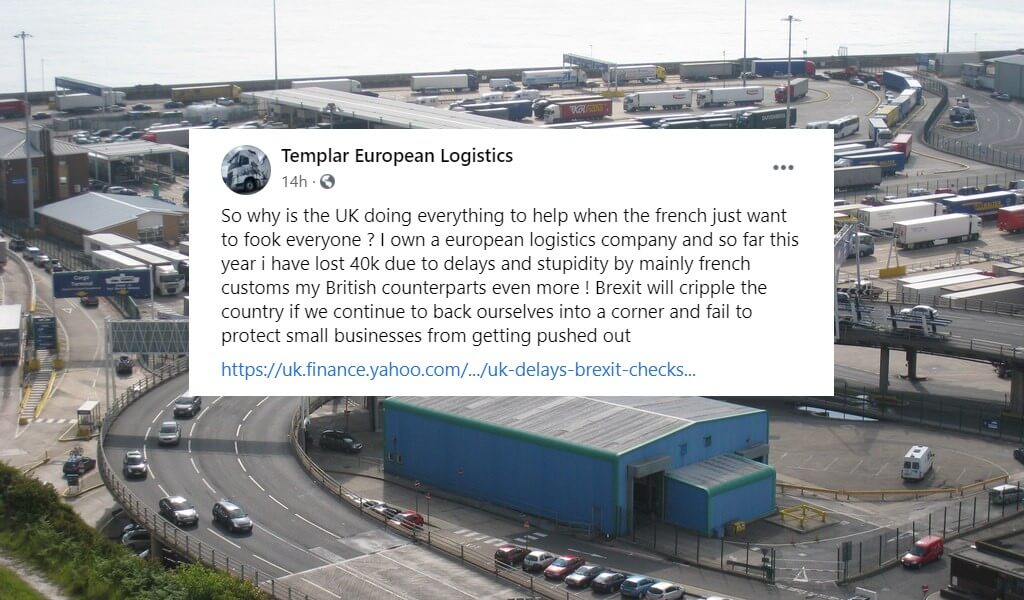 An Englishman’s haulage firm says it has lost £40,000 due to “delays and stupidity” in relation to post-Brexit customs checks on either side of the English Channel.

Templar European Logistics, which is registered in Poland but owned by Englishman Matthew Garnett, revealed the above figure on its Facebook Page yesterday while reacting to news that Great Britain would relax customs checks on EU goods for another 6 months.

Back on January 5th, the company appeared bullish about its Brexit prospects, saying that although Brexit would likely cause some paperwork issues, it was “time to shine”. However, within days the company was left ranting and raging at the damage the new export procedures were having on business.

Since then, the haulage firm appears to have got to grips with a lot of the challenges Brexit has thrown at it. Templar’s Facebook Page shows that its trucks, adorned with historic English figures like Margaret Thatcher and William Churchill, are still transporting meat products all over Europe.

However, the haulier’s Facebook post yesterday said that post-Brexit customs and veterinary checks have cost the company a whopping £40,000 this year alone. The company specialise in the transportation of meat and other chilled food products, which entails more customs checks under the new EU-UK trade deal.

Commenting on the news that the UK would push back customs checks on EU goods, continuing the current disparity between the difficulty of GB-EU exports vs EU-GB exports, Templar’s Facebook Page administrator said that “Brexit will cripple the country if we continue to back ourselves into a corner and fail to protect small businesses from getting pushed out.”

In many respects, the delay in introducing physical checks at the UK border should help haulage firms like Templar European Logistics. However, the company has always worn its British patriotism on its sleeve, and they clearly have concerns about yesterday’s announcement.

A report published by Bloomberg this morning shows that Templar European Logistics are by no means the only entity unimpressed by the delay.

Steve Howell, managing director of food exporter Foodlynx, told Bloomberg that he had reacted with “absolute dismay” to the postponement of UK customs checks. James Ramsbotham, chief executive of the North East England Chamber of Commerce, also told Bloomberg the delay would give foreign businesses a “cost and administration advantage” over their British counterparts. Finally, the report adds that the Cold Chain Federation believes the situation creates an “ongoing unfairness” between companies in the UK and the EU.