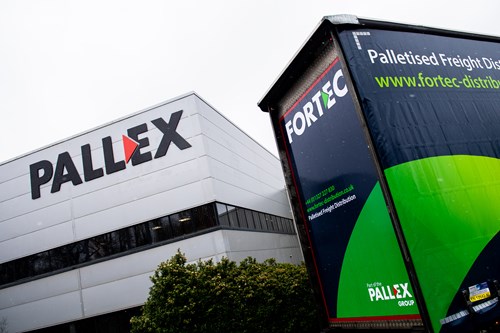 Pallet network the Pall-Ex Group has announced it is collaborating with tech firms The Barcode Warehouse and Honeywell as part of the next phase of its growth plan.

The Pall-Ex Group says it shall purchase more than 500 scanners, mobile and vehicle-mounted computers, including the popular CK65 and Thor VM3, from Honeywell via The Barcode Warehouse. The purchases are intended to support the company’s NexusScan project, which is part of the continued rollout of the Pall-Ex Group’s Nexus Core Operational System.

Pall-Ex says the money spent on the new technology makes up just part of the multi-million pound investment it has made since it began development of the Nexus system.

In addition to the above, Pall-Ex will also receive Honeywell’s Edge services, which it is said will help assist with device deployment, spare pool of devices, rentals and supporting applications through a 24/7 help desk.

As the Pall-Ex Group explains, Nexus is a bespoke system that has been built by its in-house team of developers and successfully rolled out to its entire UK membership. Further rollouts are also planned for both Fortec and international partners.

The aforementioned investment is intended to support the NexusScan project, which will produce a new hub scanning application for the Pall-Ex Group.

Pall-Ex believes Honeywell’s productivity solutions will allow it to accurately process freight transiting through the network. It also adds that the “quality equipment” supplied by Honeywell means that volumes “will be handled in the most efficient manner possible.”

Pall-Ex Group’s Chief Technology Officer, Dave Dunhill, who has an important role in the development of Nexus, said that “key stakeholders were fundamental to the process':

“In conjunction with The Barcode Warehouse, Pall-Ex Group has been through an extremely thorough and robust process. This involved equipment being assessed and having to meet with critical success criteria. Key stakeholders were fundamental to the process which took in excess of six months. The result of this has seen Honeywell selected to supply hardware for the NexusScan hub scanning project which will aid the delivery of the next module of the Nexus project.

Dunhill adds that the Pall-Ex Group’s strategic investments are made to reduce operating costs, drive efficiency and enhance the customer experience.

Another individual with a key role in the project is Annette Dankowski, Client Relationship Manager at The Barcode Warehouse. She says the system will be an “exciting technology refresh for Pall-Ex”:

“We are really pleased to be part of this exciting technology refresh for Pall-Ex and being able to lean on our expert knowledge throughout the process. The success of our partnership with Pall-Ex has been based on trust and openness which has empowered us to provide a best-in-class solution to meet their operational requirements right now and into the future.”

“We’ve designed our mobile computers to be ready for the toughest warehouses and distribution centers while helping mobile workers boost productivity in this time of ever shrinking delivery timeframes. What’s great for enterprises like Pall-Ex – other than being easy to learn and use for mobile workers – is our computers offer a long-life span, helping to reduce the cost to support and help minimize the total cost to own.”