Trucker Baz Scott gives the lowdown on his Scandinavian adventure

One of the benefits of being a trucker is the opportunity to work in new settings, creating a potential adventure in the process. Englishman Baz Scott, who currently plys his trade in northern regions of Scandinavia, is a fine example.

Baz and his partner Rebecca first got a serious taste of Scandinavian trucking via their work delivering test and prestige cars across Europe. However, after transporting vehicles to and from all four corners of the continent, the duo found themselves out of work when lockdowns kicked in.

A few months later, Baz and his partner would nonetheless take up the opportunity to work in the northern regions of Norway, Sweden, and Finland – embarking on an adventure that would see the pair tackle freezing temperatures and heavy snow, not to mention a new culture and way of life.

Baz’s trips to the Arctic Circle have since caught the attention of many social media users, not least because of the trucker’s stunning photos of the Northern Lights. 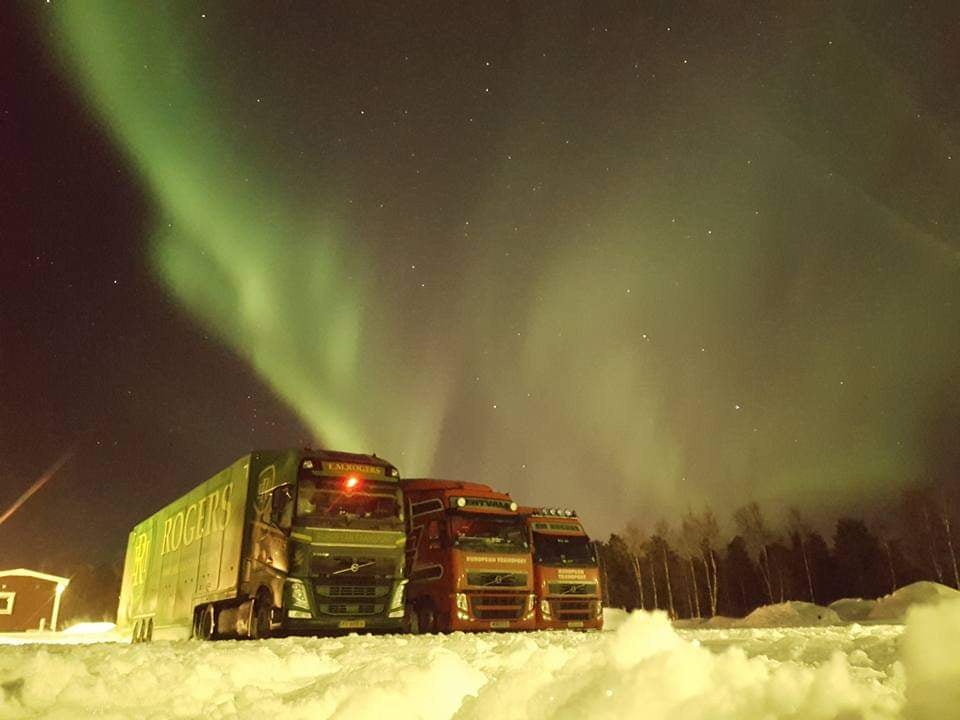 What is it like working in these tough winter conditions though? How did Baz manage to capture a number of photos of the Northern Lights? And has the decision to up sticks and take the plunge in Norway worked out?

To find the answers to these questions, we got in touch with the man himself.

Thanks for talking to us Baz. What’s life been like since the move?

The way life is in Norway and Sweden, I think we’re still very much in our honeymoon period at the moment. We haven’t had a chance to do all of the exciting things yet.

Our experience of it so far is spectacular – the Scandinavians just know how to get every little bit of enjoyment out of nature. There’s real excitement when the snow drops, the snowmobiles and kicksleds come out, the outdoor hut-tubs are fired up, and the winter celebrations begin. They like being out in the snow and nature. We’ve been party to that and really enjoyed it.

We love being out walking – the weekend before last we stopped at the Arctic Circle. It was -33 degrees, we got out and we walked across a frozen lake in the absolute middle of nowhere, just mountains and trees and snow. We also spent some time tracking moose and reindeer through the forest.

Norway is just spectacular; it would be near-impossible to take a photo that didn’t look like a postcard. The contrast between the lakes and mountains often leaves us literally speechless.

What challenges have you faced on the roads in Northern Scandinavia?

It’s very, very different from much of the rest or Europe.  There isn’t anything that we’d recognise as motorways up here, most of our days are spent on winding, single lane roads, barely wide enough for two trucks. Sweden is rather flat for most of it, and it’s quite pedestrian in terms of what the roads are like, but the temperatures seem to be much lower, and more snow than in the west. Norway is very much more rugged – there are plenty of snow-covered mountains of course.

A typical week for us would be two runs of timber from Sweden to Norway, with return loads of biomass for the Swedish power stations. Most of the time this means traversing the mountains in both directions twice a week. 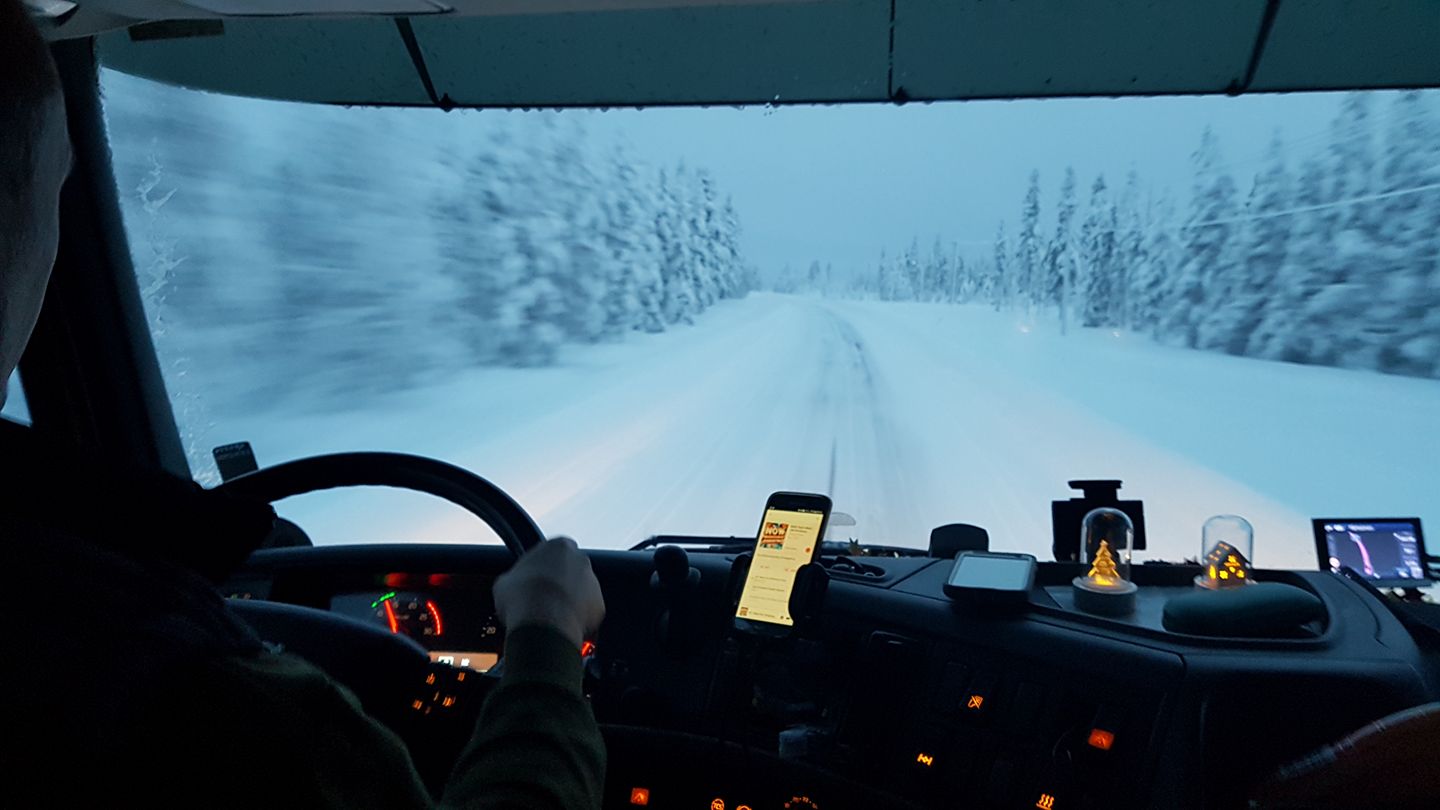 It’s pretty exciting, it’s a job that keeps us on our toes as it’s different every day and we love it. It’s certainly a challenge and the driver has to be very proactive. There’s a lot of planning involved and you need to think a lot further ahead, both in terms of planning your day and general driving.

A lot of the guys have studs in their tyres, though our truck doesn’t. We do of course have chains, though we have only used them once so far this season.

We are constantly astounded by the way that the tyres we use just find grip; on some of these ice-covered 9% gradients we were loaded up to 50 tons, and the truck just goes up and up. I just don’t know how to explain it.

How have you managed to snap up the Northern Lights on more than one occasion?

The main thing is I’m a bit of an idiot for being stood outside the cab at 10 o’clock at night when it’s -30 degrees. A lot of the drivers tend to close the curtains and get the TV on. So a lot of the photos have been taken at a frozen layby at two o’clock in the morning.

Just last night I saw the sky light up and jumped out of the cab to take photos. I think it’s just a case of being constantly prepared for something like that to happen. And often it can be months apart.

How do the working conditions compare to the UK?

Most of the drivers up here seem to work three weeks on and one week off, and the holiday pay is pretty good.

That work/life balance is important – particularly in the winter when you’re working in the dark for most of the time.  Norwegian taxes are much higher than the UK, but there is much more clarity in what you get for your money here, it doesn’t feel like you’re just working to survive.  I often think that the people in the UK, if they were taxed quite heavily, would wonder what it was for and that there doesn’t seem to be any notion of what you get for your money in the UK. That’s different here.

There tends to be more common sense when it comes to health and safety too, which makes things easier. I think drivers need to be considered professionals and should be treated as such.

And what about driver facilities?

Where we are today, up here in the wilderness, there isn’t too much available – maybe a few rest areas, albeit with regularly-serviced, heated toilets. But mostly the facilities are excellent. Many Norwegian hauliers get issued yearly vouchers for their drivers, which  can be exchanged for a thermal coffee mug which can be used for free coffee and discounted food at petrol stations.  Many petrol stations and in-town parking areas have dedicated driver rooms, showers, sometimes washing machines, cooking facilities and even saunas!

It’s really good, I think it encourages drivers to take a little bit of rest and relax and you definitely get the feeling that you’re an important part of the working society.